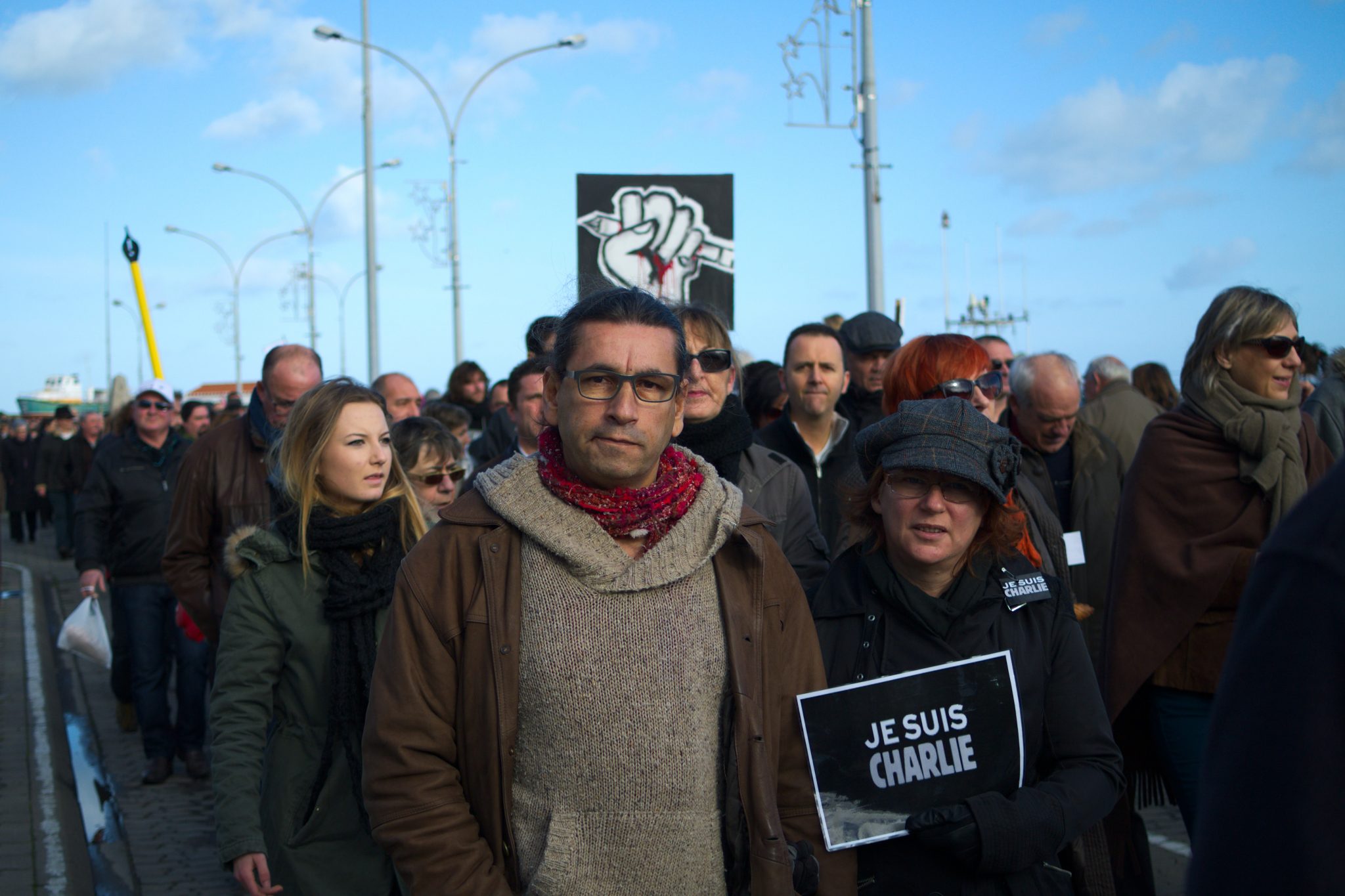 Charlie Hebdo is a left-wing atheist French magazine that publishes news and satire. It became famous in 2012 when it published a dozen editorial cartoons mocking Islam’s Prophet Mohammed and again in 2015 when two Islamic terrorists barged into its offices and murdered almost all of its editors and staff.

Last week, Charlie Hebdo took another action that should make it even more famous, exhibiting a determination and courage that is entirely lacking in the American media and, frankly, every Democrat.

Last Tuesday, the day before the trial began, Charlie Hebdo did an extraordinary thing: it published the Mohammed cartoons again.

This drama began in 2005 when the Danish newspaper Jyllands-Posten published a dozen caricatures of Mohammed. This, of course, enraged radical Muslims because Islamic law prohibits any depiction of Mohammed and labels all such images blasphemy, and because radical Muslims believe they can impose their religion on us. Several terrorist plots against the Danish paper were foiled by Danish intelligence officials and police.

Some of the images were foolish, and some — such as a cartoon depicting a bearded, wild-eyed man with a burning fuse coming out of his turban — seemed disturbingly apt. In 2006, Charlie Hebdo republished the cartoons from Jyllands-Posten. In November 2011, the magazine published an edition titled, “Charia Hebdo,” for which its offices were firebombed. A lawsuit brought by a French Muslim group failed to punish the magazine or curtail its publication.

Then came January 7, 2015. Two Muslim brothers, Cherif and Said Kouachi, forced one of the magazine’s cartoonists to open the building’s cipher lock for them. They entered and murdered Charlie Hebdo editor Stephane Charbonnier, seven staff members, Charbonnier’s police body guard, and a guest.

According to news reports, the Kouachi brothers shouted in Arabic, “Allah is supreme” and “We have avenged the Prophet Mohammed” during and after their killing spree. Police were arriving as the terrorists exited the building. They managed to kill a police officer on the street before escaping.

Coordinated terrorist attacks continued in Paris. On the following day, January 8, a lone terrorist killed a policewoman and injured a man in a suburb south of Paris. On January 9, the Kouachis were finally cornered by French police.

Also on January 9, another Muslim terrorist — Amedy Coulibali — began a shootout with police and entered a kosher grocery store because Jews would be found there. He took several hostages and demanded the release of the Kouachi brothers. Coulibaly was shot and killed when French forces stormed the store. Four hostages were found dead. The Kouachi brothers were also shot and killed.

It was clear that all of these attacks were coordinated. Fourteen of the alleged accomplices in the Charlie Hebdo attack and the attack on the grocery store went on trial last Wednesday. They are accused of providing weapons and logistic support to the terrorists.

And last Tuesday, the day before the trial began, Charlie Hebdo did an extraordinary thing: it published the Mohammed cartoons again, saying they were evidence in the trial. An editorial accompanying the republication said that failing to republish the cartoons would have been an act of “journalistic or political cowardice.” Just so.

The editors, publisher, and staff of Charlie Hebdo deserve enormous praise for republishing the cartoons. They did their best to ensure that their predecessors didn’t die in vain. It was an act of bravery unknown in the American media.

The contrast to American journalism is stark. Very few U.S. media outlets published the cartoons in response to the 2015 attack on Charlie Hebdo and none, as far as I can tell, have done so since.

Our media have consumed themselves in condemning President Trump for every sin, real or imagined. Political correctness has given way to praise for governors and mayors who refuse to put down the riots in their states and cities. Portland, Oregon, has suffered over 100 days of rioting. In Portland, Seattle, and other cities, Democrat mayors defend the anarchists instead of restoring order.

In the eyes of the media, riots are “mostly peaceful” demonstrations rather than violent crimes. Black Lives Matter” has become a media narrative, Antifa goes almost unmentioned, and very few — including this column — have pointed out that all lives matter. As my favorite TV detective, Harry Bosch, always says, everybody matters or nobody matters.

The November elections will soon be upon the two Americas between which we are separated: one that is willing to ignore anarchy to suit its political purposes and one that is bewildered and angry that little or nothing is being done to restore order. The latter, silent as they are because the media willfully ignores them, probably outnumber the former 1,000 times over. Trump’s law and order message is not lost on them.

At this point, scholarly comparisons with the fall of decadent ancient empires is not helpful. Suffice it to ask whether even the tiny minority of Frenchmen who staff Charlie Hebdo are braver than we are.

The courage of Charlie Hebdo in republishing the Mohammed cartoons is a lesson in defending their nation’s culture, religion, and politics against the very dangerous threat of Islamism. We face that threat as much as do the French, if not more so. Appeasing that threat — and the other ideological threats our culture, religion, and freedoms face — is existentially dangerous for our nation.

Those of us who swore to defend America against all enemies, foreign and domestic, never believed that any domestic threat could be as serious and difficult to defeat as it is today. That means we have to be more intelligent, tough, serious, and dedicated to defeating that threat than ever before. It means that every one of us, not only those who have served in the military, has to speak out, to vote, and to defend our religions, politics, and culture as we never have before.

When he was inaugurated governor of California in 1967, Ronald Reagan said, “Freedom is a fragile thing and is never more than one generation away from extinction. It is not ours by inheritance; it must be fought for and defended constantly by each generation, for it comes only once to a people.”

Our freedom is more fragile than it was 53 years ago because too many Americans aren’t interested in defending it. Vote as if your family’s future depended on it. Because it does.