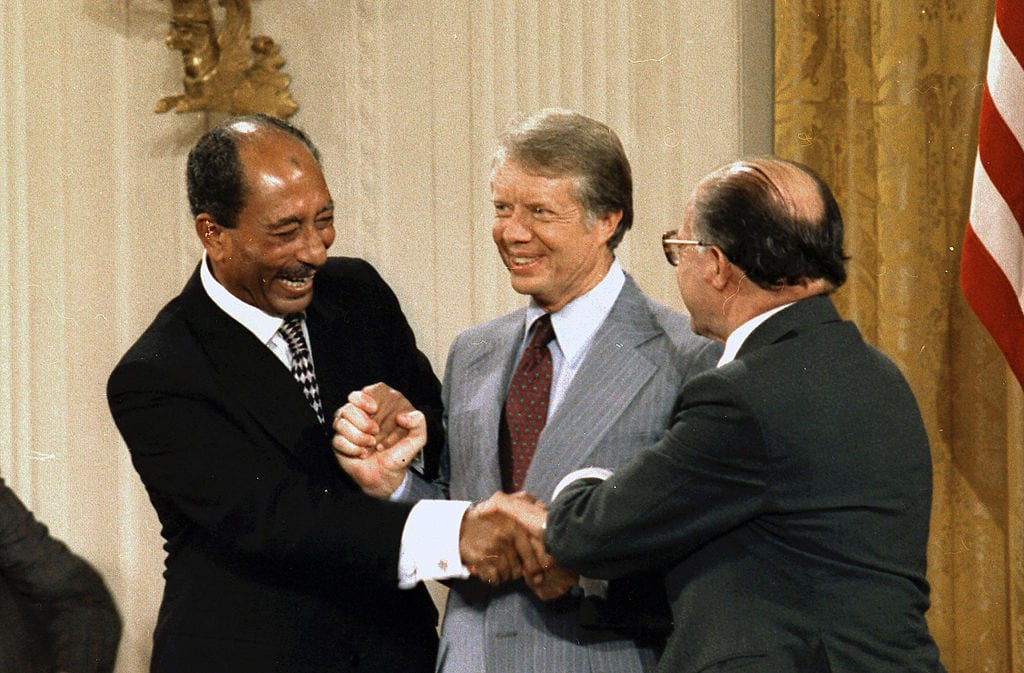 This past month marks 40 years since the Egypt-Israel Camp David Peace Accords and 25 years since the PLO-Israel Oslo Accords. Washington ultimately brokered both accords but they differed dramatically in their implementation. While the Egyptian-Israeli peace remains cold and formal, it is still a relative success. Instead of facing each other in the military battlefield, there are diplomatic relations, extensive intelligence sharing, and anti-terrorism cooperation between Jerusalem and Cairo.

By contrast, the Oslo Accords with PLO largely constitute a failure. Peace between Jerusalem and the Abbas regime in Ramallah appears more distant than ever. Several key differences explain why Camp David succeeded while Oslo failed.

The Camp David Peace Accords were signed by two countries: Egypt and Israel. By contrast, the Oslo Accords were signed by one country — Israel — and a non-state terrorist organization, PLO. The Egyptian-Israeli peace was relatively straightforward in its implementation: Israel ceded the Sinai Peninsula to Egypt in return for a formal peace agreement with Cairo. While hostility towards the Jewish state remains strong in the streets of Cairo, Egypt’s political leadership continues to honor the agreement with Israel, which also provides it with much needed U.S. aid and Israeli technologies.

Egypt’s identity is rooted in its soil. By contrast, PLO and the Palestinian Authority (PA) continue to embrace an identity based exclusively on opposing Israel’s existence. Despite the handshake at the White House between PLO leader Arafat and Israeli Prime Minister Rabin a quarter century ago, PLO has not made any serious transition from a revolutionary terrorist group into a responsible entity with state-building ambitions. Much of the international financial aid earmarked for development ended up in the pockets of the PA leadership headed by Arafat and his successor Abbas. While more subtle than its Islamist rival Hamas in Gaza, the Abbas-led regime in Ramallah has invested far more resources in fighting Israel’s existence than building a peaceful and progressive society next to the Jewish state.

Under normal circumstances, a peace process is supposed to lead to a peaceful conclusion of the conflict. In the case of the Oslo Accords, the PLO never intended to end a conflict that it needs to stay relevant, and which greatly enriches its leadership. While frequently threatening to unilaterally declare independence, the Abbas regime nevertheless appears content to carry on status quo as an “occupied” entity indefinitely. It gives Ramallah valuable international support and financial aid while the onus of making peace remains on Israel. This would end with an implemented peace agreement and explains why Arafat rejected President Clinton’s two-state solution in 2000 and why Abbas rejected the Bush-sponsored two-state solution in Annapolis in 2008.

The concept of land-for-peace worked in Camp David because the conflict between Egypt and Israel was mainly territorial and ended, at least formally, once Israel ceded the entire Sinai Peninsula. By contrast, ceding territory to the PA has escalated the conflict through the establishment of a hostile entity on Israel’s doorstep. While PLO and Hamas are divided in terms of tactics, they both reject Israel’s existence within any borders. In flagrant violation of the Oslo Accords, the “moderate” Abbas regime teaches Arab children to hate Jews and names squares after terrorists who murder Jews in Israel. Since PLO’s/Hamas’s conflict with Israel is existential, nothing less than Israel’s destruction will satisfy the rulers in Gaza and Ramallah.

Within the narrow scope of formal Egyptian-Israeli relations, Camp David was a success. By contrast, the Oslo Accords failed because PLO never intended to honor its commitments by even making a formal cold peace with Israel. As far as PLO and PA are concerned, the Oslo Accords constitute a continuation of the ongoing war against the Jewish state’s very existence. As long as this destructive mindset persists in Gaza and in Ramallah, genuine Arab-Israeli peace will remain a distant pipe dream.

Daniel Krygier is a writer and political analyst based in Israel. He is a contributor to the news and public policy group Haym Salomon Center.