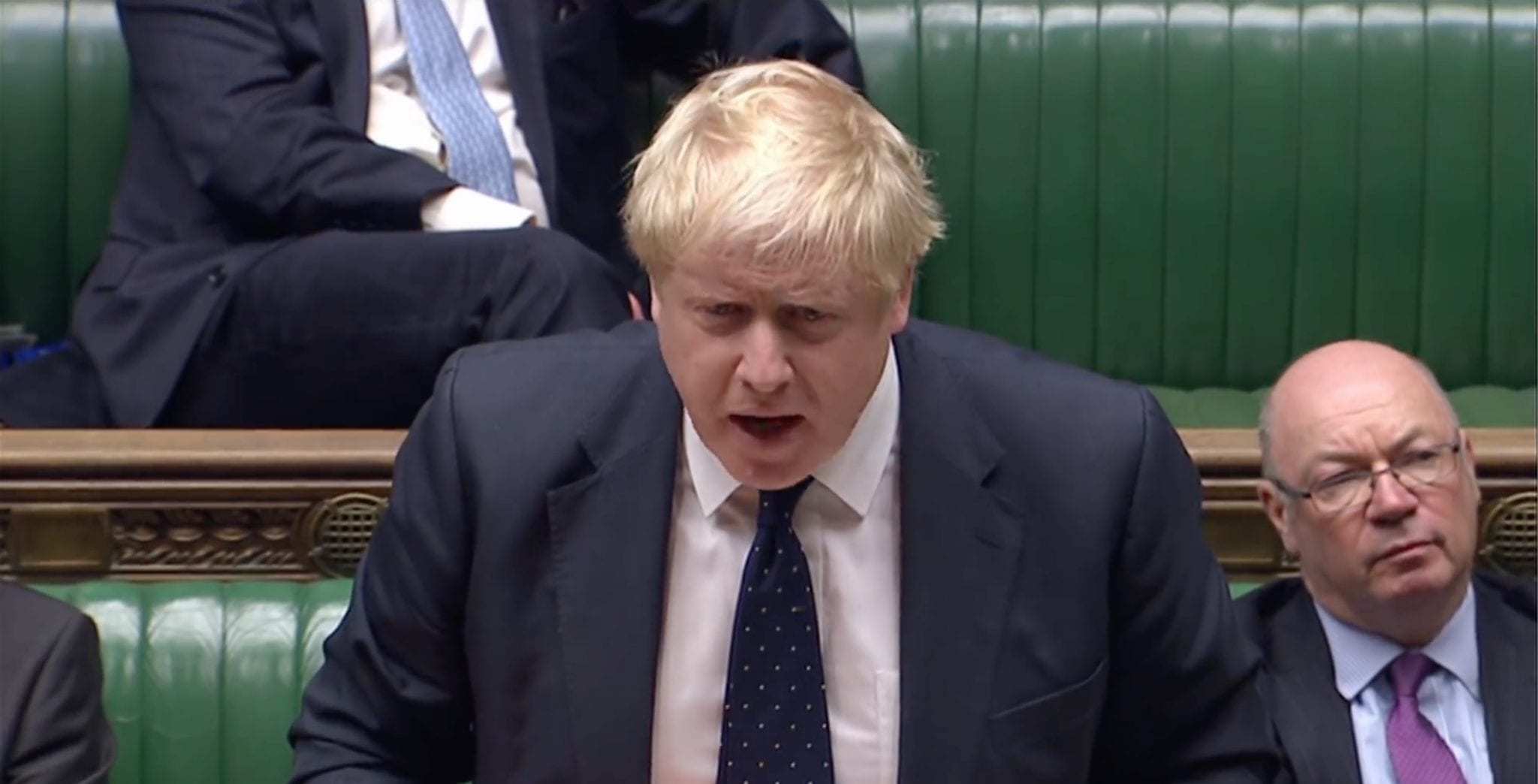 The Boris Johnson Burka row has raged much longer than it should have. It is almost becoming boring.

Yes, I’m getting tired of winning.

But like any semi-competent writer, I can still squeeze the last drops of juice from this festering orange of pseudo-shock and intimidatory outrage.

One of the recent protests against Boris — in his constituency and my hometown of Uxbridge — saw a Muslim fundamentalist, niqab-clad, also sporting a sign which read “#MyDressMyChoice.”

The hashtag was popularized in 2014 after a number of Kenyan women were brutally beaten for daring to wear short skirts.

The irony of this caption being co-opted by the adherents of the antithetical position to the victims of abuse has clearly been lost on Britain’s Muslim fundamentalist community, who have engaged in a coordinated campaign of both threats, victimhood, outrage, blasphemy enforcement, and political leverage wielding.

The same gaslighting approach as those predominantly male abusers of Kenyan women, and of other women in Iran, to give another example, who cruise around in public looking for other women to shame and attack for their failure to cover up.

In truth, the reason Britain’s Boris burka saga has continued on so long (apart from the alliterative possibilities that mean tabloid editors don’t want it to die) is that everyone — right, left, center, up, down, and all over the political spectrum — realizes this is a litmus test for Britain.

Will the Nation Bow (Further) to the Pressure of an Effectively Foreign Force?

Before I am censured for calling British Muslims “foreign,” take note of two things.

The first is that I am calling the burka, niqab, chador, etc. “foreign,” not the people wearing them. Though some indeed may be.

The burka is no more part of British culture — which is to say our heritage and tradition — than any of the above. They’re all foreign. It pains me that because of the shifting of the Overton window over the past decade, I need to waste words to clarify such an obvious point.

Foreign influences in this regard — such as those pertaining to Sharia (Islamic law) and pro-Islamic caliphate organizations — have in recent history reached the very heart of British government.

I’m not talking about our Prime Minister Theresa May, and her repeated refusals to speak for England, as Leo Amery MP once demanded of Labour opposition spokesman Arthur Greenwood in the face of Chamberlain’s appeasement of Hitler. I’m talking about the former Chairman of the Conservative Party, Sayeeda Warsi, who has led the charge against Boris, whipping up the fear of “Islamophobia” along the way.

Warsi — or “Baroness Token” as she came to be known — was David Cameron’s failed experiment at multiculturalizing the Tory Party and the British government.

She wasn’t promoted on merit. She was promoted because she was from the densely Muslim populated area of Dewsbury. Where, rumor has it, she married and divorced with the assistance of a Sharia council.

While she’s never commented openly on the specifics, she has defended the idea of arranged marriages, stating:

Arranged marriages have a good statistical chance, because the process is a lot more analytical. There must be a lot of mothers who wish their daughters would be a bit more analytical about whom they brought home.

She’s often tried to straddle Britain’s fractured Muslim communities and the Conservative Party. Usually falling into trouble with one or the other along the way.

What Was It Mrs. Thatcher Said About Standing in the Middle of the Road?

Lady Warsi has been pelted with eggs and called “Cameron’s bitch” by her fellow Muslims.

She’s been subjected to skepticism and scrutiny from the political right for her religious affiliations and the political ties that shoot off from them.

And she’s been repeatedly attacked by apostates and secularists too.

Why does she matter, though? Apart from being one of Boris’s weaker detractors in this very public row over a throw-away joke?

I raise her because Warsi represents the philosophical duality that has tried and repeatedly failed to exist in Britain, today. When I say “failed”, I mean the public will not countenance it, and many British Muslims don’t want part of one or the other: Islam or Britishness.

And no matter how much London wants to be a multicultural s—thole, the rest of the nation doesn’t.

Warsi’s attempts to force an arranged political and cultural marriage between Islam and Britain has been rejected and will be ad infinitum.

Her bolshiness over such matters will push more people into the arms of the political right, and Boris Johnson — no strange to canny calculations — knows that.

He’s also sticking to his classical liberal guns by stating he wouldn’t call, as I would, for a Burka ban.

But he is paying homage to those who would support such a measure by acknowledging that he understands the foreignness of the garments, and allowing the red-green alliance to tie itself up in knots attacking him.

As is increasingly predictable, the Conservative Party and Theresa May find themselves aligned with the socialists and the Islamophobia victimhood industry.

There’s also almost no data on how many women in the United Kingdom wear one of the “letterbox” dresses, or parade around like bank robbers.

The iNews website — a leftist hysteria blog — cited an article from 2017 that doesn’t give much insight besides the fact that there aren’t many women in France, where the burka is banned, who wear it.

It may well be only tens of thousands of British, Muslim women, but anecdotally at least it seems that number is growing, and the reach of the burka is spreading beyond London’s Edgware Road or Tower Hamlets or Bradford.

The mainstream media is now on the hunt for “Islamophobia” stories, often publishing the entirely reasonable reactions of ordinary Britons (and immigrants) to their covered counterparts as examples of an outrageous “racism” rife across the country.

Expect, by the way, the usual “Spike in Reported Hate Crime” stories to emerge next week. This time appended with “…after Boris Lashes Out Against Muslims.”

The latest example is that of a Bristol bus driver who felt uneasy carrying burka-clad women around, stating: “this world is dangerous. If you don’t see somebody’s face, that’s not good. In this time we live…”

Surely enough, he was set upon by an angry mob of screeching Islamic harridans who declared: “She doesn’t want you to see her face, that’s her choice,” and who gleefully recorded themselves bragging: “I’m recording an incident of racism to report later on. I have the right to do that.”

This is the very definition of what Enoch Powell’s unnamed constituent meant by the “whip hand” back in 1968 — after the passing of the 1965 Race Relations Act — about which I go into (excruciating) detail in my recent book Enoch Was Right: Rivers of Blood 50 Years On.

The bus driver in the video was clearly an immigrant, too. Never mind that when accusing him of “racism” for wanting to see someone’s face, eh?

The media’s newfound witch hunt of us pesky people who want to see someone’s expressions, reactions, and mannerisms when in public may surely lead to people like him losing their jobs.

It doesn’t take many women wearing the burka in Britain, therefore, to open and sustain a major public rift which has come to define the nation abroad.

Britain’s radical Islam problem is an embarrassing discussion point in many dining rooms, pubs, bars, and academic institutions around the Western world.

Far from being an exemplar on the subject of immigration, Britain perhaps leads the league in “how not to do it.”

The public, as opposed to our politicians, are set broadly against the medieval Bedouin tarp advocates, and have been for over a decade according to polling.

This means that yes, perhaps the Brexit majority, or broader silent majority of conservatives in the United Kingdom are in fact responsible for a hardening against foreign elements among us: a claim often made by pro-EU campaigners and hysteria whipper uppers.

The reason to be quite unhysterical over such matters is that it actually means the country is uniting once again around a philosophical core of beliefs; civilizational values, rather than becoming “more divided than ever” as so many EU Remainers insist.

It makes sense that the Guardian, Hope Not Hate, and others are so terribly fearful of a 7-minute radio appearance by me. A throwaway joke by Boris. And by a working class guy from Luton who recently won a major legal appeal against the government.

I think they’re scared of us.

I think they’re scared of Britain getting its groove back.

And you know what? I think they’re right to be.

Raheem Kassam is a Shillman fellow at the Middle East Forum, a senior writing fellow at the Gatestone Institute, and a Lincoln Fellow at the Claremont Institute. He is the author of two bestselling books on radical Islam, ghettoization, and immigration.