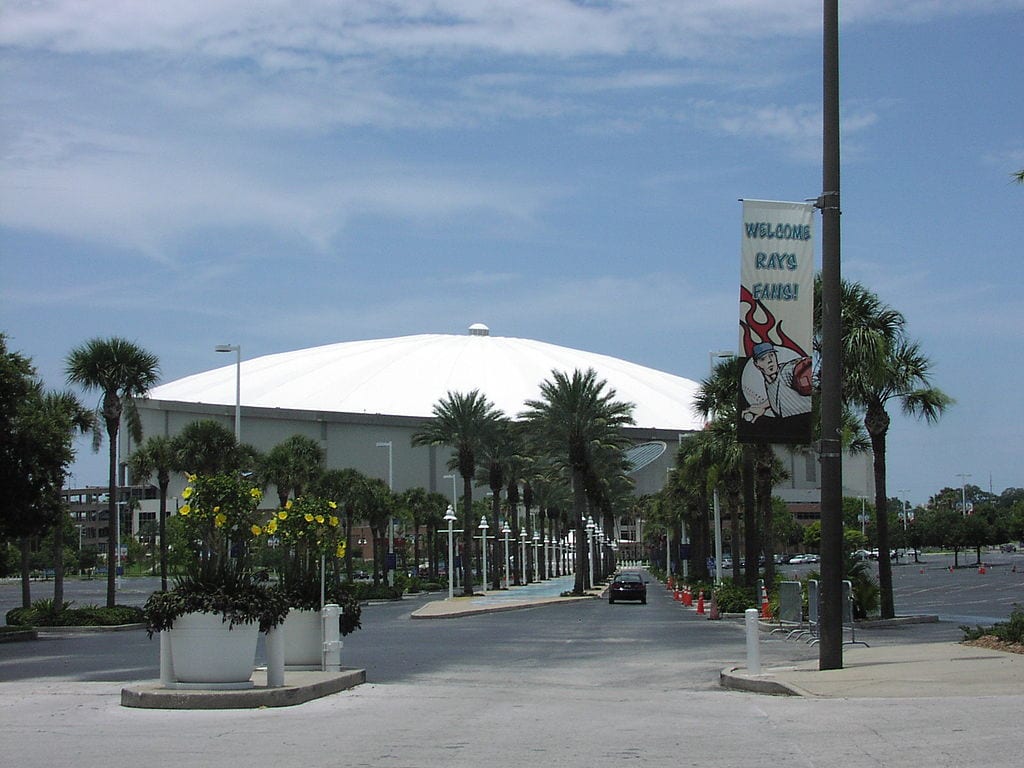 The Florida branch of Americans for Prosperity has gotten into the controversy over the new ball yard that the Tampa Bay Rays want built for them in Tampa so that they can desert St. Petersburg, Tropicana Field, and the remainder of the ball-yard lease team officials signed (without a gun to their heads) when they came to town.

AFP-Florida, a conservative advocacy group, is running a 30-second video ad on social media feeds opposing the larcenous practice of governments funding ball-yards for private entities, in all cases very plush Major League private entities that should finance their own facilities.

The ad and the adjoining press release from AFP-Florida make the unassailable points that sports franchise owners have fleeced taxpayers of billions of dollars over the years for ball yards that have benefited wealthy team owners and wealthy athletes but have not benefited said taxpayers who often can’t even afford to purchase a ticket to watch a game in the sports palaces they have been taxed to build. The group has run similar campaigns in other cities where franchise owners have attempted to attach their sucker-like mouths to the local public treasury.

“When it comes to the big game of corporate welfare, the taxpayers are always the losers,” the ad states, an assertion that is unanswerable. At least there’s no honest answer to this. If the outlandish claims for the benefits to communities of Major League ball-yards were true, the garden spot of the nation would be the South Bronx, which surrounds Yankee Stadium, the jewel in the crown of Major League ball-yards.

One may be tempted to think that AFP is exaggerating when it claims “billions” have been exacted from taxpayers’ scalps for stadiums, that is until one reviews the AFP chart, included in the ad, which they claim shows the amounts of taxpayer tariffs for new NFL stadiums just in the last decade. They include: San Francisco, $1.3B; New York, $1.6B; Minnesota, $1.1B; Indianapolis, $720M; Dallas, $1.15B; and Atlanta, $1.5B.

Major League Baseball’s only defense as a public freeloader is that they are somewhat less disastrous than their NFL brethren. John Q. has been on the hooks for baseball stadiums to the tune of: Milwaukee, $820M; San Diego, $223M; Philadelphia, $229M; Arlington, Texas, $800M; and Atlanta, $392M.

As the late Senate minority leader Everett Dirksen famously said (if you ever heard his voice, you’d know why they called him The Wizard of Ooze), “A billion here and a billion there, and pretty soon you’re talking about real money.”

It’s not at all clear that Rays owners will get their field of dreams in Tampa. The estimated cost of the new yard is between $500M and 650M. But we’ve seen this movie before, haven’t we? Final costs of new stadiums almost always exceed the original estimates, often by a lot. Local officials have bobbed and weaved around the question of how the proposed new yard is to be financed, conceding that local taxpayers are not in the mood to pony up a packet for yet another sports palace, but not suggesting how it can be done without it. The Rays have offered to contribute an amount roughly equal to what we might find by searching Donald Trump’s sport coat pockets.

Tampa Mayor Bob Buckhorn is a nice man and normally not too daft or devious for a Democrat. He’s usually coherent (though not always convincing). But not here, where he essentially says he feels very strongly both ways. He and Hillsborough County Commissioner Ken Hagen, a long-time horse-holder for the pro-stadium crowd, have insisted that a way can be found to build the stadium without tapping taxpayers. I’ve assigned a large team of canvassers to swarm shopping centers, saloons, and other places where large numbers of locals congregate. They’re commissioned to engage in a continuous and exhaustive search to locate someone who believes this. So far the team has nothing to report.