In Print Spring 2022 Football,NFL,Sports,Super Bowl,Tom Brady Brady Is Back - The American Spectator | USA News and Politics
Menu
In Print Spring 2022
Brady Is Back
The GOAT retired — and then unretired — at the top of his game.
by W. James Antle III
Tom Brady at Raymond James Stadium, Tampa, Florida, December 12, 2021 (Steve Jacobson/It’s Sports Magazine/Shutterstock) 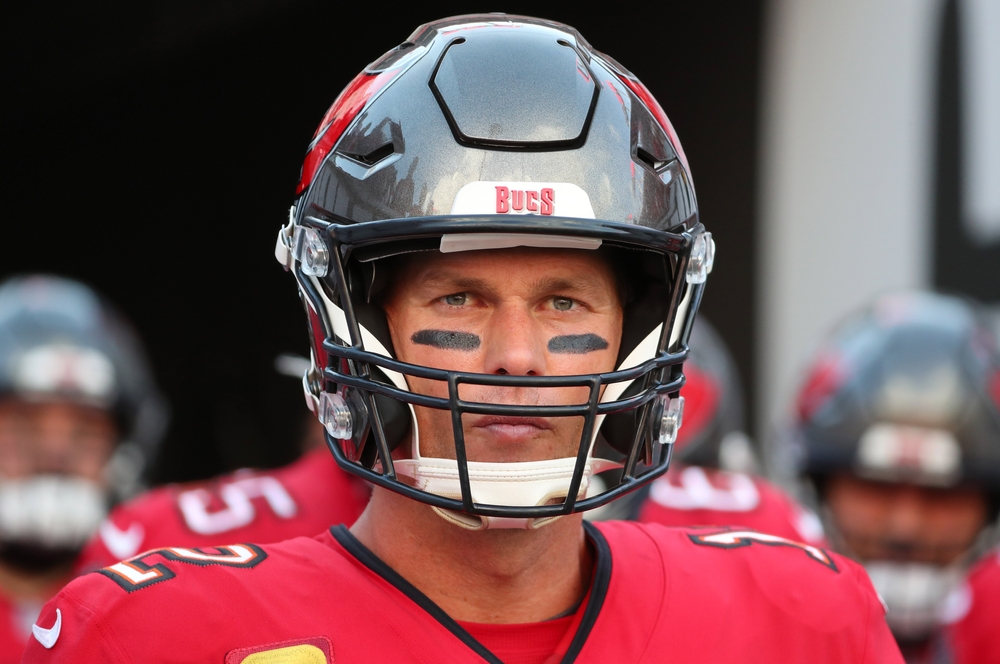 And on the fortieth day, Tom Brady unretired. In an NFL off-season that has been defined by change, the legendary quarterback’s announcement that he was going to return for his twenty-third season after all might have been the most momentous. But coming back does give Father Time one more shot to beat Brady.

Trailing 27-13 in the fourth quarter of what was already rumored to be the final game of his career, Brady stepped up in the pocket. On just the third play of the drive, the Tampa Bay Buccaneers signal-caller connected on a beautiful fifty-five-yard pass to wide receiver Mike Evans for a touchdown. It was the beginning of a frenetic comeback attempt that fell short when a defensive letdown prevented the Bucs from forcing overtime.

A side-by-side comparison of Brady’s throw to the 2007 touchdown pass that gave the New England Patriots an undefeated regular season and this late period touchdown strike was later posted on social media. At age forty-four, Brady’s movement, mechanics, arm strength, and ball placement were almost identical to how he had looked in his prime over fourteen years earlier, despite his being pummeled by the fearsome Los Angeles Rams’ pass rush all day. 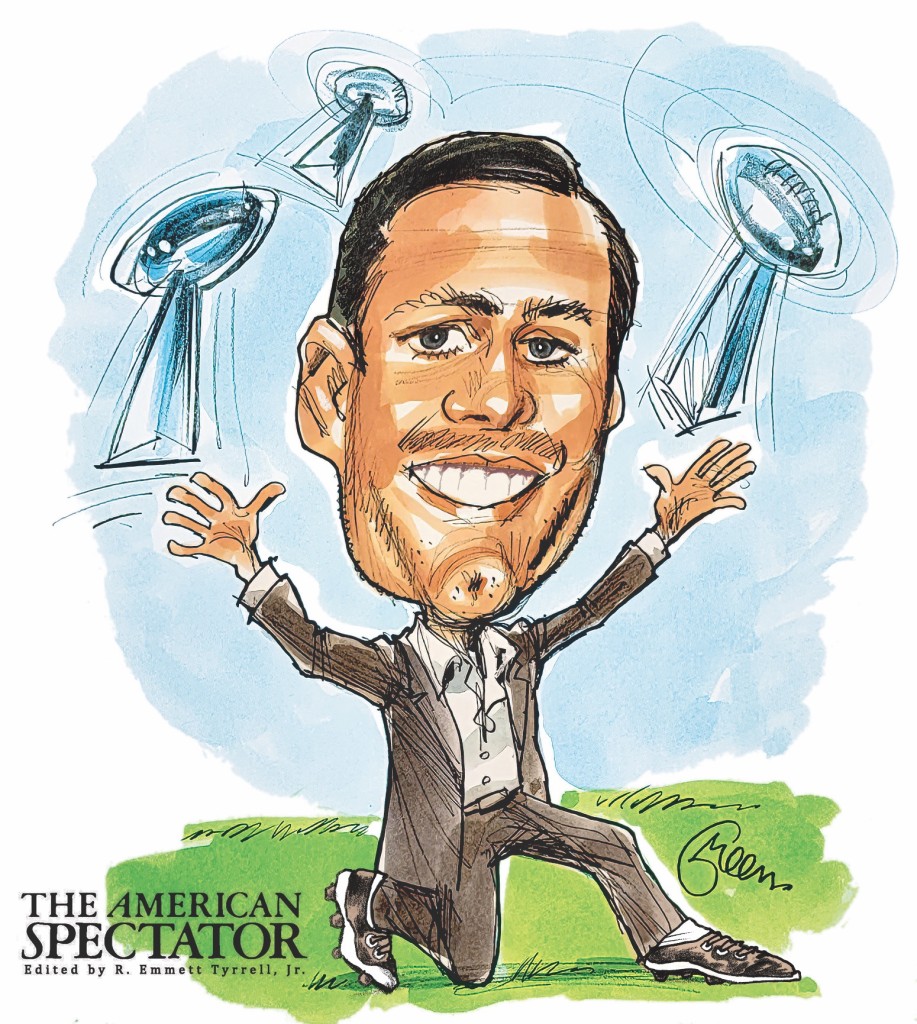 “Brady made it feel like he would try to achieve everything that was conceivably possible,” wrote Rodger Sherman in The Ringer after the short-lived retirement announcement. “In the end, he settled for simply achieving more than anybody else in football history ever has.”

Had that remained Brady’s final game, it would have meant something without precedent in team sports. Football fans would have never seen Tom Brady not look like Tom Brady, even as he played well into his forties. In fact, the least like himself he ever looked was in the beginning of his career, not at the end — so far.

Drew Brees saw his arm strength decline. Ben Roethlisberger at thirty-nine hobbled around on the field like a much older man. Peyton Manning was a shell of his former self at the end, even if he did go out on the high note of a Super Bowl win. In 2021, Brady led the league in passing yards, completions, attempts, passing first downs, touchdown passes, Pro Football Focus grade, and Defense-adjusted Yards Above Replacement, orchestrating a high-powered offense in early middle age. A powerful case could be made that he should have once again been league MVP.

Brady is among a handful of quarterbacks to have beaten every team in the NFL. He defeated critics who attributed his success to playing in a certain “system” or the air pressure in footballs. In partnership with legendary head coach Bill Belichick, he helped lift a New England sports franchise that had too often been a league bottom dweller into a perennial contender. Then, without Belichick’s watchful eye, he went down to Tampa and did it again. He defied expectations for professional athletes as they age.

The system quarterback argument against Brady’s greatness was always the silliest. Not only did the offenses in which Brady played consistently morph based on the personnel — two or three tight-end sets, run-heavy formations, the spread offense that lit the NFL on fire in 2007 — but it’s a system in which only Brady and his backups thrived. No Belichick deputy has ever been able to replicate it. Two number one draft picks who bookended Brady, Drew Bledsoe and Cam Newton, failed in this system. It took a decade and a half for it to produce a second bona fide NFL starter in Jimmy Garoppolo, who seems likely to be dislodged from his position next season. You can make a better case that Joe Montana was a product of Bill Walsh’s system.

Over the past decade, a virtual cottage industry of Brady doubters has sprung up trying to either explain away the quarterback’s success or predict its imminent end as he fell off the “cliff.” This hall of shame includes Max Kellerman, Rob Parker, and a slew of far more obscure figures seeking to rile up talk radio listeners or generate cheap clicks. By the end, Brady had shut them all up.

In an era of parity and participation trophies, envy and mediocrity, many football fans hated Brady for his sustained excellence, often at their preferred teams’ expense, and chiseled good looks. But somewhere in the Tampa Bay heat, even this attitude largely mellowed. First grudgingly and then admiringly, Brady’s skeptics had to admit they were watching something they were unlikely ever to see again.

While other athletes faded over time, Brady’s greatness became almost self-fulfilling as he aged. In seemingly impossible situations, such as being down 28-3 late in the Super Bowl, Brady could will his team to win. When he stepped into the huddle and promised that victory was still possible, his younger teammates, who had grown up watching him achieve the improbable their whole lives, believed him.

Even some of Brady’s uncharacteristic defeats show what a competitor he was. In the 2007 Super Bowl defeat that spoiled a perfect season, Brady lofted a seventy-yard pass toward Randy Moss in the final moments of the game that if caught — and it was catchable — would have set them up perfectly to go 19-0. Or the 2016 AFC Championship Game against the Peyton Manning–led Denver Broncos, in which Brady took a pounding from pass rushers. As the announcers were ready to pack up and go home, Brady uncorked an excellent forty-yard pass to tight end Rob Gronkowski on fourth down, followed by a touchdown that came within a two-point conversion of overtime.

Brady is first in Super Bowl titles, career touchdown passes, passing yards, and a whole host of individual accolades that may never be topped. Now he has a chance to add even more. What about an eighth Super Bowl ring, tying Eli Manning’s number of career playoff wins? That would surely be a talking point to (partially) make up for those losses to the Giants.

In playing this upcoming twenty-third season at age forty-five, Brady is once again betting on himself. He can enhance his legacy or come to a more familiar end. The other Manning brother threw for thirty-nine touchdowns in his penultimate season. This plummeted to just nine his last year in the league. Peyton’s passing yards similarly collapsed from 4,727 yards in 2014 to 2,249 in 2015. Peyton went out a Super Bowl champion, to be sure. He also tossed nearly twice as many interceptions as touchdowns that final season.

Why did Brady retire in the first place? There have been rumors of a move to the Miami Dolphins, in a front-office role if not as a player, that was blown up by fired coach Brian Flores’ racial discrimination suit against the NFL. There may have been unrealized hopes of joining his boyhood team, the San Francisco 49ers, but the logistics proved too onerous. Perhaps there was a power move in Tampa Bay, whose fortunes depend heavily on his return.

I would like to think the Buccaneers, who seemed destined to be a two-year wonder, made the case to Brady that they could provide him with a championship-worthy supporting cast. With the return of Chris Godwin and the signing of Russell Gage, their coach (and general manager) would not turn into a pumpkin. Right on cue, eighteen days after Brady came out of retirement, head coach Bruce Arians — with whom there were reports of tensions last season — entered it, stepping into a front-office role with the team.

That might have been all it took to get Brady to suit up and to seize his favorite Super Bowl ring: the next one.