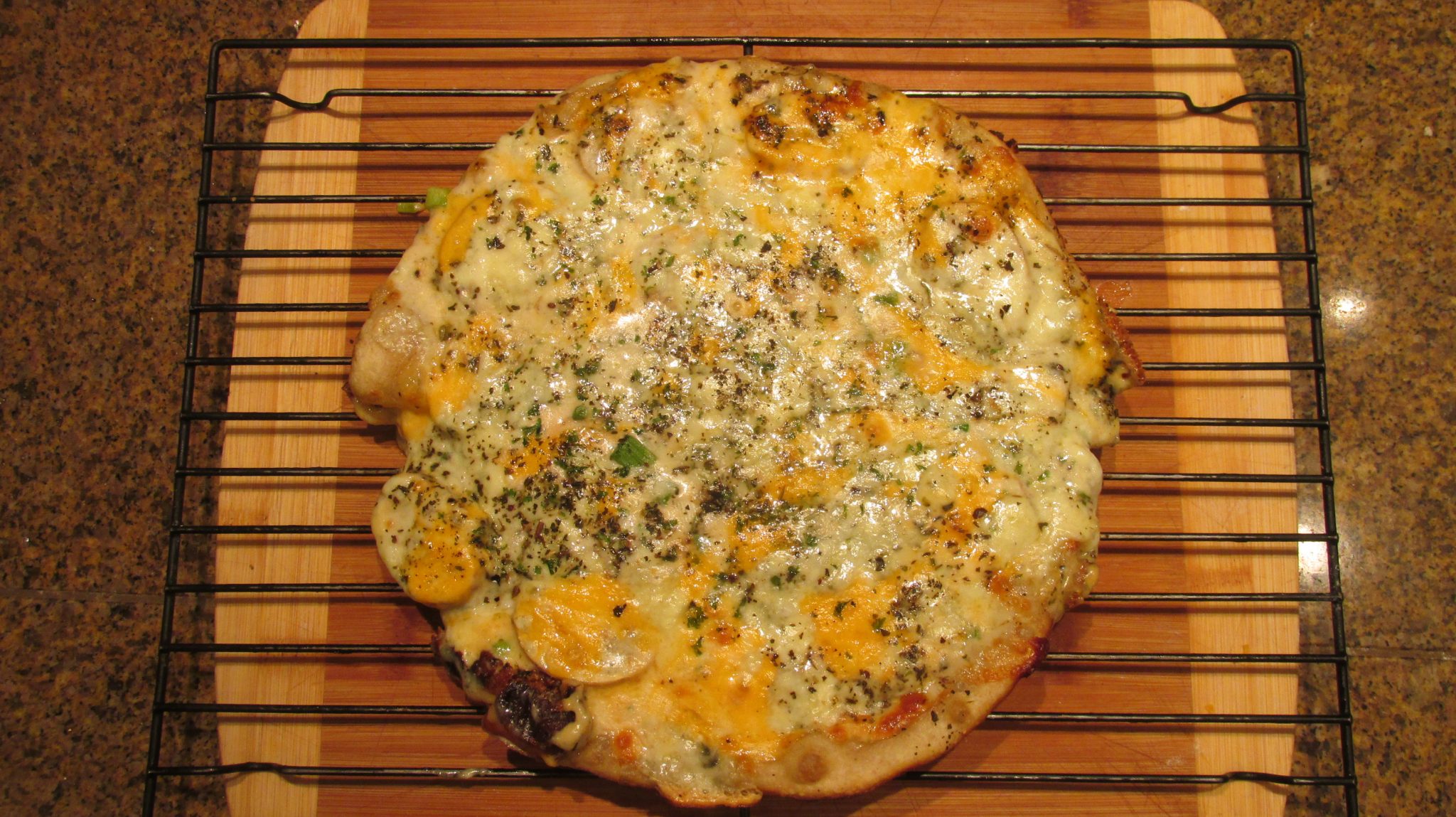 COVID quarantines and lockdowns kick-started my inner chef, and, since I only went out for groceries when I really needed to, put me on intimate terms with the contents of my pantry. While still in Phase One, I had a serious hankering for pizza, and deliveries were out. But when my feet walked me into the pantry for the third time looking for tomato sauce and tomato puree, I had to admit that I’d run out of both. But I did have a couple of jars of Alfredo sauce. I got the brilliant idea to invent a white pizza.

Send your food and drink recipe recommendations to editor@spectator.org!

I always have sourdough starter on hand and was well stocked with cheese. My fridge vegetable tray was low — some green onions, a few button mushrooms, and precious little else. I got to work, and by dinner time my sourdough pizza dough hadn’t developed fully but was close enough. I preheated the oven to 500° F, stretched and rolled my dough out, and patted it thin enough to reach up the sides a little in my 10-inch cast-iron skillet. I brushed the dough with olive oil, ladled on some Alfredo sauce, artfully applied sliced mushrooms and chopped green onions, and sprinkled it with cheese — mozzarella, pepper jack, mild white cheddar, and crumbled blue cheese. I sprinkled it with dried basil and dried parsley (I was out of fresh herbs). Now, I know it was a pizza, but I held my hand from using grated Italian hard cheeses like parmesan, pecorino, or romano — I figured that the blue cheese was salty enough (and it turned out that I was right).

I put the pan on the stove, cranked the burner up to high, and cooked it for five minutes, until the edges puffed up and began to char. Then into the hot oven for five minutes more. Bubbly goodness.

I was so pleased with my original creation that I decided to record it for posterity, and just out of curiosity did a quick web search for “white pizza.”

To my astonishment, I found out that “white pizza” was already a thing, and not just a thing, but an ubiquitous thing, with dozens (and dozens) of versions, a wide range of ingredients, and absolutely no shortage of preparation and baking techniques. True, most of the recipes are pretty much white cheese on a pizza crust — most calling for various blends of ricotta, parmesan, pecorino, or mozzarella. Some boast toppings ranging from arugula, pesto, basil, and tomatoes (not really “white” with all those reds and greens) — but then I found it: chicken Alfredo pizza, really close to my invention. True, chicken Alfredo pizza calls for cubes of skinless chicken breast on top of the Alfredo sauce on top of the pizza crust and doesn’t incorporate blue cheese crumble — so it wasn’t my recipe. That’s mainly because I didn’t have chicken at the time and did happen to have blue cheese. But it was close enough to queer my glee at having created an original recipe.

My white (blue) cheese pizza might not be a totally original concept, but it still worked, and was really good — good enough to cook it again for myself and for friends, and good enough to share the recipe with others.

Pizza dough for one pizza
Olive oil
Alfredo sauce
Button mushrooms, sliced thick (I only had three left, but six would have been better)
Green onions, chopped
Mozzarella (fresh would be fancy, but shredded works too)
Thin slices of pepper jack, Colby, and or mild white cheddar to taste
1/2 cup crumbled blue cheese
1 tsp. dried basil, or to taste (I’ve since used fresh)
1 tsp. dried parsley, or to taste (I’ve since used fresh)
Salt and pepper to taste

I used homemade sourdough pizza dough, but any pizza dough should work. Roll, stretch, and pat the dough to fit your cast-iron skillet, working it up a little on the sides. Brush with olive oil, ladle on some Alfredo sauce, and smooth it out with the back of the ladle. Lay on the mushrooms and green onions, mozzarella, pepper jack, and/or mild white cheddar — whatever you prefer — all relatively mild cheeses that count on the blue cheese for sharpness and saltiness. Top with blue cheese. You might feel obliged to grate on some hard Italian cheese as a final touch — after all, it’s a pizza — but again, blue cheese is plenty salty as it is. So, if you insist, consider cutting the blue cheese down to 1/4 cup.