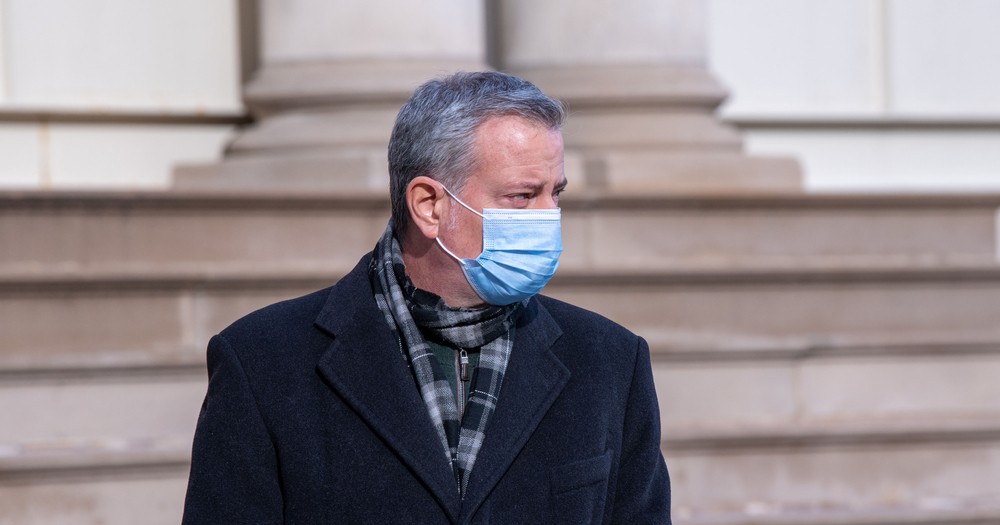 Frank Sinatra may have envisioned waking up in a New York City that made him king of the hill and top of the heap, but those days are long over thanks to Mayor Bill de Blasio’s disregard for public safety, neglect of leadership, and utter incompetence.

In just under eight years, de Blasio has managed to turn the city that never sleeps into the city everyone flees. This once thriving and vibrant metropolis has become a crime- and drug-infested jungle, where pedestrians are randomly punched in the face by the mentally ill, who are free to roam the streets; where subway riders are pushed onto the tracks as they wait for a metro that has likely been transformed into a rolling homeless shelter; and where visitors to Washington Square Park are greeted with drug addicts, people urinating in public, and criminals who terrorize citizens with knives.

After de Blasio employed some of the strictest COVID-19 lockdown measures anywhere in the country, the city’s unemployment rate currently sits at an abysmal 11.4 percent. Due to de Blasio’s mismanagement of the pandemic, about 3.57 million people left New York City last year between Jan. 1 and Dec. 7, resulting in a net loss of 70,000 people and roughly $34 billion in lost income.

It’s no wonder that 72 percent of the 1,000 New York City Democrat voters who were recently polled rated de Blasio’s performance as “fair” or “poor,” while just 26 percent said he was doing a “good” or “excellent” job. It turns out even the liberals in New York City have had enough of de Blasio. When all is said and done, Warren Wilhelm Jr., as he was known at birth, will go down in history as one of the worst mayors that Gotham has ever elected — or perhaps as the worst mayor “in the history of this great country,” as New York Democrat Rep. Max Rose said of de Blasio last year.

De Blasio, who was first elected mayor in 2013 and inherited a city with historic lows in crime, garnered 73 percent of the vote in a weak and sparse field, in which only 7 percent of the city’s registered voters participated. Even after his blatant disregard for the position became evident, he was reelected in 2017 with another 66 percent of the vote, with only 8.5 percent of the New York City population actually voting for him. And he will be leaving the city in far worse shape than when he entered office.

One wonders where de Blasio went wrong. Perhaps his troubles began during his college days when he toured the Soviet Union in 1983, or when he took a trip to work alongside the Sandinistas in 1988, or when he later honeymooned in Cuba. Or maybe it was during his first term as mayor, when he marched behind Oscar López Rivera, a convicted terrorist, at the Puerto Rican Day Parade. Perhaps it was one of the numerous times he simply overslept, one of which resulted in him showing up 19 minutes late to a memorial service for the families of the victims of a plane crash that occurred in Queens in 2001.

Maybe it was when he tried eliminating the horse-drawn carriages in Central Park, or when he tried to limit the number of Uber cars in the city in favor of the yellow-cab industry, which had donated roughly $550,000 to his mayoral campaign. Maybe it was his insistence on channeling his inner Bernie Sanders in railing against the supposed evils of private property, luxury housing, and income inequality, or uttering stupid remarks such as, “I think there’s a socialistic impulse, which I hear every day, in every kind of community, that they would like things to be planned in accordance to their needs. And I would, too.”

Maybe it was the time that members of the NYPD turned their backs on de Blasio at a funeral for two murdered officers, and Patrick Lynch, the president of the city’s biggest police union, openly blamed the mayor for the tragedy: “There’s blood on many hands tonight … That blood on the hands starts at the steps of City Hall in the office of the mayor.”

This statement came after de Blasio had said about his biracial son, “I have had to talk to Dante for years about the dangers that he may face,” de Blasio said. “A good young man, law-abiding young man, who would never think to do anything wrong. And yet, because of a history that still hangs over us, the dangers he may face, we’ve had to literally train him — as families have all over this city for decades — in how to take special care in any encounter he has with the police officers who are there to protect him.”

Maybe it all went wrong when de Blasio decided to run for president in 2020 and spent just seven hours at City Hall during the first month of his campaign before ultimately dropping out after only 15 people attended a campaign event in Iowa and his polling hovered around 0 percent. Yet even after ending his ill-advised presidential bid, de Blasio still had little interest in repairing his city.

As of May 2, 463 New Yorkers have been victims of shootings, a huge spike from 259 in the same time period of 2020. But de Blasio, who essentially ended stop and frisk and closed Rikers Island, seems content to allow violent criminals to roam the streets while he finishes out his term. Of course, de Blasio does not consider himself responsible for the rising crime rate but has instead blamed the pandemic, high unemployment, the weather, and what he called an unfair court system.

And there’s more: de Blasio has allowed the subways to become overrun with the homeless, as train cars are regularly filled with urine, feces, vomit, blood, and more, according to internal MTA documents. In the last month alone, there were 132 reported incidents of soiled or unusable train car interiors compared to 118 reports of dirtied train cars in May 2020. Perhaps the homeless have decided to seek refuge below ground after de Blasio announced last week that he will be moving roughly 8,000 homeless people out of the more than 60 hotels for which New York City taxpayers were on the hook over the past year, at a cost of nearly $300 million, or $120 per night.

Not surprisingly, public safety has become the top concern for New York City residents. With the New York City mayoral primary occurring on Tuesday, Eric Adams, who has made crime his top issue, is currently leading in the polls, at 28 percent, while Andrew Yang is not far behind at 20 percent. Still, other candidates who are very much alive in the race are doubling down on de Blasio’s radical agenda. Kathryn Garcia, who is currently polling third at 15 percent, wants the city to be a “true sanctuary city” for illegal immigrants, and Maya Wiley, who was endorsed by AOC, wants to cut $1 billion in funding from the police and establish a civilian police commissioner.

Regardless of the outcome of this race, the next mayor of New York City will have their work cut out for them, thanks to Bill de Blasio’s negligence and desecration of the city. Perhaps one day, it will reclaim its place as king of the hill and top of the heap.