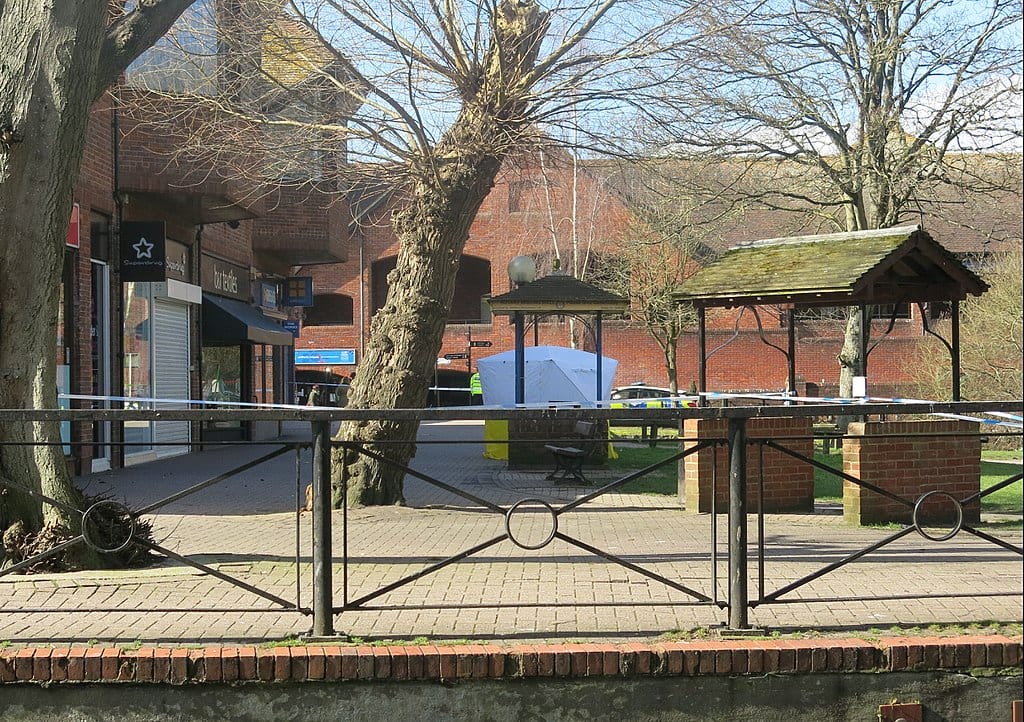 Just came across an intriguing theory about Sergei Skripal, the former Soviet/Russian military intelligence agent who spied for Britain, and, along with his daughter Yulia, was nearly killed this spring by a dose of the nerve agent Novichok in the town of Salisbury, England, where they live.

In a March 21 interview on the John Batchelor Show, Gregory R. Copley, editor and publisher of Defense & Foreign Affairs, posited that Sergei Skripal is the unnamed Russian intelligence source in the Steele dossier.

Copley further explained (or tried to explain) to Batchelor (who kept cutting him off): “The people who wished to see Skripal become quiet were people in Washington, the Democratic National Committee, the Clinton campaign, and people around Christopher Steele himself. I’m not saying necessarily that MI6 or the British government had a witting hand in it, but there are too many people who had an axe to grind to make sure that Skripal did not —”

Did not… did not what? Batchelor steps on the end of Copley’s sentence to interject a question about whether the Novichok attack on the Skripals could have been a “gangland” hit.

What Copley surely meant was to say was — to make sure Skripal did not “talk.”

Copley had already explained that in Skripal’s UK “retirement,” he did plenty of freelance work, providing researchers for a price with that perfect shot of authentic, but also custom-made, “Russian intelligence.”

Copley: “He would write whatever people wanted. He would say, ‘What are you trying to achieve, let me help you,’ and he would do that. And he was apparently prepared to, if you like, to fold under pressure and admit that he had done that, and admit that what he had written about Trump in that dossier was pure fiction, written simply to provide his client with —”

Batchelor steps on Copley again, this time to put in a question about legality. “… there’s nothing illegal about this, correct, Gregory?”

Copley: “Not necessarily, until you get to the part where this was not just providing intelligence services to the Clinton campaign; it was providing a document for use in political warfare operations to influence an election. There, he was basically fabricating material purporting for it to be intelligence —”

Batchelor steps on him again! He asks something about whether MI6 knew Steele was working with Skripal — a question that just might have been able to wait three more seconds.

Even so, Copley’s assessment, which he said he had based on “conversations we’ve had with people familiar with” Skripal, came through loud and clear: In Skripal’s pseudo-country-gentleman retirement, the ex-GRU-MI6 double agent was selling custom-made “Russian intelligence”; he had fabricated “material” that went into the Steele dossier; and he was prepared to say so. By Copley’s logic, this meant that Skripal’s enemies were also Trump’s enemies: “people in Washington, the Democratic National Committee, the Clinton campaign, and people around Christopher Steele himself,” along with their MI6 and British government allies.

Is this correct? I have no idea. It’s quite fascinating, however, as is the British government reaction to certain aspects of it, as seen below.

Copley: “Bear in mind that large elements of the British intelligence community had assumed that Hillary Clinton was going to win the election; they had assumed that it was safe to work with the Obama administration during the eight years to help surveil US nationals, using GCHQ, the British electronic surveillance agency, to surveil US internal phone calls. The NSA is not allowed to do it, so they asked GCHQ to do it —”

Batchelor cuts in. “Right. Right. That’s standard, that’s standard isn’t Gregory? That was in place during the first Cold War.”

Copley: “It was, but it got a little fast and loose during the Obama administration when there was an increased level of surveillance of US citizens and telephone calls coming out of the US. Bear in mind we’ve see a lot of those reports being used against the Trump people by, saying that their calls were surveilled and [unintelligible] evidence for the FBI —” Yup, enter interviewer.

Since the spring, the Skripal poisoning has just sort of been sitting there, like so much Putin-bait, without any discernible context amid many unanswered questions and few, extremely non-satisfactory answers. After listening to the Copley interview, I began to understand part of the reason, at least, that there has been so little light shed on this gruesome incident.

After the poisoning, it turns out that the British government issued two related “D-notices” on the story — a big, fat chill on British press coverage. What seems to have been uppermost in these censorship “requests” was to ensure that the British press protected the MI-6 connection to Sergei, which is interesting all by itself. Such protection would seem to include the name of the retired MI-6 agent who recruited Skripal, first discussed here. As has been reported outside of Britain, that retired MI6 agent’s name is Pablo Miller. It has also been reported that Miller now works with another retired MI-6 agent. His name is Christopher Steele.

Some pretty big dots. Do they connect?

Politely, the Telegraph nonetheless reported on March 7 on a security consultant, presumably Miller, and his connections to Skripal and Steele both.

A security consultant [Pablo Miller] who has worked for the company that compiled the controversial dossier on Donald Trump was close to the Russian double agent poisoned last weekend, it has been claimed.

The consultant, who [sic] The Telegraph is declining to identify, lived close to Col Skripal and is understood to have known him for some time.

The Telegraph understands that Col Skripal moved to Salisbury in 2010 in a spy swap and became close to a security consultant employed by Christopher Steele, who compiled the Trump dossier.

The British security consultant, according to a LinkedIn social network account that was removed from the internet in the past few days, is also based in Salisbury.

On the same LinkedIn account, the man listed consultancy work with Orbis Business Intelligence, according to reports.

“The man” lives in Salisbury; he’s close to Skripal; he works with Steele. Did this breaking news start a stampede? Hardly. British press reaction was, in the main, to get out there and tamp the Telegraph story down.

The Guardian‘s Luke Harding also tweeted to warn all off the story:

The @Telegraph story claiming a link between Sergei #Skripal and Christopher Steele’s company Orbis is wrong, I understand. Skripal had nothing to do with Trump dossier. Nor did unnamed “security consultant” ever work for Orbis

Maybe that depends on what the meaning of “work” is. Still, isn’t this group-finger-wagging a little weird?

The Financial Times, too, joined in the general hush-hushing:

Sources have also dismissed reports of a link between Mr Skripal and private intelligence groups, including Orbis, the company jointly run by Christopher Steele, the former MI6 spy who compiled the infamous Trump-Russia dossier.

The following may have something to do with the general freeze-out: According to Spinwatch.org‘s report on the Skripal story D-notices, representatives from the Guardian and the BBC sit on what is known as the “Defence and Security Media Advisory (DSMA) Committee,” the officially creepy government-media group that oversees British media censorship.

Whatever it is, it has largely worked. With some notable exceptions, Skripal’s connections to Steele — and thus to the dossier and thus to Trump-Russia and the rest — have remained a non-story, a one-off.

Here’s another journalistic outlier. Also on March 7, the Independent reported on a British Channel 4 interview with Valery Morozov, described as a “former Kremlin official” and “an associate of Mr Skripal after he too was exiled to the UK.”

Morozov made the sensational claim that Sergei Skripal had been in regular contact with the Russian Embassy in London:

He also claimed Mr Skripal was keeping “dangerous” company, which is why he later chose to distance himself.

“Every month [he was] going to the embassy to meet military intelligence officers”, Mr Morozov told Channel 4 News.

“For me being political refugee it is either certain danger or, frankly speaking, I thought that this concept is not very good for me. It can be bring some questions from British officials.”

Now, that’s quite interesting. If Skripal had been in regular contact with Russian military intelligence in London, and was also the “Russian intelligence source” for the Steele dossier, then we have this lovely line connecting many things. But is it true? “The Russian embassy said it was not aware of any meetings,” the Independent reported, not that that means a thing.

Mr Morozov also said he was sure that Russian President Vladimir Putin had nothing to do with the alleged poisoning.

“Putin can’t be behind this. I know how the Kremlin works, I worked there. Who is Skripal? He is nothing for Putin. Putin doesn’t think about him”, he said.

“There is nobody in Kremlin talking about former intelligence officer who is nobody. There is no reason for this. It is more dangerous for them for such things to happen.”

He’s nobody, but he meeting with military intelligence officers? He’s a fabricator behind the Steele dossier, but he traveled around Europe offering “briefings on Russia to foreign intelligence operatives”? It’s all very perplexing. More digging, more reporting, more revelation — a nice, new defector, maybe — are required.

If only somewhere had a free press.