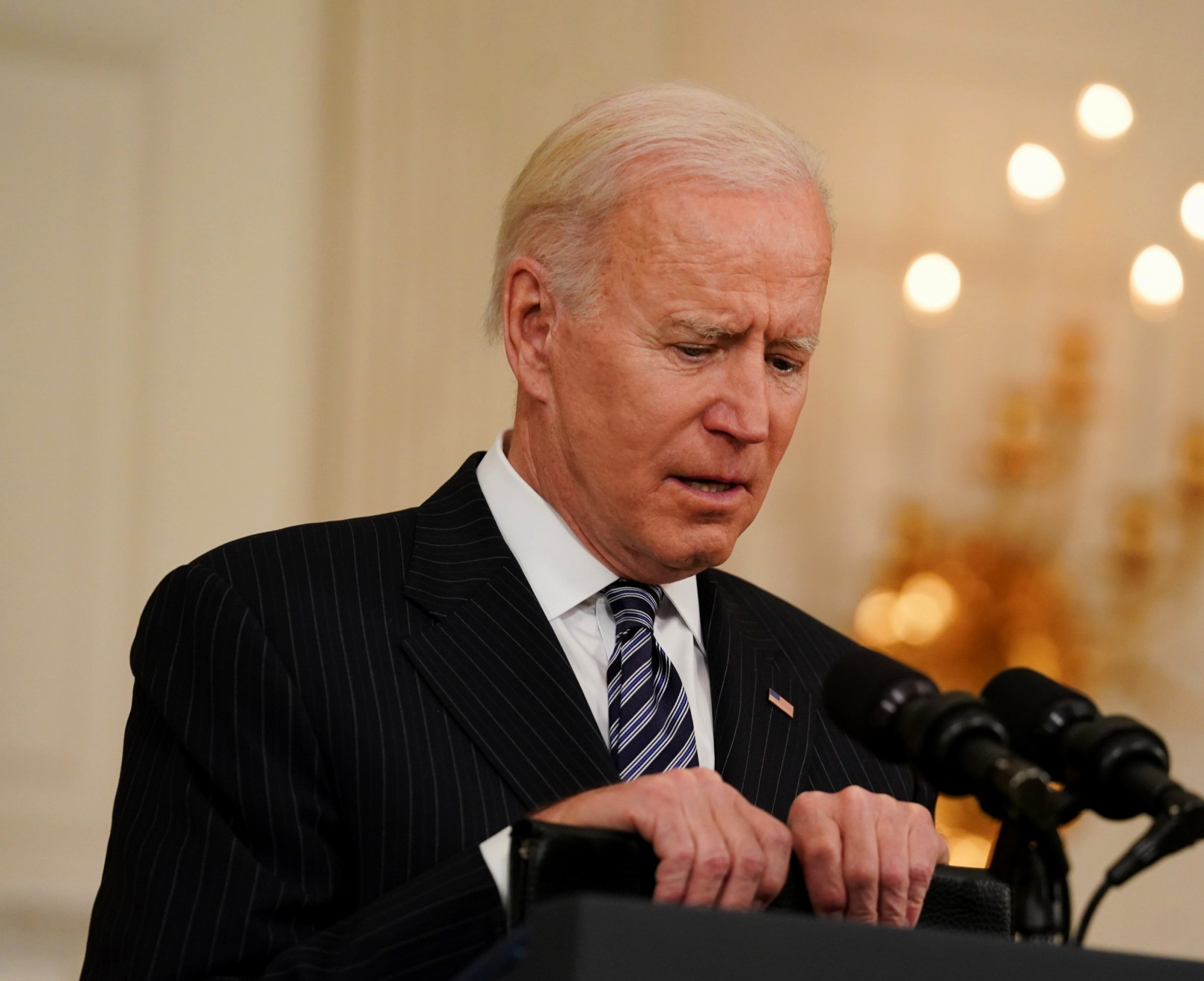 That really is how we ended up with Biden as president. No one sensible conceivably thought that after 50 years of his manifest mediocrity and plentiful plagiarism in public life, this charisma-less character suddenly was going to push Teddy Roosevelt or Thomas Jefferson off Mount Rushmore. Biden inevitably was going to be a candidate, instead, for a Mount Flushmore, perhaps accompanied by a Millard Fillmore, a Franklin Pierce, or a James Buchanan. He had nowhere to lead us because, although even a pencil must be lead, Biden’s presidential candidacy, with Kamala and Nancy in the wings and “The Squad” as backup, was a Peter Bruegel the Elder painting to rival the best “Blind Leading the Blind” paint-by-payola-numbers art works among the coveted Hunter oeuvre of collected high-bribe etch-a-sketch offerings.

Biden so obviously was going to lead us nowhere — not into the Promised Land, not out of Egypt, not even around a desert for 40 years. Like the mediocre colonel who submitted a mediocre application for promotion, his only letter of recommendation could read: “His men would follow him anywhere — but only out of curiosity.”

And yet the Democrats selected him from among their primary bounty of choices, a box of chocolates without fillings in the center … and without chocolate. And now the rest of America is surprised to see the Guernica they got? Why the surprise? How the surprise? It never could have been otherwise. He had no vision for half a century — and yet now he suddenly was going to see a future when he still was promoting 33 rpm vinyl records in 2020? One year ago Politico had him at +16 and Fox News at +20.  Harvard-Harris still had him at +15 in June. It made no sense. And then came Afghanistan — the hammer.

Afghanistan was so dramatic that it pierced through the combined Left Media and Social Media walls protecting Biden from public view. People finally got their glimpse of the man they had seated in the Oval Office. He never has been in positive numbers since. Reuters now has 27 percent satisfied that we are on the right track, with 58 percent persuaded America is adrift in the wrong direction. Even Politico now has that at minus 24. Rasmussen has Biden at minus 13. Politico, Harvard-Harris, and the Economist all have him underwater. He will have better days, but he is sunk. People caught on.

Not only does the emperor have no clothes, but he also is no emperor. The border is in chaos. Race relations are even worse, with Attorney General Merrick Garland now looking to criminalize parental expressions of concern regarding teaching critical race theory to children. Crime is soaring into stratospheres as bail is ended while police are disheartened, resigning, or taking early retirement, and avoiding resolving particularly perilous street incidents when they can look the other way. The pandemic that he said would disappear on his watch has not. The economy that he said he could manage better than Trump has not been. He has not distinguished himself on foreign policy, and the Europeans find themselves ever torn between living under the advantages of a strong American president whom they can hate but who  protects their derrières — or a pretender who leaves them alone and feeling très supérieur but exposed.

So we are back to more countries preaching “Green” with their leaders flying on private jets to promote clean air but buying dirty unregulated energy from Arab sheikdoms while we bottle the clean natural gas and regulated hydrofracture energy reposing under our terrain. We watch the Germans return to belly-aching about the Russians and needing us to protect them from Putin on our dime in NATO — and then building energy pipelines to import oil from Moscow. We waste opportunities offered by the Abraham Accords even as the players themselves meet without us to proceed building new Mideast alliances that bypass us and strategize about Iran options that they know we cannot conceptualize.

This is the mess we did not need to bring upon ourselves, but too many Americans among the 100 percent who comprise the population needed reality hammered into their heads — figuratively! — and, as Winston Churchill may have observed, Americans have an innate ability to make the right choices … but only after they first have opted for each and every other available wrong choice. Need more proof of that? Watch New Yorkers and Californians. Not until they go through a David Dinkins do they select a Rudy Giuliani. Californians needed a Gray Davis to give in to a Republican itch for a while. Now they still need a few more Kamalas and Newsoms until they decide to salvage the glory they once enjoyed under Reagan and George Deukmejian and Pete Wilson.

It seems a part of the American soul. When Americans have it too good, we need to ruin our lives when no one else will step forward to do it for us. If a country dares perpetrate the infamy of a Pearl Harbor, we will obliterate Hiroshima and Nagasaki. Try a 9/11 attack on the World Trade Center, and we literally will feed you to the fishes and will flail at your meaningless country with our military for the next 20 years, even long after it makes no sense. But just leave us alone with the world’s strongest economy, a rebuilt military, unprecedented energy exploration and production, the best racial equality we ever have had with people of all races banging on our doors to please get in, North Korea muted and China on the defensive, a series of vaccines produced at warp speed so fast that it makes the head spin, long-overdue movement to the most secure borders we have had in years, and not a peep from Hamas and Hezbollah for four years — and we will bring in Biden-Harris to reduce us to your size.

It is the way of the new vision: D.I.E. — Diversity, Inclusion, Equity. Instead of equal opportunity, equal results. A vice president of no consequence or attainment whose two resumé qualifiers are that she is female and remains darker skinned even after a three-week visit to Florida. A president who ran on a 50-year record of failure and racial bigotry. Why is anyone surprised that so much of the floor has fallen out, the ceiling has collapsed, and yet that we must pray for Biden’s mental and physical status not to recede further these next three years while a sub-mediocrity lurks in the wings hoping to pounce in at first opportunity?