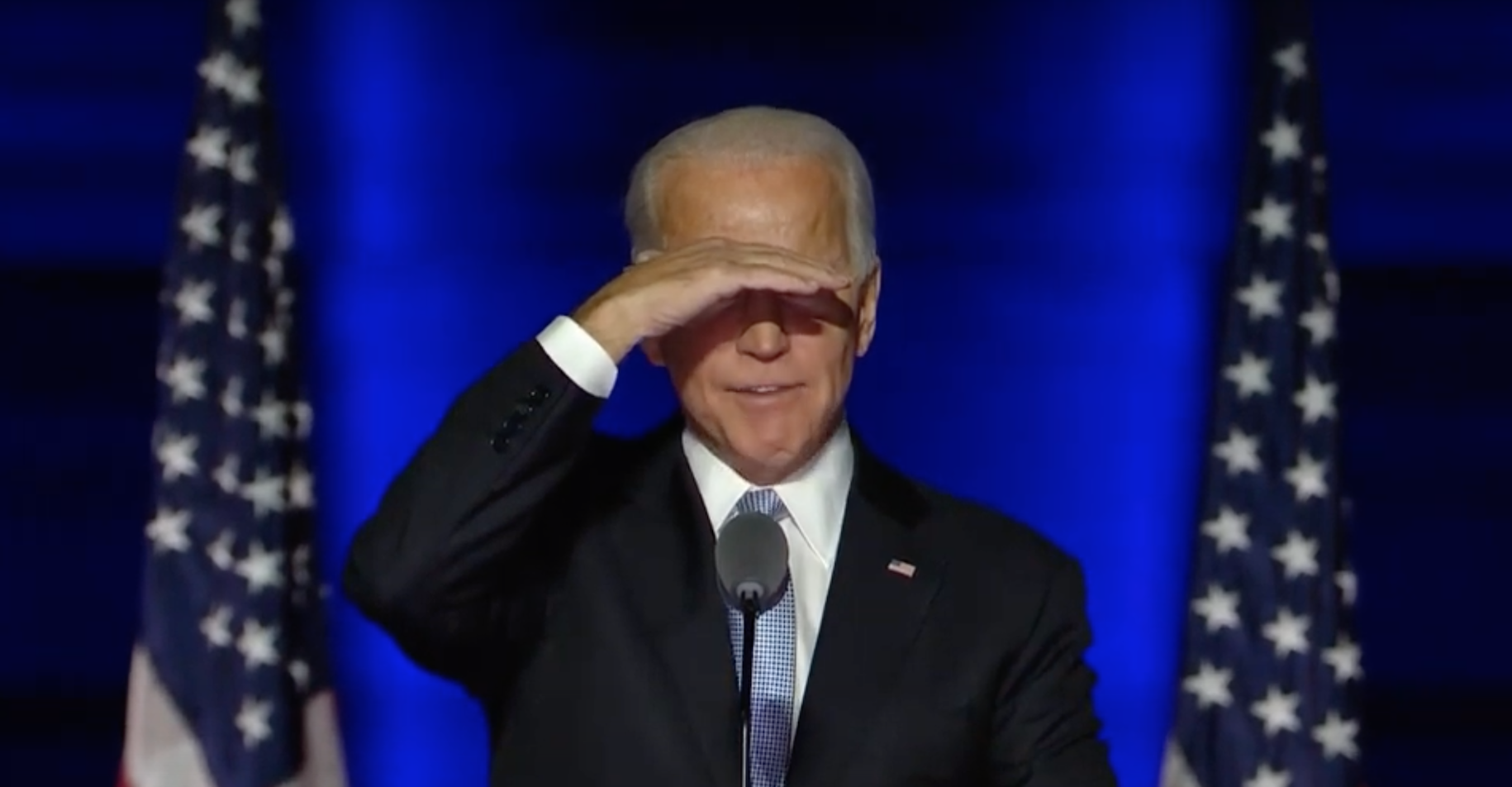 Votes are still being counted, recounts will be held in Wisconsin and Georgia, and a plethora of lawsuits are being filed, but the media has already anointed Joe Biden as the winner of the election. President Trump hasn’t conceded the election and may never do so.

In her Friday presser, House Speaker Nancy Pelosi claimed not only that Joe Biden is the winner but that he has a mandate to enact the Democrats’ agenda. She said, “I wish we weren’t wearing masks so we could see how exciting it is to come before you today with Joe Biden having the tremendous mandate that he has. This morning it is clear, that the Biden-Harris ticket will win the White House,” adding that “President-elect Biden has a strong mandate to lead.”

Not-quite-president-elect Joe Biden repeated Pelosi’s claim in his Friday night speech. Of the voting public, he said, “They’ve given us a mandate for action on COVID, the economy, on climate change and systemic racism. They made it clear they want the country to come together, not continue to pull apart.” In his Saturday night victory speech, Biden claimed to be a unifying force. We have to remember that as vice president, he didn’t demur to any of Obama’s efforts to spread disunity and identity politics in America.

Setting aside the fact that Biden been declared the winner, Pelosi’s and Biden’s claims of a “mandate” are completely false.

It will be weeks, if not months, before the recounts are completed. The lawsuits being filed by the Trump campaign will take as long to wind themselves through the courts. The relatively small gap between the votes Biden received and those Trump did and the recounts and the lawsuits are all evidence that Biden’s probable win will be by a tiny margin. Small margins in elections are not mandates.

If Biden wins, as it appears he has, it will be by a far narrower margin. At this writing, Biden has 290 electoral votes (more than enough to win) to Trump’s 214, according to the Wall Street Journal. Trump won about 70 million votes to Biden’s approximately 75 million.

The Republicans have apparently retained control of the Senate, and the Democrats lost four House seats.

In sum, there was no “blue wave” to wash the Republicans out of the White House and control of the Senate. There was no repudiation by the voters of Trump, his accomplishments or his agenda. Biden’s apparent win gives him a mandate for precisely nothing.

The biggest issues in the election were the COVID-19 pandemic and Trump’s personality. As I wrote last week, Biden’s plan to deal with the pandemic is essentially to take credit for what Trump has already done. Aside from ordering mandatory wearing of masks and closing down the economy again (neither of which a president can order), Biden has nothing to add.

Trump’s personality has not served him well. Biden’s campaign amounted to “I’m not Trump” and deference to the Dems’ hard-core Left, all of which was a clear advantage but not enough to dissuade millions of Trump voters.

The economy is a big issue in every presidential election, and “climate change” is directly connected to it, though the Democrats don’t believe it is. Third-quarter U.S. economic growth was a record: more than 7 percent over the prior quarter and at a rate of over 33 percent annually. The “V-shaped” recovery from the pandemic is as Trump said it would be. Biden will be happy to take credit for it despite the fact that none is due him.

The Left has been trying to scare us with the climate change boogeyman for about four decades, but it was not an issue in the campaign. People didn’t vote against Trump because of his position on it, but some may have voted for Biden because of his in combination with his other positions. The pure anti-Trump vote among Democrats probably outweighed Biden’s other policy promises.

What Biden proposes on climate change is action that will severely damage, if not destroy, the U.S. economy.

Biden promises to rejoin the Paris Climate Accords, which would cost roughly half a million American jobs by imposing restrictions on carbon emissions. China and India — two of the largest global polluters — are essentially exempted from compliance.

Biden promises to “transition” away from the oil industry by 2050 by converting America to solar and wind power. Not only will that cost at least $5 trillion, but it will kill even more American jobs.

Biden promises to create hundreds of thousands of “green” jobs in the switch to solar and wind power. How that can be done is not evident, but it is clear such a transition would make the U.S. energy supply dependent on the weather. The less the wind blows and the less the sun shines, the less electricity will be available. That’s a recipe for starving our economy. Meanwhile, China is building more coal-fired generating plants and India is refusing to obey the Paris Accords unless it receives billions in aid.

Biden’s claim of a mandate to deal with “systemic racism” is based on ideology, not fact. Yes, there is racism in America, but there is no evidence that it is systematic or institutional.

Biden and Harris will face significant brakes on their claims to a mandate. If, as it appears, the Senate will remain in Republican hands (the Georgia runoffs are winnable) and with the Supreme Court now almost reliably conservative, they will not be able to accomplish much of the Dems’ radical agenda. It will be a long, tough four years for us, but there is no reason to lose heart.