U.S. Customs and Border Protection encountered 239,416 illegal aliens in May alone. This is yet another monthly record, as Biden becomes the Babe Ruth of border destruction.

May’s figure was “the highest number in DHS history,” Fox News Channel’s intrepid southern-boundary correspondent Bill Melugin told Fox Radio’s Guy Benson. Melugin added that May’s total encounters with illegal aliens shattered “the record, which was set last month in April, which was 234,000, which broke the record for March, which was 221,000. So the last three months in a row have all been record-breaking months and May being the highest at nearly 240,000.”

In Biden’s first full 16 months in office (from February 1, 2021, through May 31, 2022), Border Patrol agents confronted a staggering 2,975,135 illegal aliens. These law-breaking interlopers exceed the 2,731,994 people who inhabit Alaska, North Dakota, Vermont, and Wyoming, according to the latest Census Bureau estimates. If these 2.73 million individuals established their own state — call it Rio Grandia — they would be nearly as populous as Kansas and entitled to two U.S. senators and four U.S. House representatives. Perhaps that is the point.

Compare​ these 2,975,135 to the 754,538 such encounters during President Donald J. Trump’s final 16 months in office (October 1, 2019, through January 31, 2021 — including Biden’s first 11 days). Since Trump jetted to Mar-a-Lago, these hard numbers confirm, illegal-alien apprehensions have ballooned under Biden by a mind-blowing 394 percent. 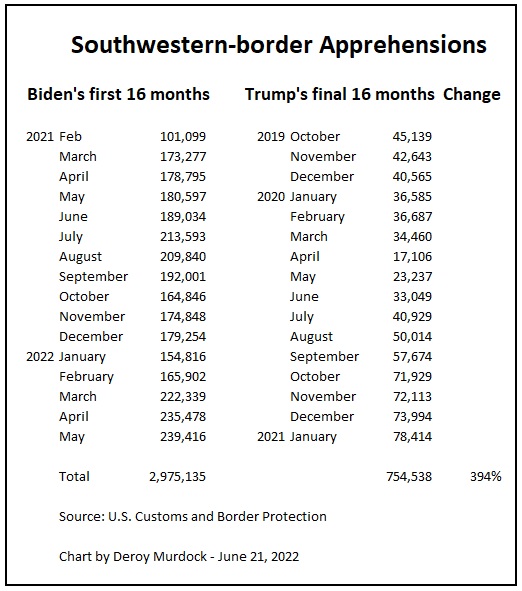 Joe Biden must be vying for the Border-Elimination Hall of Fame. By now, he deserves his own dedicated wing.

And these statistics do not include so-called “got-aways.” Border Patrol detects these illegal aliens but is unable to intercept them. The Center for Immigration Studies calculates that 706,667 illegals have gotten away and entered America under this administration. Biden’s got-aways slightly overshadow Washington, D.C.’s 705,749 denizens.

At least these “got-aways” can be estimated. Other illegals invaded the USA while being neither perceived via infrared equipment nor observed through binoculars.

How many people broke into America completely surreptitiously?

Your guess is as good as any.

Last September, several equestrian Border Patrolmen resisted scores of Haitians as they tried to penetrate U.S. soil at Del Rio, Texas. These federal officers rode atop horses that galloped back and forth while these Haitians waded up from the Rio Grande.

Leftists screamed that these agents used whips to beat the Haitians into submission.

“This is another clear demonstration of just how much our immigration system is rooted in anti-Blackness,” said Jane Bentrott of Justice Action Center, a public-interest law firm that represents these Haitians.

“As we all know, it also evoked images of some of the worst moments of our history, where that kind of behavior has been used against the indigenous people of our country, has been used against African Americans during times of slavery,” Vice President Kamala Harris demagogued on ABC’s The View.

Not be outdone, Biden decried the officers’ actions.

“It was horrible what you see, what you saw — to see people treated like they did, with horses barely running them over and people being strapped,” Biden told journalists at the White House. “It’s outrageous. I promise you, those people will pay.” Biden added, “There will be consequences.”

But the Department of Homeland Security’s inspector general begged to differ. As the Washington Free Beacon reported, the IG “cleared the agents of criminal wrongdoing” and declined further investigation.

Moreover, federal attorneys must have missed Biden–Harris’s “guilty as charged” memo. On June 10, administration attorneys walked into the U.S. District Court in Washington, D.C., to argue the case of Haitian Bridge Alliance et al. v. Biden et al. While POTUS and VPOTUS condemned these Border Patrolmen and likened them to slave drivers, federal lawyers fought a class-action suit by Haitian illegal aliens who complained of racial discrimination, in addition to these supposed whippings.

But rather than apologize to these Haitians and Zelle them damage payments, the Biden administration told them to pound riparian sand.

“Individual plaintiffs have failed to demonstrate that they have standing to bring their claims,” Biden’s attorneys pleaded. Translation: Get lost — your case doesn’t deserve to be heard. With that, these lawyers, who work for Biden, did not assure that these “horrible” Border Patrol agents “will pay.” Instead, they moved to dismiss the Haitians’ case.

So, the mounted Border Patrol agents rode into the sunset.

Biden ignored the DHS IG’s lack of interest in these purported whippings. He disregarded his own administration’s rejection of the Haitians’ complaints. Biden even spurned the objections of Agence France-Presse photographer Paul Ratje, whose images ignited this controversy.

“I didn’t ever see them whip anybody,” Ratje told KTSM, NBC’s El Paso, Texas, affiliate. “That’s something that can be misconstrued when you’re looking at the picture.”

The Washington Examiner reported last week that Biden’s U.S. Customs and Border Protection planned to hammer these federal officers with “administrative violations” for whippings that never occurred and hurt no illegal aliens. These agents slapped reins at horses but never snapped whips at Haitians.

This revolting development merits an abuse-of-power lawsuit against Biden by these once-mounted Border Patrol agents. For now, they are relegated to desk jobs and forbidden to defend America’s boundaries on horseback. Team Biden prohibits them from practicing this very special skill.

Rather than the “nice guy” who captured the White House by promising to Make Washington Normal Again, Americans are stuck with a snarling, vindictive old man who takes the U.S.–Mexico “border” even less seriously than his former boss’s tragicomic Syrian “line in the sand.”