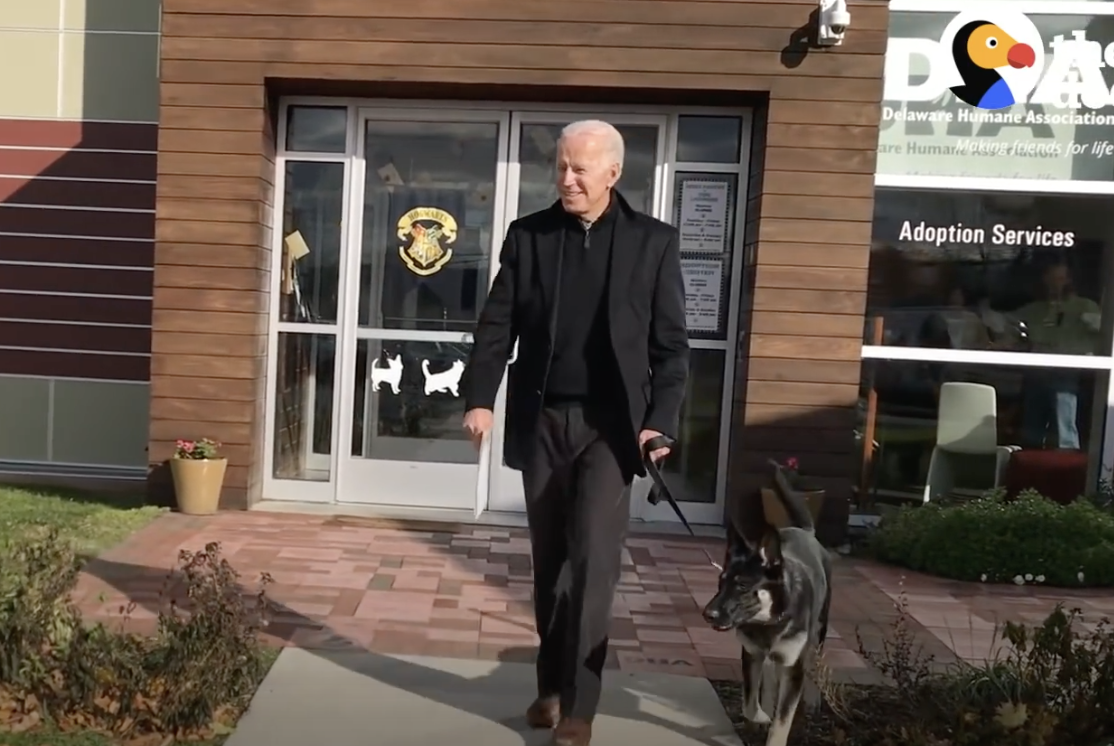 “If you want a friend in Washington, get a dog,” Harry Truman is often credited as saying.

Besides being friends, dogs also make for excellent scapegoats, especially if you happen to be a frail, 78-year-old president-elect who takes a solo spill on his property and doesn’t want the media to focus on his fading mental or physical fitness.

In other words, I think this whole “dog-trips-man” story may be a cover for some more nefarious — or at least embarrassing — incident.

Call it Puppygate. Sure, it’s a conspiracy theory. But because this is 2020, it’s also probably true.

In case you missed Biden’s brief but eventful emergence from his basement over the weekend, here’s the background.

On Sunday afternoon, Biden (and his sizable entourage) paid an emergency visit to an orthopedic specialist after injuring his ankle at his mansion in Wilmington. The Associated Press reported that the president-elect “fractured his right foot … that will likely require him to wear a boot for several weeks.” A press release from Biden’s office claimed that the former vice president had “slipped” while playing with “one of his two German shepherd dogs.” In a telling detail that lends the whole incident plausibility and color, we learned that Biden was playing with Major, the shelter dog that the Bidens adopted (to universal acclaim) in 2018.

Obviously, this sounds a lot better than “he tripped over the teleprompter cord while looking for the bathroom.”

Meanwhile, Biden himself has said nothing. No press conference, no Zoom call, no tweets, no telegram.

Why would a man who enjoys almost unanimously sympathetic — even sycophantic — media coverage shun the press after a minor incident involving his beloved dog? What’s he hiding? Even after Ronald Reagan was shot, he still cracked jokes with doctors and staff, helping indirectly to reassure the American public. (My favorite, when told that the government was running normally: “What makes you think I’d be happy about that?”)

How is it that the soon-to-be leader of the greatest nation on Earth is already so protected and controlled by faceless, nameless “handlers” that he can’t even make an informal pit stop in front of the cameras to tell us how he’s doing? Does his team really think a hard-hitting journalist is going to slip in a tough question about Ukraine? Reporters haven’t hit Biden hard for two years. Why would they start now?

A British psychic recently claimed that she’s had telepathic communications with Biden’s dogs (“They say to me that he’s a special man with great empathy for people and animals”). Get her on the phone. Maybe she knows what’s going on.

Or is “Biden’s office” afraid of what he’s going to say, particularly if the whole “cavorting-with-my-dog” thing is a lie? “Here’s the deal — Major tripped me, ate my inaugural address, and placed incriminating emails on my laptop. No joke. This is God’s truth. My word as a Biden.”

Whatever the details of the actual incident are, we definitely know that his fall definitely has nothing to do with his physical or mental decline, neither of which exists. Definitely.

In its article about the accident, the AP helpfully reminds us that after Biden’s last check-up in December 2019, his doctor described him as a “healthy, vigorous, 77-year-old male” who is “fit to successfully execute the duties of the Presidency.” He acknowledged that Biden is on several medications, including statins to treat high cholesterol, the side effects of which include muscular weakness and “mental fuzziness.” Rest assured, though, his slip, trip, tumble, or fall on Sunday had nothing to do with that. It was the fault of a well-meaning, rambunctious, adorable pound puppy, who broke his master’s foot as he was vigorously planning how to successfully execute the duties of the presidency.

In fact, we should be talking about the dogs, not the fall. Did you hear that Major is a shelter dog, the first ever in the White House? Isn’t that wonderful? Dr. Biden and her husband basically saved his life, though it turns out all of Major’s siblings found homes as well. There was an article in People magazine and about a thousand other media outlets about it. I’m really looking forward to dozens of puff pieces about Biden’s pets. Heck, somebody should publish a children’s picture book about them.

Of course, I still remember how the media went apoplectic back in 2016 when they found out that Donald and Melania weren’t bringing a fur baby to the White House to scratch up the antique wooden floors and poop on the Persian rugs. Yet I doubt the #Resistance would have embraced the Trumps even if they had rescued an entire pack of stray chihuahuas and let them loose in the Oval Office. They would have whined about cultural appropriation.

And then there’s Major’s self-incriminating statement about the incident, which sounds coerced to me. No dog could be this dumb, not even one owned by Joe Biden.

“’Paw my god! Dad @JoeBiden, I’m so, sooo sorry I pulled super hard when we played tug-of-war earlier,” said Major on the official Instagram fan page for Biden’s dogs. “I am still a puppy & very high energy, I am so sorry you sprained your ankle because of me. I pawmise to make it up with lots of kisses. I’ll be good, I pawmise.’”

Nauseating, right? But what is most nauseating about it? The schmaltzy anthropomorphization of a pet? The corny puns? Or is it the shameless attempt to turn an innocent creature like Major into a patsy — a fall dog, if you will — for a decrepit, phony politician like Biden?

If you said, “The last one, Rob,” welcome aboard my big, beautiful conspiracy theory.

It’s high time to look into Major’s possible Russian ties. Unlike Biden’s 10-year-old German shepherd, Champ — a purebred product of a so-called puppy mill — Major’s pedigree is far murkier. Is there Siberian Husky or Borzoi in his family tree? Major could be a Russian plant, colluding with officials in the Trump administration to compromise (even eliminate!) the semi-loyal opposition before January 20. There’s still time for Adam Schiff and Nancy Pelosi to issue subpoenas and call for hearings. Bob Mueller is only one fake dossier away from full employment again. C’mon, Democrats — give us a last eruption of paranoid craziness before Gimpy Joe is inaugurated!

Of course, since Democrats have had a historically hard time proving Russian involvement in U.S. elections, perhaps the better approach might be to investigate Major’s connections with prominent conservatives. “Major” obviously is a militaristic, even fascistic, name, which Democrats always insist Republicans are into these days. Trump could be paying a furry spy — a dog-faced pony soldier — to infiltrate the Biden team. I eagerly await future Pulitzer Prize-winning exposes by the New York Times and Washington Post revealing the relationship between the Delaware Humane Shelter and the Koch brothers.

But seriously, folks (to quote America’s most famous dog lover), if Puppygate is any indication of how Team Biden plans to interact with the media and America in the future, it bodes ill for open government and democracy. If Biden’s leash is so short that he isn’t allowed to speak frankly and spontaneously about a dog-related injury, what is he allowed to do?

What “dark winter” of media blackouts is heading our way?

UPDATE 12/04/2020: On Thursday evening, in an interview with CNN, Joe Biden finally came clean on how he broke his foot. He was showering with his dog. Kind of.

“What happened was I got out of the shower. I got a dog and anybody who’s been around my house knows — dropped, little pup dropped a ball in front of me, and for me to grab the ball,” Biden explained. “And I’m walking through this little alleyway to get to the bedroom, and I grabbed the ball like this and he ran. And I’m joking, running after him and grab his tail. And what happened was that he slid on a throw rug, and I tripped on the rug he slid on.”

With Biden, we should have known that nudity would be involved.