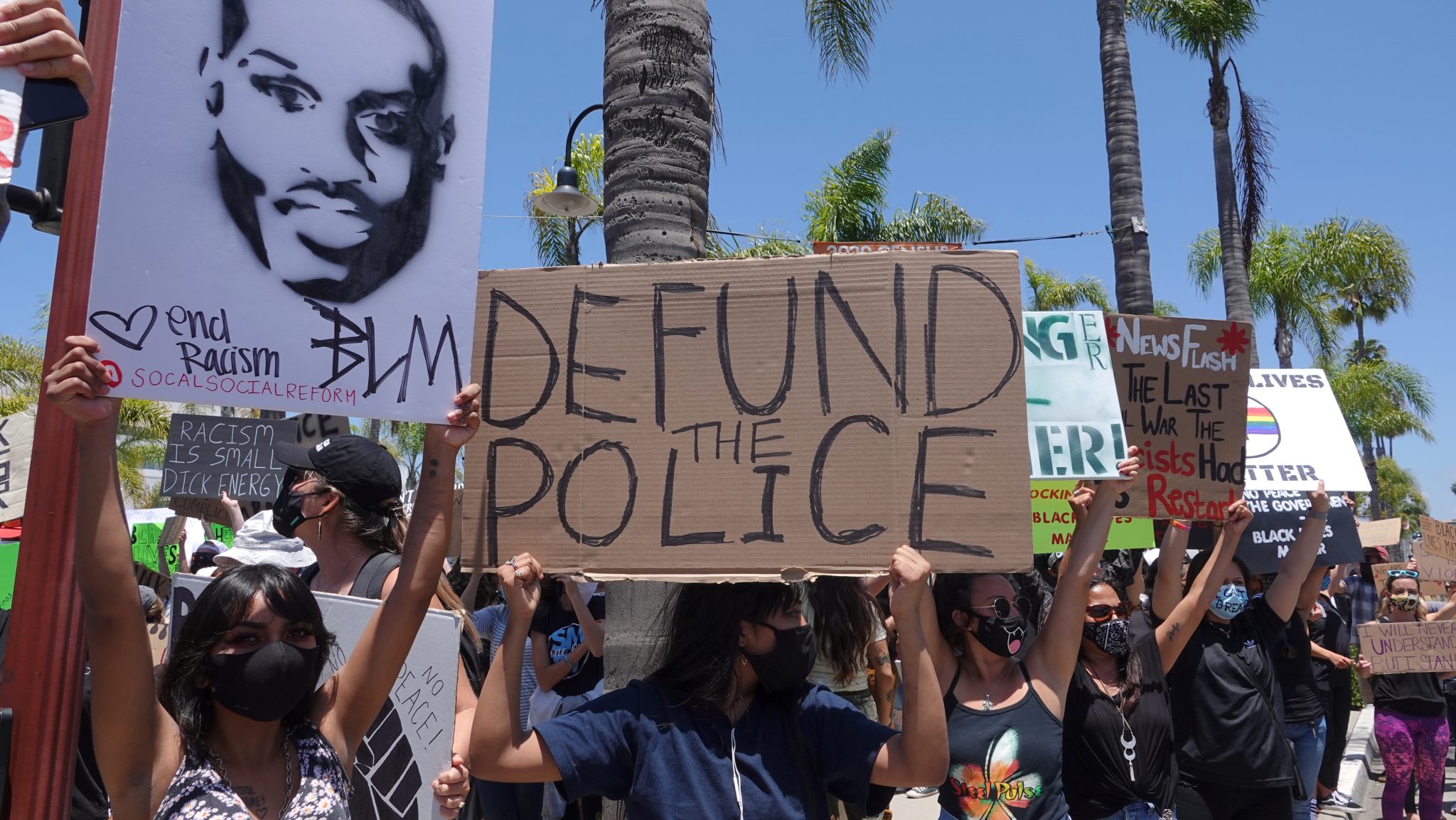 The Democrats’ mission is not to defund the police. It is to devour the police. And who better than a Biden Department of Justice to do it?

Once former Vice President Joe Biden was safely declared the winner of the 2020 election, Democrats took a fleeting respite from genuflecting to their young Marxist firebrands and surveyed the down-ballot wreckage. Suddenly, there was pooh-poohing of the notion that anyone actually wanted to defund the police. This news was announced by self-styled “centrist” Democrats, who’d seemed to have lost their voice on that subject while America’s cities burned, our businesses were looted, and our crime rates spiked — and while what passes for the “center” moved about thirty yards leftward on the party’s gridiron.

Naturally, the outraged conservative press was quick to roll the tape. In fact, the AOC “Squad” and its vitriolic imitators, one after the next, were adamant: Not only were they quite serious about dismantling police departments, but they had already taken concrete steps in several cities to slash law-enforcement budgets.

The prospect of gridlock on Capitol Hill intensifies Biden’s need to resort to executive action to appease his party’s increasingly hard-left base. That brings the nation’s police departments to the fore.

Enter Vermont Sen. Bernie Sanders, who envisions wielding heavyweight influence in the incoming Biden administration. An “independent,” Sanders has polished his “Democratic Socialist” routine — Democrat when caucusing on Capitol Hill; socialist when speaking on campus, hobnobbing in Hollywood, and campaigning for the likes of Chesa Boudin, the son and foster son of Weather Underground terrorists who is now, of course, San Francisco’s district attorney and paragon of the progressive prosecutor project, for which the moneyed Left has opened its coffers in urban centers across the country. Sanders, aligned with both Team Biden and the Squad, assures everyone that it’s not that the incoming government supports “defunding the police.” Rather, he says, “What we talk about is making police officers accountable.”

If you hear a little voice in the back of your head — actually, a deep baritone voice — saying, “And if you like your police, you can keep your police,” then you’re on to something.

It is not hard to predict what course the Biden Justice Department will take. While there are often reasons to doubt campaign rhetoric, there is no reason to doubt the former Obama vice president’s commitment on the hustings (or was it in the basement?) to revive Obama administration law-enforcement practices. Far from drying up police budgets, Biden’s approach will entail ramping up federal spending to resume the project of reprogramming police on the “progressive” model, under Washington’s watchful eye.

This project is already well underway. Any Trump-era pause was negligible. But there are differences, salient and alarming, that distinguish President-elect Biden’s political moment from Barack Obama’s 2008 ascendancy.

The latter took office with his party in firm control of both congressional chambers. Priority was thus given to landmark progressive legislation: the Obamacare transformation of health care and the Dodd–Frank overhaul of financial regulation. Once cemented in law, these enterprises would prove nigh impossible for Republicans to roll back, no matter how destructive they might be.

Contra 2008, the election of 2020 was a dismal showing by Democrats. Aside from a presidential election that was far from the cakewalk they’d anticipated, the contest brought stinging defeat. Republicans are highly likely to hold the Senate, and they made dramatic House gains that will stifle any ambitious Democratic legislative agenda.

All in all, that is good for the country. But for law enforcement … not so much.

The prospect of gridlock on Capitol Hill intensifies Biden’s need to resort to executive action if he is to appease his party’s increasingly hard-left base. And that brings the nation’s police departments to the fore. Their summer 2020 siege has made them a soft target, and the formula for neutering them was already perfected by the Obama Justice Department.

To draw another marked now-versus-then contrast, remember 1992, when Gov. Bill Clinton sharpened his trendy “New Democrat” progressive-but-practical message by returning to Arkansas, even as the presidential campaign heated up, to preside over the death-penalty execution of Ricky Ray Rector. Rector had murdered a police officer but then botched a suicide attempt, resulting in a lobotomy and diminished mental capacity. He became a cause célèbre in the hard Left’s anti-capital-punishment crusade. Once in the White House, and egged on by some Congressional Black Caucus members whose cities were ravaged by crack-fueled gang crime, Clinton further burnished his tough-on-crime credentials by backing the 1994 Violent Crime Control and Enforcement Act. It dramatically enhanced federal prosecution and sentencing — but with a catch that we’ll come to momentarily.

Ever the weathervane, a notoriously windy Senate mediocrity then chairing the Judiciary Committee also claimed credit for that legislation, ceaselessly referring to it as the “Biden Crime Bill.” No more. Thirty-six years later, the Biden campaign disappeared allusions to it from the candidate’s long history of … um … accomplishments.

Vigorous law enforcement is an evanescence of a Democrat time out of memory. Now, it is a matter of wiping out “antiquated” thinking — serious time for serious crime; “Broken Windows” policing; and proactive, intelligence-oriented enforcement practices. You may remember these as the quaint strategies that ushered in a generation of record-low offense rates and thriving, prosperous cities.

Do you still hear that deep baritone whispering, “The 1980s are now calling to ask for their law-enforcement policy back”? That may be because Obama’s portentous “21st Century Policing,” accelerated by the progressive prosecutor project, is gradually bringing back the dystopian urban centers of the 1970s. (By the way, have you heard that an eye-popping three hundred thousand people have moved out of New York City during the last eight months of coronavirus lockdowns, racial agitation, attacks on police, and rising crime?)

The prescription for all this stems from that erstwhile “Biden Crime Bill.” To appease Democrats queasy about robust enforcement and harsh sentences, Clinton, Biden, et al. tucked in a provision that criminalizes “any government authority” — including state and municipal police departments — that “engage[s] in a pattern or practice of conduct by law enforcement officers … that deprives persons of [federal] rights, privileges and immunities.” Significantly, the law empowers the attorney general to file civil lawsuits to “obtain appropriate equitable and declaratory relief to eliminate the pattern or practice.”

Here is how the game works. Whenever there is a police-involved incident with racial overtones, particularly if a black male subject has been shot or physically subdued, Black Lives Matter mobilizes, and the Justice Department snaps to, saber-rattling about a possible civil-rights prosecution of the cops. These tend to fizzle out quickly because the police use of force is generally lawful (e.g., the subject has committed a crime, resisted arrest, and/or threatened the officer). Yet, to mollify the agitators (with whom the Obama administration was known to consult), the Justice Department trumpets that it has commenced a “pattern or practice” investigation of the entire police department.

These investigations are extensive and prohibitively expensive to defend against. The feds pore over police reports of arrests, stop-and-frisks, and interviews, searching for traces of racism — and, when they can’t find it, resorting to the hocus-pocus of “disparate impact” to infer it. Strapped cities cannot afford to battle the Justice Department’s Civil Rights Division and bottomless budget. Plus, Democrat city officials delight in “negotiating” with a Democratic Justice Department to hog-tie the cops.

The result is a consent decree, in which the police are subjected to federal monitoring and training in “community policing.” This euphemism connotes the full progressive menu of anti-Broken Windows measures: the police officer reimagined as social worker; a hands-off approach to “quality-of-life” offenses; the easing of anti-gang strategies (targeting gang crime, you see, is just a pretext for surveillance and harassment of poor communities of color); and such alternatives to criminal enforcement as diversion, counseling, family intervention, and “restorative justice” (where the perp and the prey, both victims of our “broken system,” meet to talk it out rather than abide all that icky prosecution stuff ).

Understand, none of this anti-law-enforcement approach to law enforcement requires an act of Congress. It is all in the category of executive action, governance that President Biden and his Justice Department can impose nationally, without effective oversight by lawmakers — or, for that matter, courts, which can address police excesses but are powerless, when police stand down, to compel faithful execution of the laws.

Will there be pushback against this? Probably some. Sensible Democrats know that their party was punished on Election Day because Americans are frightened by urban unrest, rising crime, and the anti-enforcement fervor that has been embraced by leading Democrats. In many neighborhoods, police have been paralyzed into passivity — those of them, that is, who have not raced to file retirement paperwork. But the money and the energy on the left is with Black Lives Matter and the movement to abolish policing as we knew it in the quarter-century urban renaissance that began in the early Nineties. Biden will need to show them some results, and the Obama years provide the template.