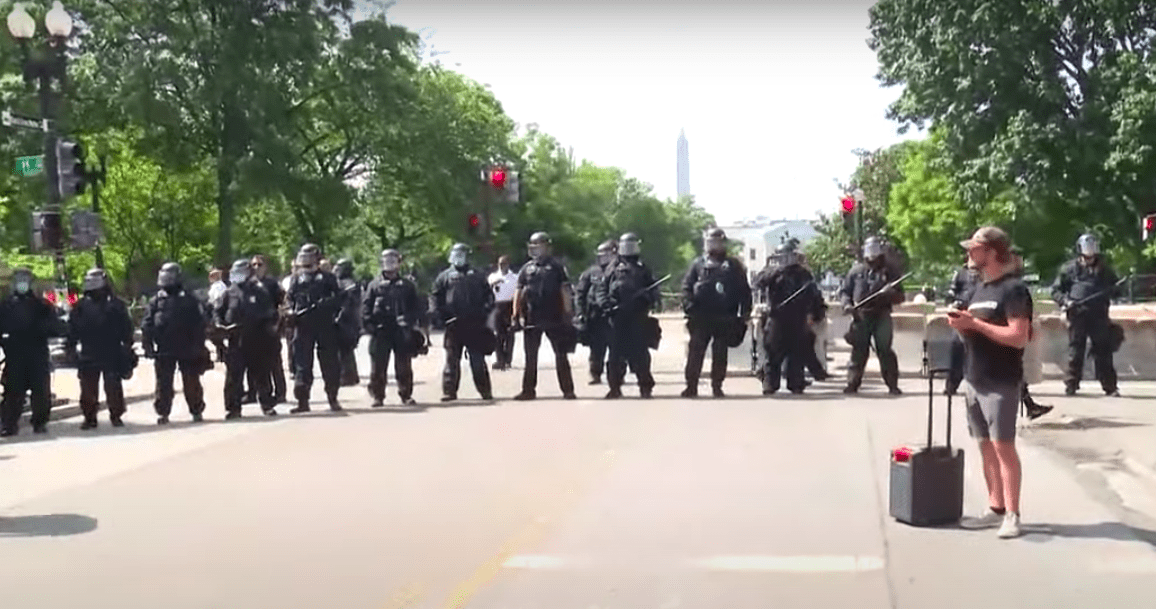 On Monday, demonstrators protesting systemic racism and the death of George Floyd attempted to instate an autonomous zone in the heart of the nation’s capital. The activists built barricades and set up tents just a few blocks from the White House in Washington, D.C. Protesters brought construction materials, such as chain-link fences, to define the boundaries of “Black House Autonomous Zone” (“BHAZ” for short) along H Street and Vermont Avenue, near Lafayette Square. Since Tuesday evening, authorities have regained control of the area and erected barriers, effectively putting an end to the autonomous zone by preventing protesters from accessing the area.

The initials “BHAZ” were graffitied on the pillars of St. John’s Episcopal Church, and demands of abolishing the police and ending systemic racism were spray-painted on the Hay-Adams Hotel. A makeshift sign constructed from plywood marked the barricaded entrance to the self-acclaimed autonomous zone.

In the evening, when some protesters attempted to topple the statue of Andrew Jackson located in the middle of Lafayette Park, police stepped in to clear the area. Officials reported warning demonstrators to leave, saying their presence posed a risk to public safety. When some protesters refused to comply, going so far as to assault two police officers, authorities used pepper spray and batons to force the crowd back. Two arrests were made during the process of clearing the block.

On Tuesday morning, police closed off public access to H Street and removed the makeshift “Black House Autonomous Zone” signs that had been erected the day before. Protesters gathered, demanding that they be allowed to reenter the zone, but police stood their ground and denied access to the area. By Tuesday evening, the crowds of protesters had largely disbanded, and authorities began assembling temporary fencing around Lafayette Square.

In an interview after the conflict, Metropolitan Police spokeswoman Brianna Johnson promised, “MPD will always protect the rights of those engaged in peaceful First Amendment assemblies, however, those who engage in criminal behavior will be held accountable.”

In the aftermath, President Trump tweeted, “There will never be an ‘Autonomous Zone’ in Washington, D.C., as long as I’m your President. If they try, they will be met with serious force!” Twitter flagged the tweet, because it “violated the Twitter Rules about abusive behavior,” but the president made his point, reinforcing his claim that he is “your president of law and order.” The incident also prompted Trump to announce his plans to sign an executive order to protect federal monuments from vandalism.

The short-lived nationhood of the self-proclaimed “Autonomous Zone” in the nation’s capital is a testament to just how far some activists will go to ensure that their demands are heard. First in Seattle, now in D.C., these episodes raise the question of just how many more cities will witness this new species of insurrection. Only time will tell.