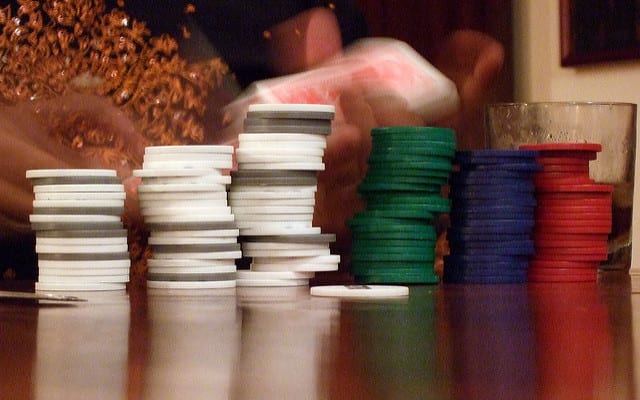 The occasional situation arises in No-Limit Texas Hold’em where you have a monster hand, but are placed in a situation where you can make a big bet that’s likely to be called.

This is especially true in the lower level $1-$2 NLHE games that I, and most of you reading, probably play.

We like to amass big stacks of chips, don’t we? Let’s look at a few examples where you can really make your opponents pay with a big bet.

• If you make a straight that’s slightly higher than the obvious straight, bet big. Let’s say you’ve got a 10-Q and are able to see a flop cheaply and it comes 7-8-9. This gives you an open ended straight draw, but you may notice that you’re likely to be much better off if a jack comes instead of a six. With a six you split the pot with anyone who also holds a ten, but with a jack you beat anyone who has a ten because you would then hold a queen-high straight. Let’s say you see the turn, hit your jack and there is not three of the same suit on the board, so no flush possibility. In most cases, you should bet big here. You have the nuts, but you may be facing an opponent who is likely to call you down with his ten, for a jack-high straight. Most opponents with that hand won’t fold here so it’s worth the risk of the fold in order to win a big pot. Don’t worry about chasing someone off who doesn’t have a straight because you weren’t likely to win a big pot anyway with the obvious straight on board and you’ll price out draws to hands like full houses that could beat you on the river. Other hands that provide situations like this are when you hold J-Q and the board comes 7-8-9-10, or 7-8 on a board of 3-4-5-6. You get the idea.

• When you flop trips and turn or river quads and there’s an ace on board, bet reasonably big. The reason for this is while people are wary of four of a kind the hand is made so rarely they will usually call you down in case their top full house is good or at least tied. Here’s an example: you’ve got a J-K and call a pre-flop raise. The flop comes J-A-J and you call another bet. After another jack shows on the turn you call another bet. On the river, the player with the ace may get suspicious and check to you or he may bet out. No matter which he does, bet or raise about the size of the pot because it’s going to be tough for him to fold his full house. You could get paid handsomely as he calls hoping to split the pot.

• If you make a straight flush, bet big on the river hoping you run into a full house or ace-high flush. If you make a straight flush on the turn, don’t bet big yet because someone could be lurking with a set and could river a full house that will be impossible to fold. Your hand cannot be beaten so there’s no point in chasing other players out on the turn. If someone has been leading on the turn when the third of a suit appears and leads out again on the river despite a call from you, she could have a flush, maybe the ace high, so go ahead and put in a big or all-in raise and hope you get called.

These situations are relatively infrequent so it pays to be aware of when they might occur so you can grow your chip stack. I hope you hit big using these tips.