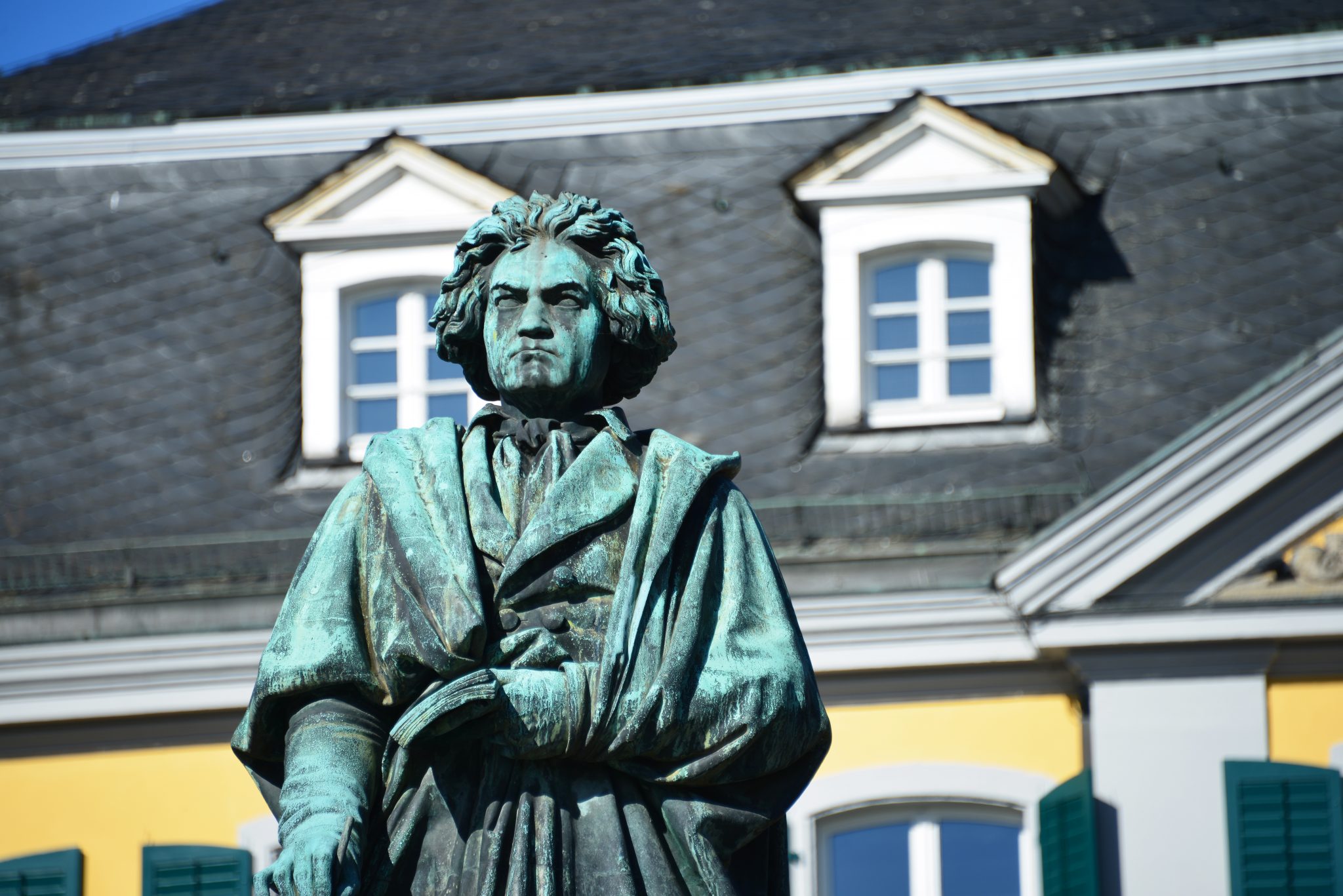 According to Vox, Beethoven’s Fifth Symphony is now a symbol of white supremacy and classism.

As Beethoven’s Fifth itself would say: “Dun-dun-dun-DUNNNNN.”

Those famous four notes are known as the “Fate motif,” and they’re an accurate theme song for “The 5th on Pop,” a collaborative podcast between Vox and members of the New York Philharmonic, which in its latest episode claims that Beethoven’s Fifth is all about wealthy white men showing off their cultural importance and shutting everyone else out of the concert hall.

Now, you might have some questions about this. First off, didn’t Beethoven write the Fifth as he was going deaf, which makes it a pretty impressive personal triumph? And don’t people still listen to it because, frankly, it’s a banger?

Unfortunately not. For women, LGBTQ+ people, and people of color, the podcast’s introductory notes say, “Beethoven’s symphony may be predominantly a reminder of classical music’s history of exclusion and elitism.”

Host Charlie Harding starts off the podcast on a derisive note, questioning the symphony’s inclusion on the Voyager spacecraft’s Golden Record: “What are they going to think of us? When some alien civilization discovers this golden record and we greet them with ‘Dun-dun-dun-DUNNN’ … Are we the conquering intergalactic empire?”

Co-host Nate Sloan continues, “Not everyone feels that Beethoven is the best representation of our species’ collective achievement. For a lot of people, Beethoven’s Fifth Symphony doesn’t represent triumph and resilience but elitism and exclusion.”

It seems pretty obvious where we’re headed — toward an attempt to exclude Beethoven from the canon — but I decided to hear them out. How so? Well, the hosts explain, before Beethoven, people participated in musical performances: they clapped and gasped and yelled at Mozart’s premieres, for example. After him, they listened in silence, in a sort of “silent communion” with the music.

Wow, you might think, they must have thought Beethoven was really good, if he struck them speechless.

Well, no, Harding and Sloan explain, actually a culture of exclusion emerged wherein wealthy white men came up with all sorts of rules to police people’s conduct in the concert hall and to oppress them outside of it.

Anecdotally, in one year as a music critic in New York, I ran up against every one of these issues: people clapping at the wrong time and getting up to leave between movements because they thought the concert was over, people climbing over me to get out of a crowded row of seats, people (gasp) wearing T-shirts to concerts, and, during a cold outbreak, a concert during which the wrapper-rustlers were louder than a soft section of a violin solo onstage. This stuff happens, and it can be helpful to have guidelines and “symphony concert etiquette guides” in the program, especially considering that in 2020 most of us are rookies at this classical music thing. And it’s totally fine to wear jeans and a sweater, by the way. I’ve done it; I survived.

Yet seeing the human side of this doesn’t boost podcast rankings. Instead, the hosts interpret a 1845 diary entry by one George Templeton Strong, saying that “All women should be gagged” before entering a performance hall, as a sign that all white male music appreciators want all women excluded from all live music — when in reality people are just annoying at concerts sometimes.

Seriously: Beethoven is good, and I imagine Strong, an adherent of the “new,” quieter way of music appreciation, wanted to listen to the performance, not to the ladies chatting in the row behind him. Also, sarcasm exists, a point that Harding and Sloan miss after their feminist ally alert goes off. Here’s their interpretation of the real, misogynistic meaning of Strong’s cranky diary entry: “We need to shut up the people who we don’t want to be part of this world.”

They hit on classical music’s record on segregation and racism, too, though critic James Bennett II’s story of a man berating him for taking notes during a concert is more a sign of how much concertgoers don’t understand about the classical music world in 2020 — and of how deficient they are in basic etiquette, like not rebuking other audience members for doing their jobs — than of any sort of discrimination.

The problem with Harding and Sloan’s criticisms of the 21st-century concert scene (may it rest in peace, thanks to COVID) isn’t that they feel uncertain about what is expected, or that they want a less rigid musical experience. Many people agree with them, and have been making these arguments for a long time.

It’s the endless hyperbole and projection. It’s that they decide to turn their insecurity about wearing the wrong shoes into a claim that people who adore classical music and want to give their full attention to the performance have it out for them, or for anyone who doesn’t look like them — and, again anecdotally, in 2020 audiences are not nearly so all-white as is convenient for them to claim.

Up to this point, the podcast could have literally been named, “Why We Should Be Able to Clap During Concerts.” What a disappointment. No way this would go anywhere on social media.

Thank God we have white supremacy accusations to turn up the heat. It’s Harding and Sloan’s reading of the historical effects of Beethoven’s Fifth that gets really nasty. They argue that whatever Beethoven meant in writing his symphony — the doses of musical criticism are very light here and throughout — people took the heroic music as an endorsement of all the wrong -isms: colonialism, imperialism, “classical elitism,” German nationalism, Nazism.

Now that’s more like it. Vox could already hear the clicks coming from the production studio.

The symphony’s famous shift from a minor key to a major one is interpreted as the symbol of the rise of a new bourgeois class. The Nazis used the “Fate” motif to justify their disgusting ideology. And the Allies adopted it, too — a contradiction to the “symphony of evil” thesis that is mentioned, but the import of which isn’t discussed.

After World War II, the Fifth earned a new nickname: the “Victory Symphony.” So clearly political interpretations vary. It’s almost as if the music was about something beyond politics.

Even the countless riffs on the symphony in popular music — in jazz, bluegrass, Saturday Night Fever — can do no more than “poke back” at the phony sacredness, according to Harding and Sloan.

But it seems that these popular musicians consider Beethoven’s Fifth a cultural achievement, and find it fun or narratively or commercially useful to make their own version. Outside of the Vox recording studio, musicians and music lovers believe works of artistic genius belong to all who are willing to engage with them, and that tearing them down would only exclude ourselves from the best of our own culture.

That’s why this botched cancellation attempt is worth paying attention to: no matter how flat the false accusations fall, they can cut off listeners’ ability to approach a great work of art like Beethoven’s Fifth with open ears, as if the music was created as a gift for them. If music is the universal language, and if listeners have emotions and intellects capable of being affected by that music, then this masterpiece should absolutely be for them. Shame on those, like Harding and Sloan, who throw mud on it and then snatch it away, pointing out that it’s dirty.

For Beethoven himself, the uplift of the Fifth Symphony was most definitely universal and inclusive. Here’s how he explained why he ended the symphony in C major, not in the minor, as was common in symphonies begun that way:

Many assert that every minor piece must end in the minor. Nego! On the contrary, I find that … the major has a glorious effect. Joy follows sorrow, sunshine — rain.

But Harding and Sloan see it differently. They conclude, “In 2020, are we still going to keep celebrating this composer, or are we going to decide that maybe it’s time that we break up with Beethoven once and for all?”

If you want to hear the answer to that question, listen to their next podcast. If not, just jam out to Beethoven’s Fifth instead.