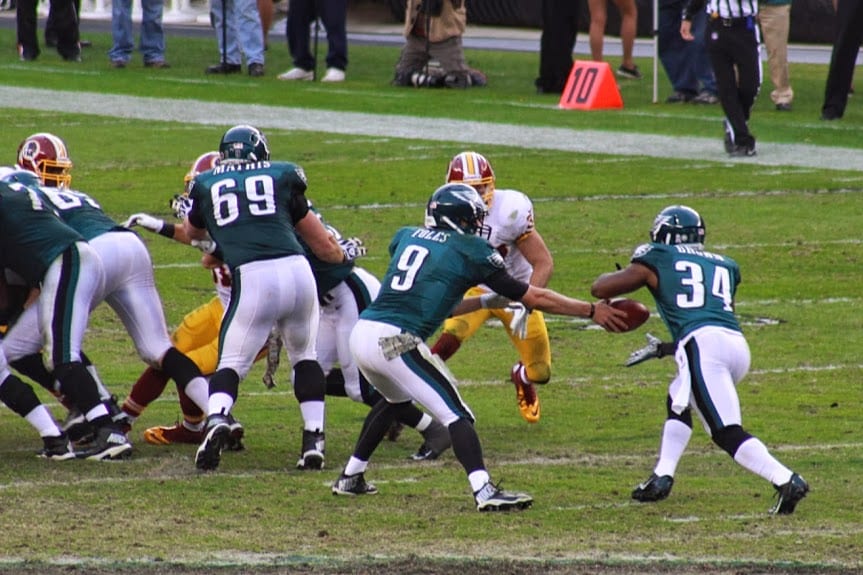 The improbabilities keep piling up for Nick Foles and the Philadelphia Eagles who are playing in Chicago on Sunday against the Bears. A month or so back it appeared that the Eagles, who are the reigning Super Bowl champions, would not be playing at all this weekend. That they would not only miss the playoffs but might finish the season with a losing record. And then, to compound the misery, their quarterback broke his back.

The Eagles record at the time was six wins against seven losses and their next game was in Los Angeles against the Rams, one of the strongest teams in football. The NFL’s best story — and it had been needing a good one — began at that moment.

The Eagle’s backup quarterback is Nick Foles. In his career of 7 seasons, he has played for the Rams when they were in St. Louis, for the Kansas City Chiefs, and twice for the Eagles. Before the 2017 season, he’d had one very good year (2013) with Philadelphia along with the usual travails of a journeyman NFL quarterback; to include trades, injuries, and benchings. At one point, he came close to quitting the game. As backup to the Eagles’ Carson Wentz in 2017, he seemed destined to end his career in obscurity.

Then Wentz went down with a knee injury. Nick Foles started at quarterback for the Eagles. He survived against Atlanta. Played brilliantly against Minnesota. Then finished off Tom Brady and the New England Patriots. Nick Foles was named Most Valuable Player in the Super Bowl.

This is the sort of thing that a scriptwriter can get away with… once. The next season calls for a different ending so the journeyman quarterback returned to the obscurity of the bench before being traded because of the way his contract was structured. The Super Bowl was nice and all that, but business is business and backup quarterbacks are worth only so much.

So, the Eagles upset the Rams last month in Los Angeles and Foles played an almost flawless game, taking the big hits that come with being a pocket passer in the NFL. One of those hits was delivered by Ndamukong Suh who delights in contact, the more brutal the better. It wasn’t a dirty hit — something Su has been known, and penalized, for — but it was exceedingly hard. So hard, you expected Foles to stay down.

The next week, he took an equally hard hit from the Jadeveon Clowney of the Houston Texans, a playoff team. This one was officially declared to be excessive and Clowney was fined the curious sum of $40,110. Foles missed just one play and the Eagles beat the Texans.

Foles got roughed up again, the next week, by the Washington Redskins and left the game with bruised ribs. But not before he had thrown a record 25 consecutive completions. The Eagles won easily.

When the Minnesota Vikings lost to Chicago that same day, the Eagles were in the playoffs as a wild card. They would play the Bears in the first round.

The Bears play defense. It is what they do. What they have always done. It is almost as though something in the DNA of that franchise breeds unusually ferocious linebackers. Players like Butkus, Singletary, and Urlacher. This year, that player would be Khalil Mack, who runs down quarterbacks the way wolves run down moose. The Bears are favored

Foles can expect to have another busy day that will almost surely include hits like the one delivered by Clowney to his ribcage, exposed and vulnerable after he had just released the ball on a pass.

Hard not to hope that he hangs in and wins this game. And, then, the next two. And, after that, another Super Bowl. He may be the least exciting quarterback of those in the playoffs. His play is solid but it relies, not on inspiration, but on doing what he has been drilled to do. That is, read the defense, look for the open man, deliver the ball. If the sport were baseball and he were pitching, he wouldn’t burn it past hitters and run up a lot of strikeouts. His game would be control and guile and his infielders would stay busy.

But he wins these big games. Going back to last season, he has been the Eagles quarterback in six consecutive must-win games. The Rams and the Texans, two of the teams the Eagles beat in the last month, will be in the playoffs. Foles has played up to the competition.

And, yet, he looks like he could be an associate professor of economics at some small, second tier state university. In press conferences, he answers questions without much emotion but politely. Like a man he wants to be helpful. He has let it be known that he is a Christian and has plans to become a pastor once he is done with football. There is a story, in the Ringer, about how he and his wife left a $200 tip for the waitress on a $150 check.

The technical term to describe Nick Foles is “good guy.” If the Eagles win on Sunday, he will undoubtedly take it in stride. And next season he will be traded.

It is, after all, just a game. The NFL, though, is a business.