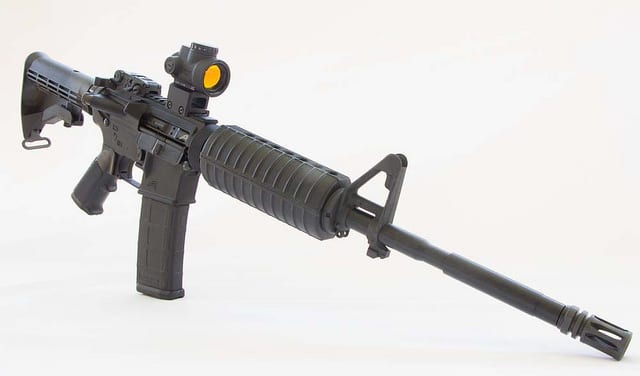 Remember, they don’t really want to take our guns. They keep reassuring us of that.

There’s just one thing: they really do.

As legal gun owners in America are still — for now anyway — protected by the Constitution, the increasingly zealous anti-gun crowd is getting creative in their attempts to take away freedom.

And they’re taking their cues from a traumatized adolescent.

There are any number of ways for the anti-gun people to make life even more difficult. Deep blue states are already ahead in the game with onerous obstacles to merely owning a firearm.

Gun owners, however, are small fry to the zealots. The big fish are the gun manufacturers.

The effort to shame various entities into stop investing in gun companies has been picking up steam in recent months.

Bank of America — the nation’s second largest bank — was fairly quick to jump on the post-Parkland hysteria bandwagon.

Bank of America will stop lending to business clients that manufacture military-style weapons for civilian use, becoming the latest U.S. financial institution to break ties with gunmakers following the mass shooting massacre at a Florida high school.

“We want to contribute in any way we can to reduce these mass shootings,” Anne Finucane, vice chairman of the Charlotte, N.C.-based banking giant, said during a Bloomberg TV interview on Tuesday.

It’s disturbing that a corporation which relies on precision will now craft business policies based on anti-2A vague talking points like “military-style weapons.” Try to pinpoint any gun hater on what that or “assault weapons” actually mean and you won’t get an answer that gets within miles of coherence. In fact, if you talk to any anti-gun activist for more than a minute (I do a weekly hit on NRA News, I get a lot of these interactions) you quickly realize that they think every firearm ever made is a machine gun.

After BofA was brat-shamed into penalizing law-abiding contributors to the American economy, it was revealed that the bank still had some business pending to help Remington Outdoor Corp. emerge from bankruptcy. That didn’t sit well with the bank’s new pubescent overlord:

Bank of America lied to everyone about not doing business with manufacturers of assault weapons https://t.co/fI5czJzTcC
Guess I'll be changing my bank soon! #BoycottBankOfAmerica

That was on Monday.

This was on Thursday:

The statement by Vice Chairman Anne Finucane follows a Reuters report on Sunday that the lender was participating in a $193 million credit facility that will help stabilize Remington’s business when it emerges from bankruptcy this month.

After the report, activists including student gun control activist David Hogg were critical of the bank and took to Twitter using the #BoycottBankofAmerica hashtag. Hogg was a student at the high school in Parkland, Florida, where a February shooting helped touch off a renewed push for stricter U.S. gun control.

“Let me be clear – we are not changing our policy to end financing of the manufacture of these military style firearms,” said Finucane, who emphasized the policy change was on a go-forward basis.

BofA had committed to the Remington deal before they began jumping for Hogg, but now may be heeding his wishes with their “go-forward” plans:

The banks have committed to providing the credit, and when Remington exits bankruptcy the credit facility will be established to replace an existing facility of the same size that Remington used to get through its Chapter 11.

The letter also indicated Bank of America may be preparing to exit the Remington credit facility soon after it is financed by selling its participation, as the agreement allows.

“Remington is aware of the policy that we subsequently announced, and that policy will dictate our future actions after the bankruptcy proceedings conclude,” said Finucane’s letter.

Imagine owning stock in a company whose board danced for a teenager’s tweets. A traumatized teenager who was being used as a puppet by left wing activists because they have no shame whatsoever, no less.

Now imagine that said activists are opposed to free speech, the Second Amendment, due process and a host of other bedrock American freedoms.

Things are becoming uncomfortably dystopian in the United States but, thankfully, we aren’t at the nightmare stage.