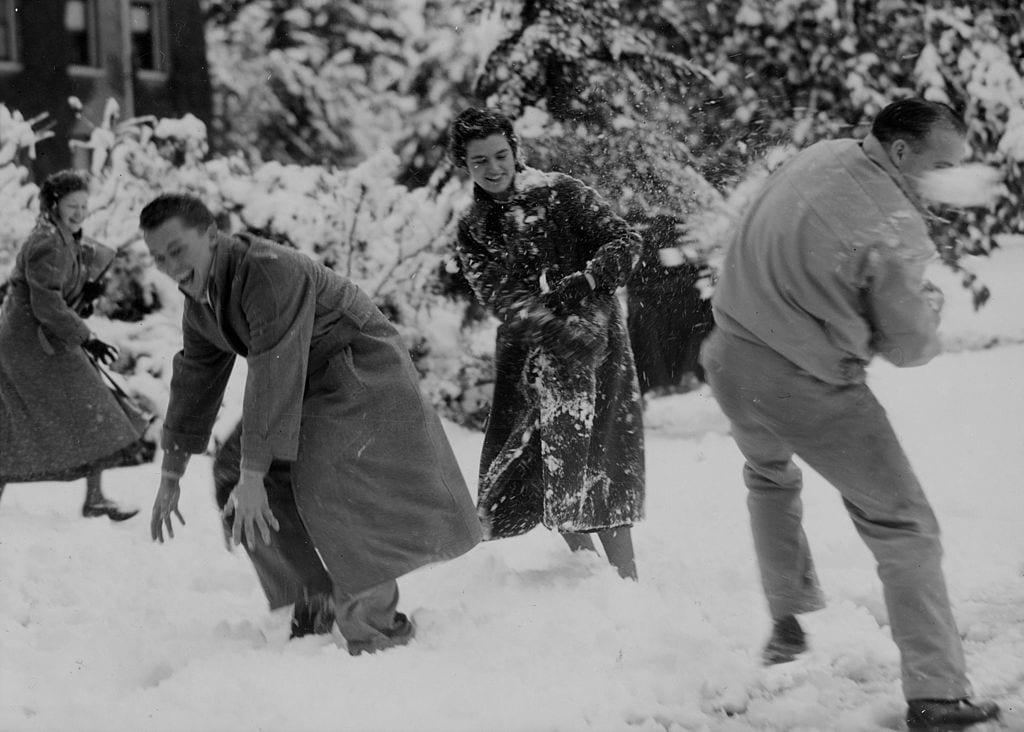 As Cole Porter slyly reminds us: “In olden days a glimpse of stocking/Was looked on as something shocking/Now heaven knows/Anything goes…”

Well, you know: depending on the state of Puritan politics at a given moment. The Puritan habit of scolding, and gazing sourly, on others for Improper Behavior is a human constant. And not just among long-faced conservatives, I beg to point out.

Let us contemplate — if we have to, and I guess we do — the current attempt to deplore a non-Porter song written before most living Americans were born, having fun with a guy’s attempt to coax a girlfriend into staying put amid the warmth of his apartment. The song, of course, is Frank Loesser’s rollicking duet, “Baby, It’s Cold Outside,” written in 1944 as a Hollywood party act for Loesser and his wife; subsequently made famous, and Academy Awarded, in the movie Neptune’s Daughter. The song is a hoot: “I really can’t stay (But baby it’s cold outside)… My mother will start to worry (Beautiful, what’s your hurry)/My father will be pacing the floor (Listen to the fireplace roar)… But maybe just a half drink more…” And so on. No wonder we’ve been listening to it ever since Truman was president.

But wipe that smile from your face. Various “woke” folk launched an initially successful movement to ban “Baby” from the airwaves: their idea being, the song covers up bad male behavior, including date rape.

Sixty-nine years! It took us that long to see the demoralizing effects of Frank Loesser’s wordplay, which to a station host in Cleveland seems “manipulative and wrong.” The head of the Cleveland Rape Crisis Center declared solemnly, “We have to stop promoting media that normalizes rape.” There was more of the same stuff elsewhere. It became politically chic to pull “Baby” from the airwaves. Until listeners caught on to what was afoot and poured out their unfrozen indignation on the offending stations, an indeterminate number of whom restored “Baby” to the playlist.

There are obviously larger things in the world to worry about than the December playlist for San Francisco’s 96.5 KOIT. But the opportunity is at hand, and should be seized, to note how often, and damagingly, simple-minded overreaction substitutes for these days rational thought and moral posturing takes the place of argument.

Puritans of the right and the left (and there are plenty on the left, believe me) don’t care for subtlety or nuance. No time for it! Throw “Baby” out with the bathwater! For variances in human viewpoint and disposition, Puritans have no tolerance: the world they see is the world that is.

Ain’t education wonderful? Better than education of the scholastic sort, it seems to me, is the informal schooling we used to get from engaged, intact families with well-developed norms; maybe a little of “Don’t you do that,” but just as often (and more to the point), “Here’s why you shouldn’t.” Or should, as the case might be. There was rational connection. Moral understanding pointed to generally recognized, generally recommended moral actions.

The moral understanding in “Baby” is that a morally educated girl has to watch out, and will. But life in the Truman era wasn’t a Stalinist indoctrination class. You could laugh and smile and yearn — man or woman — within the rule system, enjoying the richness of life. That privilege, seemingly, gets rarer and rarer as the Puritans and control freaks of the left shake scandalized forefingers.

Dumb? Put-upon? The women of pre-Weinstein times? They were smart in that most of them, most of the time, knew what was what and what to do about it — to the wonder of whoopee-wide-open modern folk.

Few, I trust, depreciate the awfulness of date-rape. But “Baby It’s Cold Outside” doesn’t celebrate violence and brutality. It celebrates the rituals of moral understanding that keep brutality at bay. It celebrates normal, everyday human relationships, carried on with devotion, decency, and, not least, a sense of humor.

Boy, they don’t write ’em that way anymore, do they?