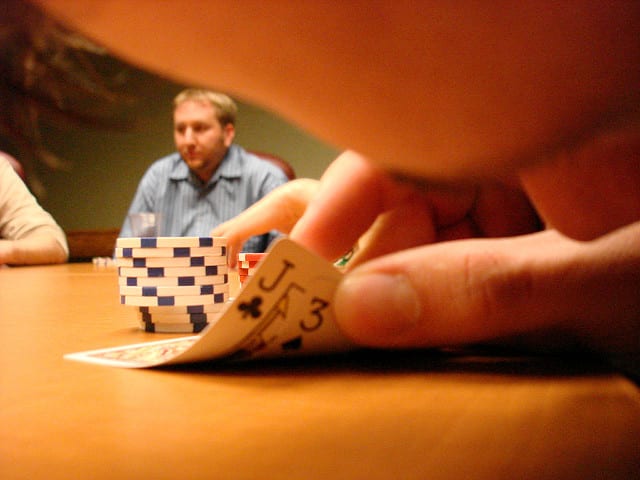 The end stages of both single and multi-table poker tournaments are a matter of walking the tightrope. The blinds are so high relative to the size of most players’ stacks that one wrong move can cause a player to bust out. Caution is king.

Since we know that most players are going to be careful for fear of being eliminated before they capture part of the prize pool, you can take advantage by playing power poker. Raise frequently and attempt to take the blinds and antes. If this tactic is working then you should generally avoid coin-flip type situations when someone reraises you.

I recall one tournament in which we got down to the final table, but only six players would be paid. So when the field was reduced to nine players and it took only three knockouts to reach the money play predictably tightened up. I had been playing relatively tightly prior to this, but I knew the opportunity had come to build my chip stack so I began to open up and raise more often with the types of hands I was previously folding. No one was calling me and I kept adding to my stack. Because of this, I was more than willing to avoid any dangerous situations.

Then one occurred. In this hand, we were down to eight players and I had about 60,000 in chips when Ken, a fairly solid player, raised the 8,000 big blind to 16,000 from just to the left of the big blind (or “under the gun” as hold’em players like to say). I held pocket nines, which was either far behind Ken’s hand (if he held a pair of tens or higher) or in a coin-flip situation (if he had A-K or its close kin). Because Ken was in early position — with several players yet to act behind him — and a fairly tight player, I knew he held a strong hand.

I could call off a quarter of my stack, catch a flop, and see what Ken would do then, but it just wasn’t worth the risk.

There was no sense in risking a large portion of my stack when my tactic of raising the blinds was working. You only want to take these kinds of gambles when you are short stacked or if the rest of the table is playing very aggressively and you can’t steal blinds. If people are bowing down to your aggression, just fold when someone else puts the heat on you. It’s just not worth the risk.

The caveat is you must get a read on your opponents. If you think they sense you’re using this strategy then you may have to start taking gambles because otherwise they’ll run over you by constantly reraising your wagers.

Notice that in my situation I could have called Ken’s raise and folded on the flop if I felt I was beat, but that would have left me with 44,000 in chips, meaning that any time I raised the big blind I would virtually be pot committed. This loss in chips would have dramatically affected my ability to use this strategy.