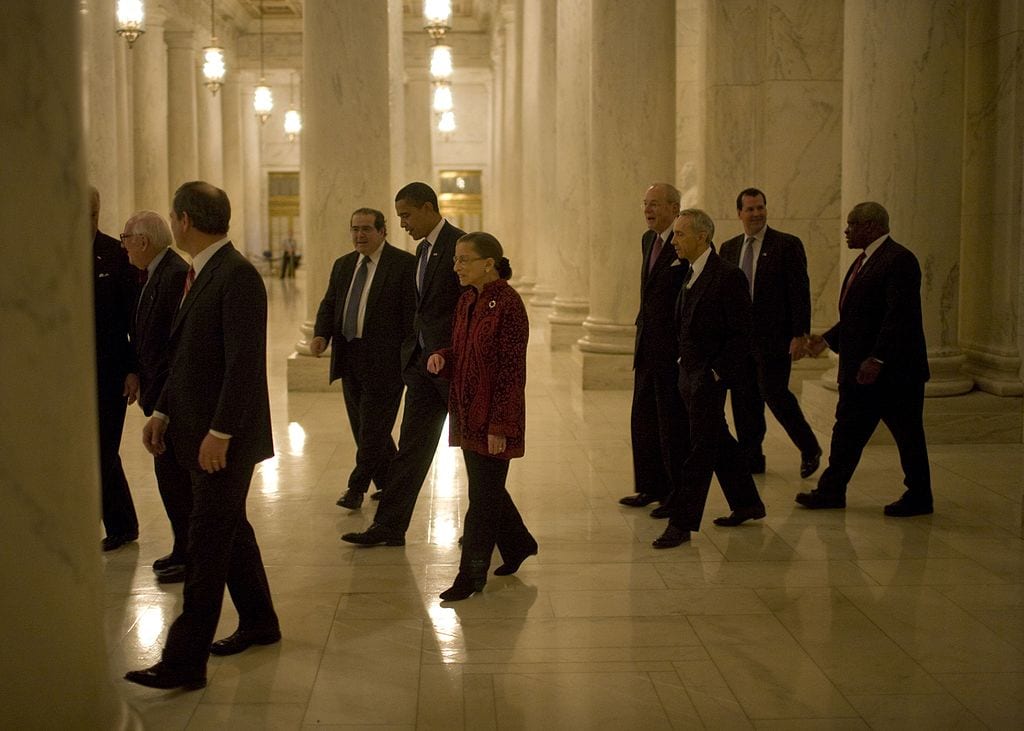 “Liar,” “wacko,” “immoralist” — the reproaches Donald Trump endures, or rejoices in, are numberless. And let’s not forget “authoritarian,” an echo of leading political players stretching back to Julius Caesar.

The political point here is in fact larger by considerable magnitudes than the personal heft of Anthony Kennedy, generally acknowledged as the court’s swing man on critical issues such as same-sex marriage and abortion. The court has long — possibly always — had swing men, capable by their reasoning and insistence on steering the high court in one direction or another, crucial to public policy and the governance of the country.

Is it too much to say that that the real authoritarian threat to civic peace and good government comes not from the Oval Office but from the Grecian temple where the United States Supreme Court regularly gathers so as regularly to tell us how the cow ate the cabbage?

Warnings against the high court’s assumed power to lay down the meaning of the Constitution date back at least to Jefferson, who called the federal judiciary “the subtle corps of sappers and miners constantly working under ground to undermine the foundations of our confederated fabric… they sculk (sic) from responsibility to public opinion… An opinion is huddled up in conclave, perhaps by a majority of one (italics mine)… A judiciary independent of a king or executive alone, is a good thing; but independence of the will of the nation is a solecism, at least in a republican government.”

The more it changes, according to M. Alphonse Kerr, the French journalist, the more it is the same! — with admirers and critics of Mr. Justice Kennedy contending for the Supreme Court seat currently seen as instrumental in determining whether this whole grand, glorious republic drifts left or right.

The Supreme Court does today, as it just about always has, pretty much what it wants to do — through the solemn assumption of principle and duties that may agree with the public’s sense of thing. Or may not. Tough for the public, in the latter case.

Formal constitutional checks on the justices — impeachment and removal, reduction of salary, change of jurisdiction — don’t work in practice and are never these days invoked. Constitutional amendment works, technically, but the job is arduous, involving the consent of the states. As a university debater, I argued the pros and cons of giving Congress power to reverse Supreme Court decisions. The longer these debates went on, the nuttier the idea appeared. We were going to give Congress supreme power in American affairs? Ho, ho, ho. And that was before Harry Reid, Nancy Pelosi, and Rand Paul.

The Kennedy seat on the Supreme Court is a major factor in our national destiny on account of the bad habit we got into, long ago, of deferring to the idiotic proposition, “The Supreme Court says…”

Supreme Court authoritarianism leads us to believe seven justices were qualified in 1973 to overrule the judgment of nearly all the states that abortion should be limited or prohibited. This the seven did by hocus pocus. It appeared to them that the Constitution conferred a national right no one had noticed before — the right to sexual privacy. Later it appeared, on Kennedy’s say-so, that the Constitution disallowed judgments by elected legislators on the sexual architecture of marriage.

The likelier supposition, in both cases, was that the people rather than the courts should be allowed to decide. Ah, no: not as the court, on both occasions saw it, to continuing controversy and excitement.

“Authoritarian” is a fair word to use concerning public figures who take on themselves the job of telling a free people what they should like and do. The challenge is to look around and notice that not all our modern Caesars have yellow hair and overactive thumbs.