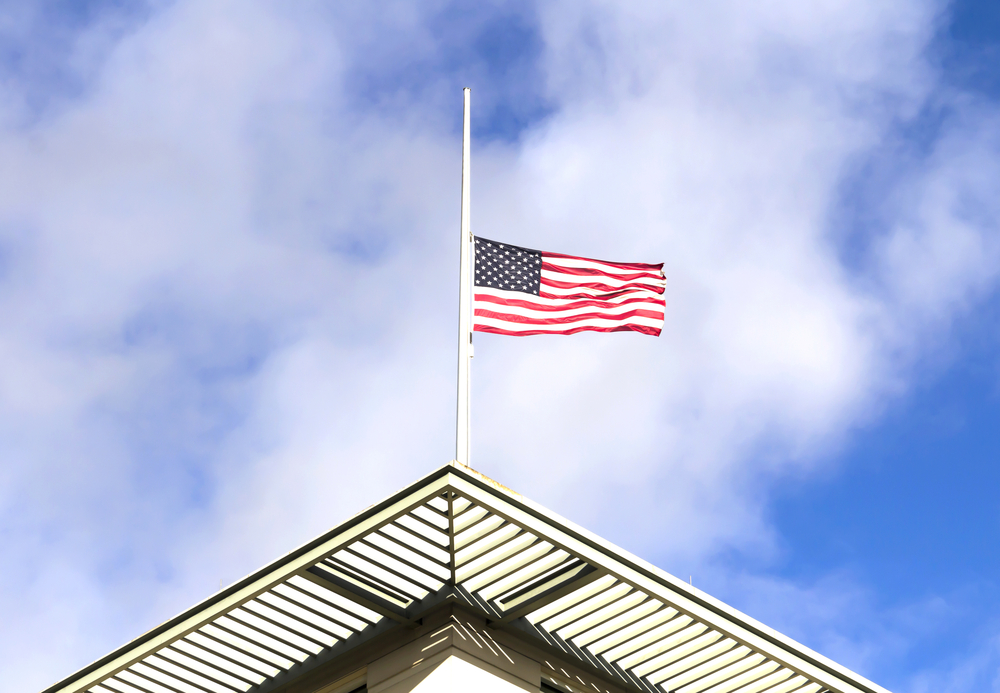 Back in my days as a Wheaton prof, I used a book of informal fallacies (those lacking mathematical precision) in my introduction to logic. As I recall, it listed 100 of these cheesy shortcuts. I was familiar with the classics (e.g., ad hominem, false dichotomy, and question-begging), but until reading this book I’d never heard of “ceremony” as a slick way to advance a narrative. Still, the point was obvious: You don’t have to use words to bulldoze your cause over the reservations or objections of others. You can simply put on a show in an effort to validate your conceits. Of course, many ceremonies are honorable, but others are specious, even pernicious, like putting lipstick on a pig, or worse, a viper.

This brings me to the flags flying at half-staff in front of the public library yesterday. So who died? Inside, the staff told me that here in middle Tennessee, we were publicly grieving, under a presidential directive, for the eight who were recently murdered in Atlanta-area massage parlors.

Well, certainly, the eight killings were vile and horrific, but I don’t recall flag-trimming in Nashville when eight were murdered in Chicago over last year’s Christmas weekend. So why was this surpassingly special? And, to risk being counted churlish, as you always do on such matters, why was Brian Sicknick (a wonderful man by all accounts) only the fifth person “lain in honor” (as distinct from “in state”) in the Capitol rotunda? The other four were Billy Graham, Rosa Parks, and two Capitol guards shot to death on duty by a paranoid schizophrenic in 1998. On the list, we don’t see Sgt. Alvin York, Mercury/Gemini/Apollo astronaut “Gus” Grissom, Helen Keller, Walt Disney, Henry Ford, or Babe Ruth. Of course, the guards were a special case, but the first two were murdered. Not Sicknick.

The answer, of course, is the ceremonial narrative, the reason those slain in Lori Lightfoot’s Chicago won’t make it to the rotunda. In Sicknick’s case, the point was to demean and demonize outgoing President Trump and his supporters, advancing an impeachment agenda. As for the Atlanta killings, the alleged motive was racism, a charge deployed familiarly as a universal solvent to wash away rational and civil discourse.

Earlier in the morning, I’d read in Daniel J. Flynn’s Spectator A.M. newsletter that, in recent days, the New York Times and the Washington Post ran, respectively, nine and 16 separate stories construing the shootings as racially motivated against Asians. And anyone with a television can tell you that it’s been wall-to-wall preoccupation with hashtag #StopAsianHate.

The shooter, Robert Aaron Long, says that he acted viciously to eliminate a sexual temptation that had been plaguing him. Maybe so. Maybe not. Perhaps it was hatred of Asians after all. Maybe he’d been talking to a friend who lost his grandpa in Vietnam. Or maybe he’s like some folks I’ve read about in Indonesia and Peru who resent the business success of Asian immigrants. But I haven’t heard this. I have read that he’d checked in to a treatment center for those who were miserable over enslavement to illicit sexual desire. And I’ve read that the police had a couple of those parlors on their prostitution radar. Maybe Long had compromised himself at one of these establishments, and his rage at this “snare” would have erupted even if masseuses had been predominantly, say, Anglo or Russian.

As I consider the possibilities, I think back to two events from my time teaching at Wheaton College (and no, they didn’t involve violence). The first occurred in the late ’70s during a panel discussion on Christian rock, with Larry Norman and Randy Stonehill pitching in. The group concluded that the words and not the music were the issue. But then a student rose to say he didn’t judge us for attending that night’s concert, but that he wouldn’t be there. It was too painful for him in that rock ’n’ roll had been the soundtrack of his misspent youth. When his life was turned around, he tossed his records into a burn barrel.

If Long is telling the truth, then he was attempting a bloody, evil, and arguably insane version of the same — trashing people instead of objects. Maybe he laid the bulk of the blame on the victims, holding them accountable for his failings. Maybe he was simply judging himself to be helpless trash and needing to free himself from the torment he’d countenanced. Whatever it was, the act was loathsome and inexcusable.

Much is being made of Long’s conservative Christian background with its “purity culture.” Sure enough, if you think sex outside of marriage is illicit, the tension can be real, as is the emotional distress when one gives in to something the Bible proscribes. But on the whole, those who find no conflict at all between decency and fornication (whether real or pornographically imagined) are arguably a greater threat to society than those who couldn’t care less.

Be that as it may, there is insufficient evidence to cast this as a peculiarly anti-Asian grievance and to advance this narrative with the power of the presidency.

It’s quite a sobering thing to see a flag flying at half-mast. Even more sobering is the abuse of this noble ceremony to insinuate, and indeed shout, a half-baked claim if not an outright lie. A fallacy indeed.