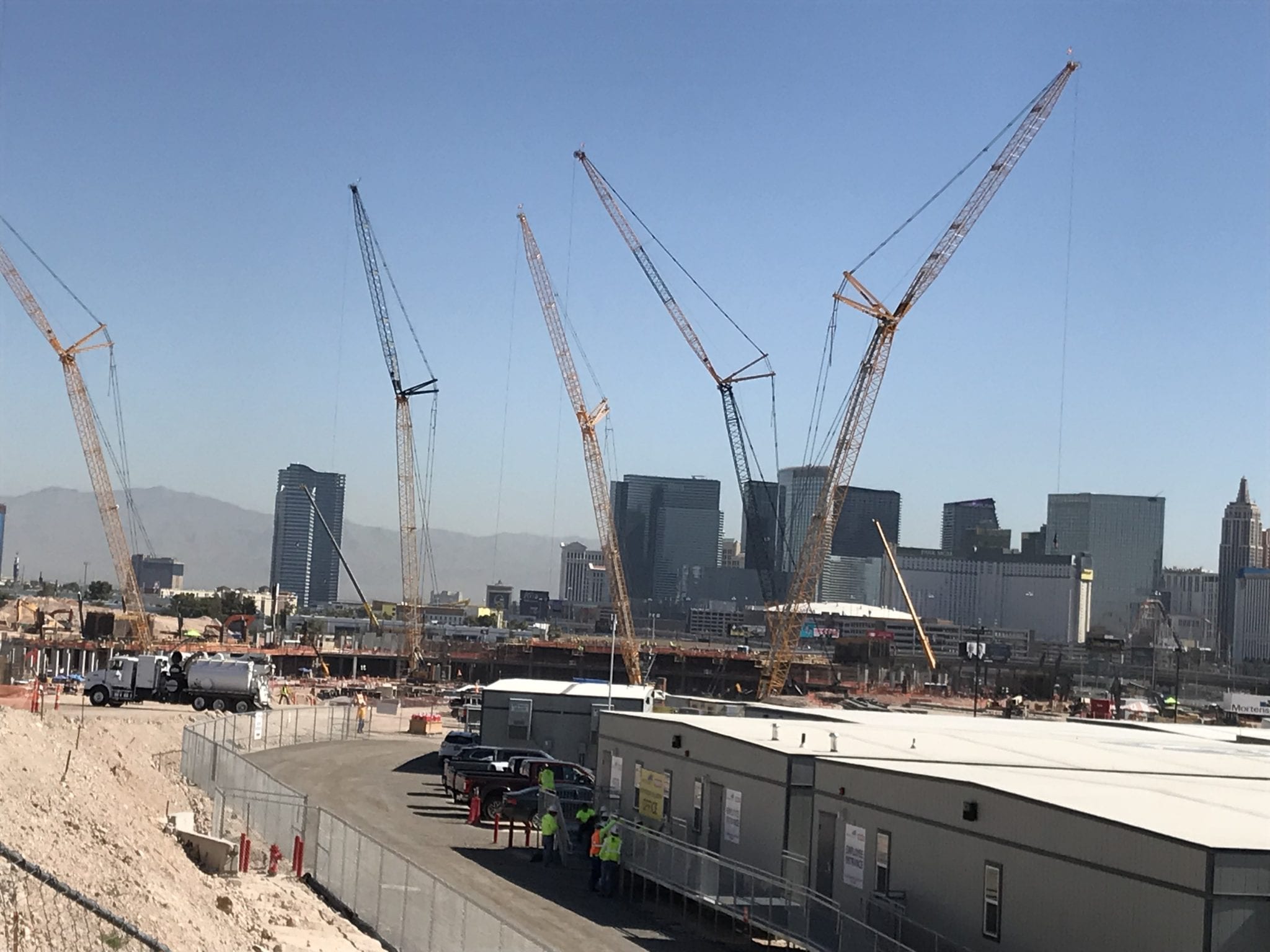 Some of the initial Raiders fervor has died down.

A Rio All-Suites Hotel & Casino gift shop that last summer sold more gear for the future NFL team than the city’s current NHL team, the Golden Knights, says that script has flipped — after the expansion hockey team’s surprising run to the Stanley Cup finals in its first year.  That same store says that shirts and hats for the Golden Knights are now in demand, showing how fickle sports fans can be.

In fact, Raiders gear is now relegated to a back corner of the gift shop, with Golden Knights paraphernalia in the front.

But down the Strip, at the corner or Russell Road and Dean Martin Drive, what was just a patch of debris-littered desert last summer is now bustling with activity. Dozens of trailers in one corner serve as offices and places of respite from the 110-plus degree heat, while cranes in the distance lift heavy pieces of steel that will form the shell of Las Vegas Stadium. A tower painted with the Raiders logo supplies water to the site, while several cement trucks wait to pour in one corner, their mixer drums spinning.

“There will be no expense spared in building it, and we want it to be something that everybody here is proud of,” he said. “It will be a symbol for the world to look at and represent Las Vegas.”

Those are easy words for Davis to speak given that taxpayers will foot much of the bill — nearly as much as the Raiders themselves. The estimated $1.8 billion facility will get $750 million from the public paid for by a 0.88-percent lodging tax increase on hotels in the area. The Raiders, who will move to Las Vegas from Oakland in 2020, will fund $850 million and an NFL loan will provide the remaining $200 million.

The Weekly pointed out that critics said the money would be better spent on the education system, which ranks near the bottom of the nation in many metrics.

“Once they see all of what the Raiders organization does — we’re bringing a small army down here — I think they’ll see we’re more than just a football team,” Davis responded.

The Las Vegas Review Journal recently reported the Raiders had spent nearly one-fifth of their commitment — about $172 million — while another one-fifth of the NFL commitment of $44 million had been spent. Almost $31 million of the taxpayer funds has been used. The deal the Raiders signed committed the team to putting some of its money into the project first.

Statistics from the Las Vegas Convention and Visitors Authority (LVCVA) show that the lodging tax doesn’t seem to have hurt tourism yet. While the cost of rooms has gone up, the number of visitors has also seen a slight uptick — but a strong economy may also have something to do with that increase.

The lodging tax was expected to increase the average cost of a room on the Strip by $1.50 per night, although the cost of rooms can greatly fluctuate depending on the marketing techniques of the various casinos. LVCVA numbers show that the average daily room rate increased by 4.4 percent in April 2018 compared to April 2017 and 7.4 percent in May 2018 compared to May 2017, but visitor volume during those same periods increased 0.1 percent and 0.8 percent, respectively. Las Vegas saw 3.63 million visitors this May.

Parking continues to be a point of contention, with a solid plan due to the county by September.

That issue has been perhaps the trickiest portion of the deal, as the 62-acre site of the stadium only has room for about 2,400 parking spaces. That’s only 15 percent of the 16,250 parking spots required by Clark County code for a 65,000-seat stadium.

Discussions continue about usage of the Bali Hai Golf Club south of Mandalay Bay on the Strip, which would have room for the vast majority of those 16,250 spaces. That site, once considered a frontrunner for the actual stadium, is tied up in a tax dispute between local and federal authorities.

Clark County received that land from the Federal Bureau of Land Management in 1998 and leased some of it to developer and professional sports gambler Billy Walters for the golf course. But Walters didn’t have to pay rent on the land initially because the course didn’t turn a profit. An amended contract in 2011 requires Walters to pay $100,000 annually to lease the land. Now, a federal lawsuit against Clark County demands $75 million in past and future underpaid rent on that site.

Walters is now in prison, serving a five-year sentence for an insider trading scheme, requiring negotiations to go through his representatives.

“I don’t know if it’s the exclusive option. It’s clearly a great option. I think it’s been a great option all along. With the proximity to the stadium site, it would be an ideal site,” Clark County Commissioner Steve Sisolak said earlier this year. “It’s a complicated issue because of the BLM dealings and Mr. Walters’ lease. We’ve got a lot of moving parts in that one.”

Surrounding infrastructure will also get a taxpayer boost due to the stadium construction. Transportation officials have fast-tracked two direct-access, $32 million off-ramps to connect a new carpool lane on Interstate 15 to Hacienda and Harmon avenues. Originally to be constructed between 2020 and 2035 — there’s government efficiency for you — these will now be started immediately to help relieve traffic congestion near the stadium.

A 2016 report recommended nearly $900 million in road improvements receive greater urgency due to the stadium construction.

This is some of what Nevada Policy Research Institute spokesman Michael Schaus forewarned when he said he expected the city and county to “bend over backwards to make sure the Raiders have what they need to accommodate their fans.”

Las Vegas Stadium, which will also host home games for the University of Nevada-Las Vegas, should be ready for the 2020 season. The site will soon be home to some two dozen cranes capable of reaching 600 feet in the sky as construction efforts ramp-up to a July 2020 deadline. It will be curious to see how high the costs rise for taxpayers as local officials green-light publicly funded projects to aid in that venture.

From a distance, the construction of the new stadium may seem like a desert mirage, but to taxpayers, the stadium and the cost are all too real.  Even if the interest in the Raiders fades, taxpayers will still be paying to build a stadium for an NFL owner worth $500 million.