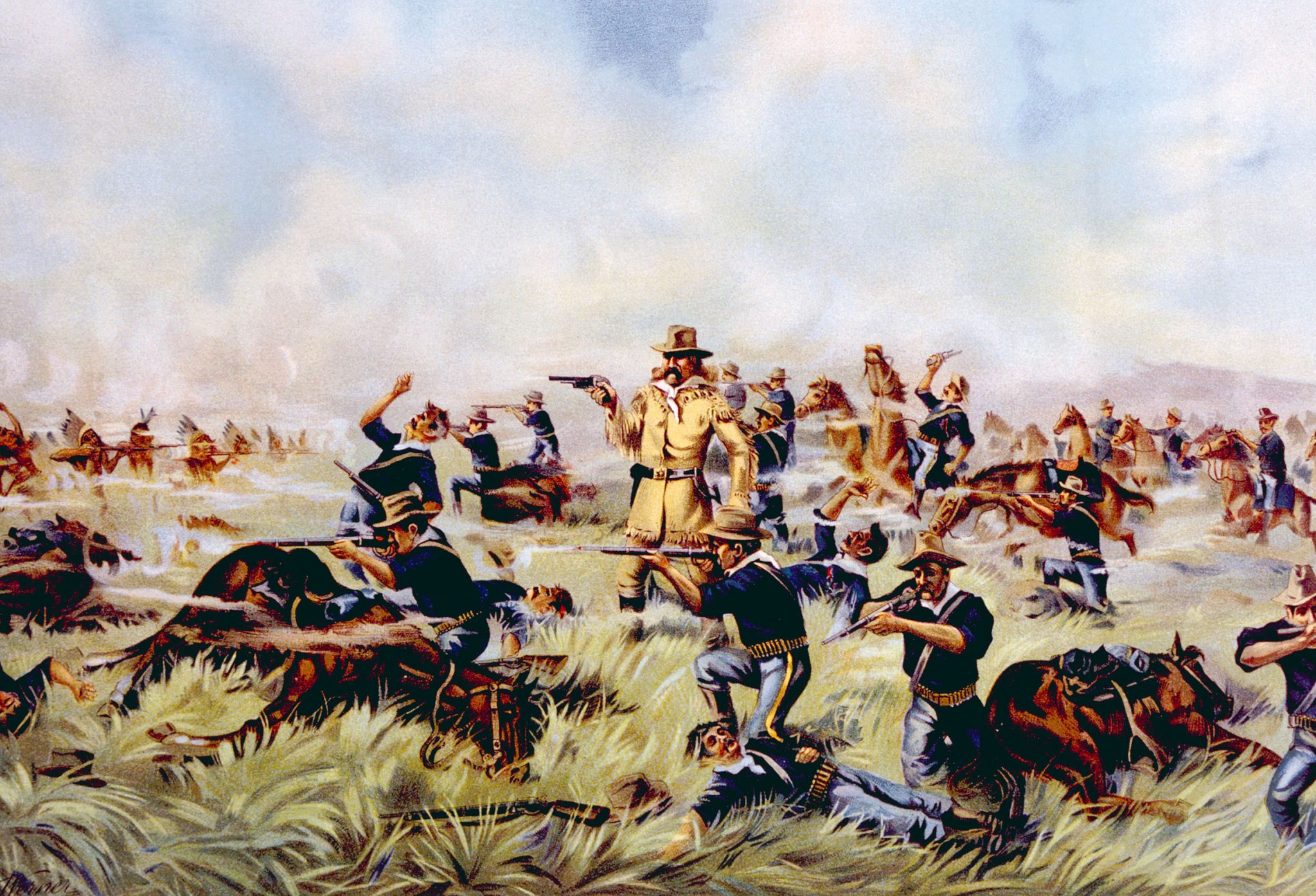 As the world’s foremost Westernologist — okay, the only “Westernologist” ’til the word catches on — I’ve long written that the liberal-orchestrated diminution of the Western genre has had an intentional, deleterious effect on American manhood and, by extension, boyhood. This has made it easier for liberals to turn the once real-life Otters and Blutos of academia into snowflake simps, whimpering at even the announcement of a conservative speaker. Hollywoke has fully embraced the new abnormal, and though literature has been moving toward similar demasculinization, one publisher, Regnery, remains the Fort Apache on the bleak manscape for traditionalist readers. Their recent title, Armstrong Rides Again!, by H. W. Crocker III, resurrects the most colorful Western figure of all time, George Armstrong Custer, in a rollicking yet insightful adventure novel with a bravado premise — surviving the most famous Western massacre ever, the Battle of the Little Big Horn.

Armstrong Rides Again is the second book (after 2018’s Armstrong) in Crocker’s breezy “Custer of the West” series. Keeping both his survival and identity a secret, Custer — now just Armstrong — carries the same flamboyant, egocentric persona that led him to historical disaster into further exploits, only these a lot more entertaining than his “last stand.” In the new installment, Armstrong and his three memorable companions from the first book — Catholic Indian scout Billy Jack (a superb character), resourceful femme fatale Rachel, and formidable German Shepherd Bad Boy — encounter the enigmatic author Ambrose Bierce (The Devil’s Dictionary, An Occurrence at Owl Creek Bridge) and wind up in the middle of a Latin American revolution.

The wild plot gives little hint of Crocker’s impressive achievement: maintaining an authentic formal 19th-century writing style (“alcohol I have foresworn”) — through the device of Armstrong’s letter to his wife, Libbie — while describing fantastic, often funny escapades. What begins as an engrossing Larry McMurtry–esque Western episode expertly segues into a George MacDonald Fraser–style swashbuckler, but with no reduction of excitement or Armstrong’s pompous yet chivalric persona.

In the realistically unwoke early portion of the novel, Armstrong gets the drop on a thieving Buffalo Soldier deserter and calls him “darky” — as a former Union general who fought to liberate slaves would. The deserter’s speech is also politically incorrect. “Why do Indians love torturin’ people?” he ponders. “It ain’t natural.” Despite this, when Armstrong finds a man tortured to death by Indians, it soon proves the result of a primitive code of honor and not an arbitrary cruelty.

Armstrong and team meet, first, a mysterious aristocratic Latin beauty aboard a California-bound train, then Ambrose Bierce in San Francisco. Crocker recreates Bierce as the 19th-century Hemingway he may have been, brilliant and cynical (“War is God’s way of teaching Americans geography.”) Armstrong agrees to fight on the lady’s side as an officer and a gentleman for the president of Neustraguano, El Caudillo, against pre-Marxist rebels. He and rival Bierce play cat and mouse all the way to Neustraguano, an island off the Pacific coast of Mexico, as Armstrong foils all Bierce’s ploys to keep him away.

It is in the Neustraguano section that the novel rises to a lofty political height. Riding toward the capital, Armstrong’s party enters a village whose entire population has been butchered and dismembered by rebels. With progressive logic, the Minister of State, Rodriguez, blames El Caudillo rather than its perpetrators for the slaughter, saying the rebels were provoked by his intransigence. Billy Jack states the anti-progressive basic truth: “Responsibility lies with murderers.”

At this point, all seriousness ends and is replaced with breakneck fun and deft satire. Armstrong meets El Caudillo, who turns out to be a delightful Trumpian figure trying to make Neustraguano great with cultural and agricultural improvements, despite opposition from his own ministers, the newspapers, and an abrasive feminist nativist who champions Indian barbarism over Western cultivation. In his hilarious yet astute salutary speech, El Caudillo laments the rebel Indian custom of wearing nose bones and shrinking heads:

I thought we should stamp it out as barbaric, but my councilors tell me that we should apologize to the Indians, because if our plantations hadn’t crowded them out, they wouldn’t be raiding, decapitating people, and shrinking their heads; they’d just be shrinking each other’s heads…. Personally, I want a country where we don’t apologize for replacing headhunting with farming.

Trump couldn’t have said it better himself.

Armstrong Rides Again provides more than smart masculine conflict and political metaphor. It delivers the most expertly rendered combat sequences outside of Bernard Cornwell. In a vivid sequence, Armstrong’s troops, including Bierce and Billy Jack, with dog Bad Boy trotting alongside, ride off before dawn to liberate a town from the rebels — almost like old times for Armstrong Custer. It’s the sort of lovely, manly scene seldom written anymore, and never filmed.

Right before the final battle, Armstrong delivers an inspirational speech to his men that rings true to our day: “The rebels know that a people without pride in their nation’s past, without a reverence for their nation’s heroes, without a passion for their nation’s Church, will be a people deprived of any spirit of resistance to the tyranny.” The battle itself takes place against overwhelming odds, near a spewing volcano, with a golden bell clanging and a prototype ironclad submarine approaching.

El Caudillo’s post-victory statement to Armstrong will make conservative readers and MAGA types smile, if a trifle wistfully: “I just came to congratulate you on your really great job, and my job of appointing you.” Maybe Crocker’s excellent book won’t be the only story with an upbeat sequel.