Amidst the latest email turmoil inside the Democratic National Committee, another scandal of sorts has emerged. Democrats don’t have any growth message. None. My friends at the American Enterprise Institute reported last week that the Democratic platform is silent on “economic growth.” Every poll shows that the economy and jobs are the voters’ top two priorities, yet growth somehow isn’t a priority for the Democrats. The Washington Post reports that the marching orders for the Democrats in Philadelphia is to be upbeat on the economy and the country.

But that’s clearly a hard sell because during the past eight years under Obama we have had less than 2 percent growth in GDP and no growth in wages and salaries, while poverty rates have barely budged. More than 94 million Americans over the age of 16 are outside the labor force. How do you put lipstick on that pig?

Perhaps one reason the Democratic party platform is silent on economic growth is that for modern left, growth isn’t what we should aspire to. Instead, they want redistribution of wealth. 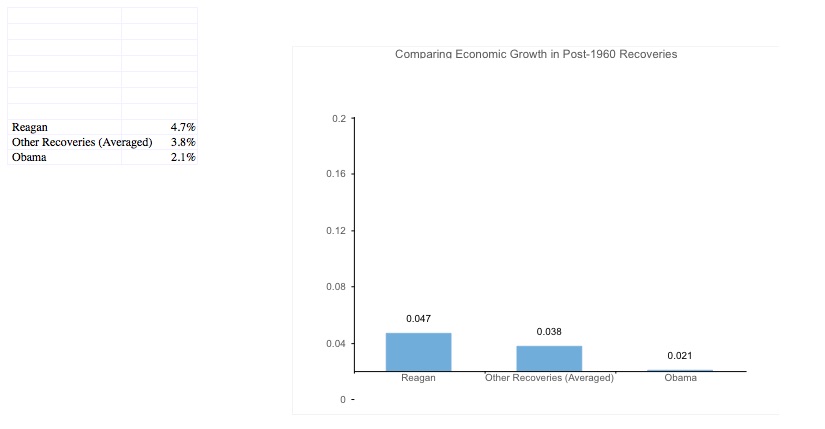 If you’re not for growth, you probably aren’t going to produce it, just as if you’re not even trying to get in shape, it’s a good bet you’re not going to shed those extra 16 pounds.

Amazingly, the last great growth hawk of the Democratic Party of modern times, John F. Kennedy, ran against Republican Richard Nixon in 1960 on the issue of the “growth deficit.” The economy in the 1950s was fairly prosperous and much more so than over the last eight years. But JFK said we can “do bettah” and convinced Americans we could see much faster wage gains with greater opportunities.

We are witnessing an austerity-worship within the Democratic Party. Growth is undesirable because it might make the rich richer. Employers are exploiters in the “you didn’t build that” mindset.

Radical environmentalists, a bedrock of the party, are anti-growth and believe that when people get richer, it’s worse for the planet. (They should go live in India or Mexico City and see how well the environment is doing there.) They ridicule what they call “growth-mania” on the right. Human economic activity, they warn, is causing catastrophic global warming.

Perhaps this explains the litany of economic failures during the Obama years. We have had $8 trillion of new debt, minimum wage increases, Obamacare, an $800 billion stimulus plan with “shovel-ready” projects, tax increases on the rich, more than $100 billion in green energy subsidies, auto company and union pension bailouts, re-regulation of the financial industry and banks, and a Fed that has manufactured near zero short term interest rates for seven years with up to $4 trillion of bond acquisitions. ‎All of these were designed primarily to redistribute income, and so is it a shock that they haven’t produced growth?

Here’s a question that Donald Trump and Mike Pence should be asking every day: what would Hillary offer that is any different? She is promising minimum wage increases, tax hikes on the rich, and more infrastructure spending. This is new? This is change?

The left’s defense of growth anemia is that 2 percent growth is the new normal, so get used to it. The Democrats are trying to sell “Morning in America” rhetoric at a time when two-thirds of voters think the country is on the wrong track. Donald Trump’s convention speech in Cleveland is being attacked by Democrats as dark and dreary. But maybe he was just being realistic about the direction of the country.

I’ve been attacked of late for suggesting that we could easily achieve 4 percent growth for the next five years with a change of economic policy and personnel. But it really isn’t that hard to super-charge the economy. A pro-America energy production policy, including putting coal back in business, could produce $150 billion more output each year. Another percentage ‎point of growth could come from tax reform with reductions in business taxes to spur investment and hiring, according to the folks at the Tax Foundation.

But if Democrats are content with 2 percent growth, and want to celebrate that as an achievement, then this is the best we will get from them. The party that once stood for growth for the working class now says Americans have to work more and settle for less. ‎Now there is a message that’s dark and dreary.