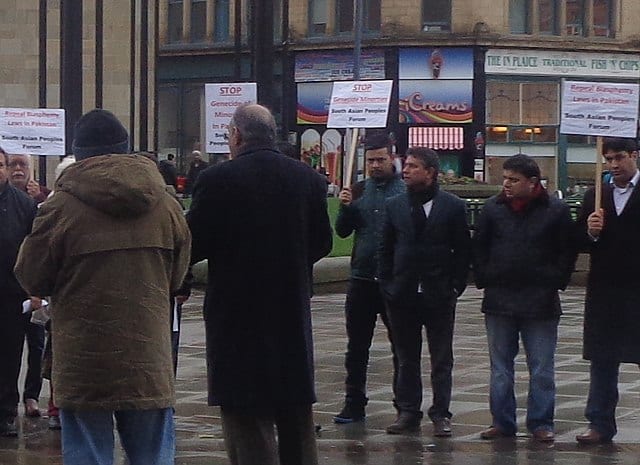 The profane long has coexisted with the sacred. During earlier ages the secular authorities often sought to protect established faiths by punishing blasphemy. Even where organized religion is dying, the rule sometimes lives on. In October, Ireland will vote on whether to eliminate a clause banning blasphemy from its constitution.

The provision, and the corresponding criminal law, have not been enforced for years. But they are not without support. Five years ago the Catholic Order of the Knights of Saint Columbanus and Islamic Cultural Center both argued for retention of the measure at a constitutional convention. But almost certainly the poll will doom even the theoretical possibility of blasphemy prosecutions.

However, as the Islamic Cultural Center’s support might suggest, similar prohibitions are alive, well, and badly abused throughout the Muslim world. Although prosecutions sometimes target Muslims, religious minorities and atheists are most at risk. In such nations as Egypt, Indonesia, Iran, and Pakistan, blasphemy laws have become a powerful tool of religious persecution and repression. Nor is the law the only risk faced by those accused of blasphemy. Mobs kill defendants and sometimes lawyers who defend them and the judges who acquit them.

Last year the U.S. Commission on International Religious Freedom published a study by Joelle Fiss and Jocelyn Getgen Kestenbaum entitled “Respecting Rights? Measuring the World’s Blasphemy Laws.” The report surveys laws “which penalize expression or acts deemed blasphemous, defamatory of religion, or contemptuous of religion or religious symbols, figures, or feelings.” The commissioners emphasized that “while it is legitimate to speak out against blasphemy, we believe that laws against blasphemy are detrimental to religious freedom.”

The United Nations Special Rapporteur on Freedom of Religion carefully made the same point, while attempting to avoid offending the UN’s many Muslim-majority members: “At the national level, blasphemy laws are counter-productive, since they may result in de facto censure of all inter-religious or belief and intra-religious or belief dialogue, debate and criticism, most of which could be constructive, healthy and needed. In addition, many blasphemy laws afford different levels of protection to different religions and have often proved to be applied in a discriminatory manner.”

The Fiss/Kestenbaum report explored in greater detail the challenges presented by anti-blasphemy laws. At the outset, such measures “position states as arbiters of truth and ultimate deciders of what is or is not offensive to the sacred, an assessment with inherent subjectivity.” Moreover, the laws are directed at protecting religious doctrines, not actual people, whether practitioners or critics. Indeed, blasphemy bans help insulate dominant faiths, or more accurately, the institutional structures and established leaders of dominant faiths, from even well-deserved scrutiny and criticism.

Those who defend these measures speak of preventing dissension, discrimination, and conflict, yet very rarely are the laws deployed by minorities against their oppressors, who represent the dominant culture, control state institutions, monopolize sources of power. Indeed, use of the law almost always exacerbates hostility toward and foments attacks on the most vulnerable in already volatile societies. Observed Fiss/Kestenbaum: “Allegations of blasphemy can serve as a pretext for religious extremists to polarize society and to foment hate and riots.” In Pakistan, for instance, those merely accused of the crime are lucky if they are not murdered on their way to jail.

These laws do more than result in individual injustice. They undermine the rule of law and essential protections of a liberal order. The USCIRF report detailed several widely accepted international law norms/principles which are violated by anti-blasphemy laws: freedom of opinion and expression; freedom of thought, conscience, and religion; legality (due to vagueness); proportionality of punishment; nondiscrimination and equality (bias against groups and privileges for state religions); protection of privacy (limiting forums in which individuals can express themselves); and hierarchy of the law (placing anti-blasphemy measures above other legal and constitutional provisions).

Bans on blasphemy are surprisingly widespread. An extraordinary 71 countries formally penalize the practice. A quarter each are from the Middle East/North Africa and Asia-Pacific. Almost as many come from Europe. About 16 percent are in Sub-Saharan Africa. And a bit more than a tenth come from the Americas.

All violate human rights principles and many buttress state religions. “Most blasphemy laws studied were vaguely worded, as many failed to specify intent as part of the violations.” Indeed, just one-third required mens rea, or intent to blaspheme. Very few limit the applicability to specific types of speech or forums. Unsurprisingly, the penalties prescribed tended to be “unduly harsh.”

The six highest scoring — and thus most contrary to international law on their own terms — were from Muslim states. Iran, Pakistan, Yemen, Somalia, Qatar, and Egypt topped the list. Then came Italy. Islamic-majority states dominated those which followed, though there were a smattering of European nations, along with Thailand, which privileges Buddhism. Ireland, set to vote on the issue in the fall, actually was at the back of the pack. The most important factors were severity of the penalty, discrimination against groups, and protection of state religions.

While the measures are widespread, enforcement varies dramatically. There are few prosecutions in the Caribbean and Europe, for instance. Thus, a blasphemer in Italy isn’t likely to suffer, irrespective of the law. That is not the case in the Muslim world, unfortunately. There the laws often are applied — and grossly abused. Fiss/Kestenbaum compared Italy and Egypt, which have the same formal score, and found that the two states are very different. Although Egypt’s General/President Abdel Fattah al-Sisi poses as a critic of religious extremism, “the situation is deteriorating and prosecutions are on the rise.” He appears to be using the law to win public support as the guardian of Islam after deposing the Muslim Brother’s Mohamed Morsi as president.

The Forum for Religious Freedom Europe recently published a small booklet entitled “Victims of Apostasy & Blasphemy” which presented faces and stories of those victimized by this form of intolerance. One of the most dramatic examples occurred in Indonesia, with the world’s largest, though once thought to be largely moderate, Muslim population. Last year, Basuki Tjahaja (Ahok) Purnama, the Christian governor of Jakarta, was sentenced to two years in jail on blasphemy charges which were almost certainly designed to derail his reelection.

Pakistanis, whose government enacted eight provisions punishing blasphemy, feature prominently. For instance, Asia Bibi, mother of five, was convicted in 2010 and sentenced to death. The illiterate berry picker was accused of blasphemy by Muslim women angry that she drank from the same water source. She appealed the sentence and has been in prison ever since. At least she is still alive. Between 1990 and 2011, more than fifty blasphemy defendants ended up dead in and out of jail.

Salman Taseer, the governor of Punjab, was assassinated in 2011 by his bodyguard for criticizing the law and urging that Bibi be pardoned. His murderer declared “this is the punishment for a blasphemer.” The killer was hailed for his crime, including by lawyers who clamored to represent him for free. Two months later Shahbaz Bhatti, a Christian and Minister for Minorities, was assassinated because he criticized both blasphemy laws and religious persecution.

Even those who enforce the law recognize that it is a tool of injustice. A Pakistani Supreme Court opinion in 2015 declared: “The majority of blasphemy cases are based on false accusations stemming from property issues or other personal or family vendettas rather than genuine instances of blasphemy and they inevitably lead to mob violence against the entire community.” Yet periodic promises of reform — not even repeal — have proved stillborn. No one is willing to face down Islamist protesters and killers, and those behind the mob who use the violence for their political gain.

Two years ago, Amnesty International published a detailed analysis of Pakistan’s brutal practices entitled “‘As Good as Dead’: The Impact of the Blasphemy Laws in Pakistan.” AI detailed how the measures “violate the rights to life, freedom of thought, conscience, and religion or belief, and freedom of opinion and expression.” Moreover, prosecutions rarely have anything to do with protecting sensitive feelings about religion. Rather, accusations can reflect “professional rivalry, personal or religious disputes, hostility towards religious minorities, and seeking economic gains such as money and land.” There are no protections against such shameless abuses.

Among the most outrageous cases are those filed against people with mental disabilities. Only occasionally do the courts note even obvious diminished capacity of the accused. For instance, a 14-year-old Christian girl was arrested and charged with desecrating the Quran. There was evidence that her accuser planted the supposed evidence. Moreover, the court noted her learning disability and the fact that “her mental age appears below her chronological age.” But none of that prevented her arrest; only an unusually courageous judge quashed the case.

AI goes on to document in depressing and excruciating detail how the dishonest and extremist alike have misused the laws for personal and political gain. Even prosecution of charges honestly brought threaten the most fundamental values of conscience, expression, liberty, and life itself. However unlikely, repeal is the only proper response. But even subjecting blasphemy prosecutions to normal legal and judicial protections would be a major advance. Pakistani authorities know that the charges are routinely abused. They have an obligation to end such manifest injustice.

And Western states should repeal their laws, even if unused. Ireland’s Mairead McGuinness, Vice President of the European Parliament, noted that “The problem when Europeans criticize the abusive blasphemy or apostasy laws in countries such as Indonesia, Pakistan, Sudan, or a host of others, the local authorities frequently accuse us of hypocrisy.”

The West should not give human rights abusers a convenient excuse to dismiss criticism.

Moreover, the U.S. and other Western states should routinely include religious liberty, including the anti-blasphemy laws, in their dialogue about human rights with repressive states. Although there is little Washington can do directly — threatening a religious war hardly seems appropriate — Americans and others of good will should protest, embarrass, and boycott persecuting states and their representatives. There is no more important liberty than to live out and express one’s religious faith. Murderous persecutors should not get a pass.

Doug Bandow
Follow Their Stories:
View More
Doug Bandow is a Senior Fellow at the Cato Institute.
Most Popular
1
The Right Prescription
The Roe Decision Won’t Save the Democrats
by David Catron