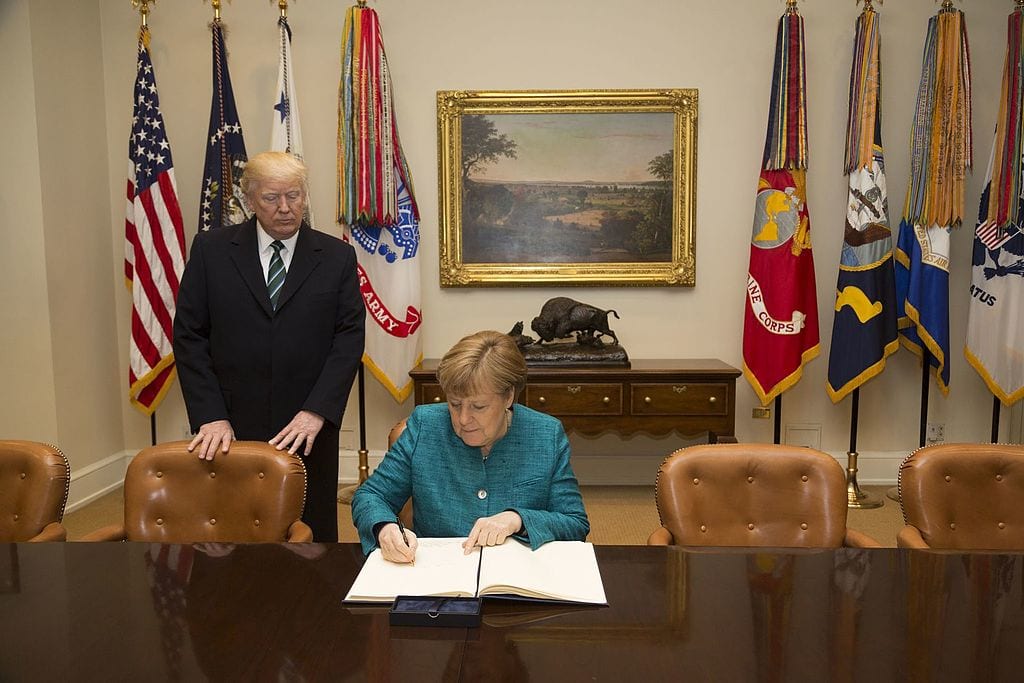 Since 2005, sitting atop Europe’s strongest economy, German Chancellor Angela Merkel has led her nation and the European Union. Upon the advent of President Trump’s term in office, the media quickly proclaimed her the new leader of the free world.

Mrs. Merkel’s power is not just derivative of Germany’s but also of her dedication to and support for the European Union, of which many member countries grant her near total support.

In 2008, Merkel was awarded the Charlemagne Prize, given each year by the German city of Aachen, Charlemagne’s ancient capital, to the person whose actions most greatly support European unity.

Charlemagne, in the Eighth and Ninth Century, conquered most of Europe, uniting it by force. He tried to expel the Muslims from Spain in the year 778 and was defeated. He later succeeded in reaching as far as Barcelona, but could not drive the Muslims from Europe.

Merkel is now in the political fight of her life, her chancellorship in jeopardy as a result of her immigration policies and their rejection in large parts of Germany and a growing number of EU members. For all her efforts to promote unity among European Union members, her immigration policy has made her the anti-Charlemagne.

This week, Merkel faces what could be her final political crisis, brought about by German and European rebellion against her open-door immigration policy. In 2015, when she proclaimed an open door to “Syrian” (really all Middle Eastern and African) immigrants, more than a million flocked to Germany and the rest of Europe. Almost half as many came in 2016, and the flow continues.

Merkel’s term in office may come to a sudden end because of her 2015 immigration policy and the facts that a major part of her governing coalition no longer supports her all-are-welcome policy and that other European Union members are rebelling against it.

Merkel’s government majority is based primarily on the cooperation between her Christian Democratic Union with the Christian Social Union.

EU law and policy requires asylum seekers to apply for it in the first EU country they enter. Since 2015, most have entered the EU through Greece or Italy. Horst Seehofer, Merkel’s Interior Minister, is a CSU leader. He has refused to sign on to her open-door policy and proposed a counter policy which would prevent immigrants that applied for asylum in another EU nation from entering Germany.

Merkel rejected Seehofer’s rebellion. He, in turn, almost two weeks ago, gave Merkel two weeks to work out a compromise with other EU members or face dissolution of her government. So far, she has failed and there’s no prospect that she will succeed.

Giuseppe Conte, Italy’s new prime minister, has rejected Seehofer’s idea because it would cut off the flow of immigrants leaving Italy for Germany. Italy has refused to allow two immigrant boats to land. One was welcomed into Spain.

Matteo Salvini, Italy’s interior minister, specifically rejected the idea of taking immigrant asylum seekers back from Germany and has threatened to cut off Italian contributions to the EU budget if stronger immigration controls could not be agreed on. Salvini’s foreign policy adviser, Guglielmo Picchi, tweeted, “Either [the EU] pays for hotspots in Africa or we seal our southern border but not the [northern] one…and people prefer Germany and Sweden to Italy.”

The EU can’t, and won’t, agree on anything.

Hungary, Poland, and the Czech Republic all have rejected the EU’s demand that all member nations take a percentage of the large numbers of immigrants that have (and still are) flowing into the EU. The EU has threatened to sue them in the EU courts to compel acceptance of the immigrants. Hungarian legislators have “tweaked” its constitution to prevent settlement of “immigrant people” in the country.

Meeting in emergency session yesterday, ahead of an EU summit scheduled for Thursday and Friday, about a dozen EU leaders were bitterly divided. Merkel is desperate for a solution to her political crisis. France’s Emmanuel Macron wants financial penalties for EU members that don’t accept their quotas of immigrants. Italy and Greece, neither of which can afford the financial burden of the immigrants, are begging for relief.

The EU requires unanimity to impose any solution and nothing of the sort is on its horizon. The more that Germany and France push nations such as Hungary and Poland, the greater the danger that the divide between them will cause a breach in the EU that will break it up in the most literal terms.

There are hard lessons in the EU’s crisis for the president and Congress that will affect the November mid-term elections.

As last week’s political feeding frenzy over the separation of immigrant children from their parents continued, fed almost hourly by the media, Senate Minority Leader Chuck Schumer (D-NY) rejected the idea of any compromise with the president.

To quell the frenzy, the president issued an executive order requiring that children not be separated from their parents and trying to keep Trump’s “zero tolerance” promise intact. The order is in conflict with a court settlement, entered into by Obama’s Justice Department, and thus illegal. Nevertheless, military bases are being prepared to confine tens of thousands of immigrants together with their children while their asylum cases are decided.

What the president understands — and Congress evidently doesn’t — is that there is still enormous political anger among Americans because the president’s immigration agenda has enormous popular support. Republicans who don’t support Trump’s agenda — such as the forty-one who voted against the Goodlatte bill — may face defeat this year even though their Democratic opponents will march in lockstep with Schumer and House Minority Leader Nancy Pelosi.

A great many people — myself included — are sufficiently fed up with the Republican squishes to break the Bill Buckley rule: you should always vote for the most conservative candidate who can win. We can’t vote for the Dems, but it may be impossible to stomach voting for any of the squishes yet again.

The president is up against not only the Dems but the foreign leaders who want to keep illegal immigrants flooding into the U.S. Andres Manuel Lopez Obrador, the leading candidate for president of Mexico, has said that immigration from Mexico into the United States is a “human right.”

Trump plans to make immigration limitations — including the border wall — one of the biggest issues in this year’s campaign. He should because it is still a winning position. He’s called for our Border Patrol and other border agents to be able to turn away — without resort to due process and the courts — people trying to enter the U.S. illegally. Good idea, but our immigration laws and Constitution (as the courts have interpreted it) don’t allow that.

Where that leaves us is entirely unclear. If the Republicans lose control of the House this year, no immigration reforms along the lines of the president’s agenda will be possible. The same is true if the Republican faux-majority in the Senate isn’t strengthened as a result of the election.