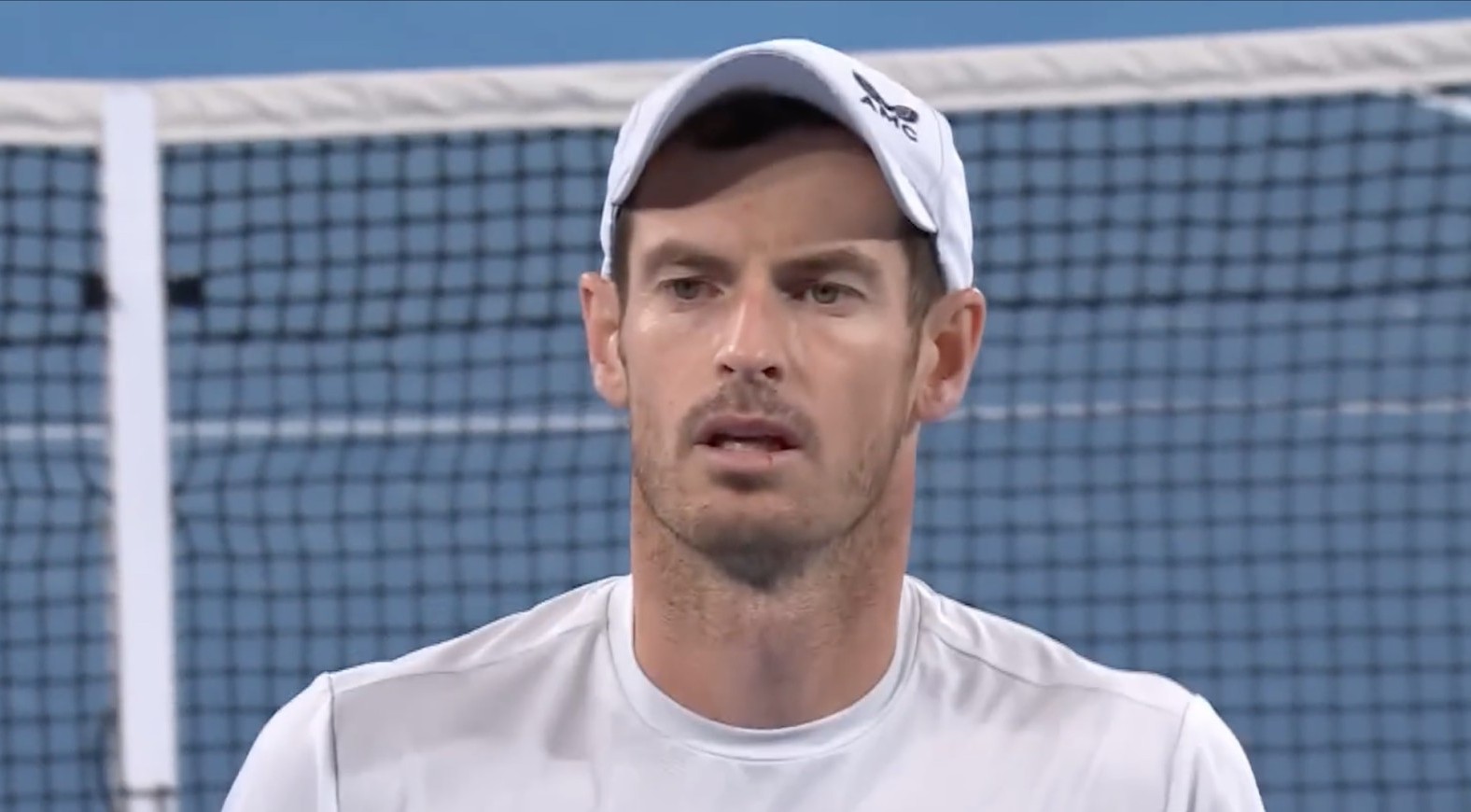 The Aussie put an ace on the T at 6-4 in the tiebreak to put himself ahead two zero in sets against Andy Murray. It was round two at the Australian Open, under the lights. Notwithstanding a brilliant defense at the net that pumped him up, it looked like the 35-year old, playing with a repaired hip, was not going to find a way to disrupt the younger man’s forehand and his mighty serve.

With Murray, even playing with a hip that required two surgeries, what it looks like after two sets is just numbers on a scoreboard. And sure enough, Britain’s toughest, grittiest, most emotional player was just warming up.

In fact, he was not finished warming up. Serving at 1-2, Murray retrieved two crosscourt would-be winners and two overhead smashes to the baseline, blocking one of them by putting his racket flat against the bounce, and then found a way to hit a crosscourt passing shot that made Tanasi Kokkinakis blanch first, then throw his racket on the floor. The fight was on. “I have a big heart,” the Scot would say a couple hours later.

Kokkinakis was far from finished — he brought the score up to 5-3 before Murray was in full comeback mode — but he was rattled. No one loses at tennis. The winner makes you lose, which is a different thing.

Murray kept his nerve to hold, stayed even to take it to overtime, and in the tiebreak he got ahead early with an inside-out forehand and an unreachable crosscourt return of serve. The cue to the changing tide came when Kokkinakis flubbed a weak return of serve on Murray’s first set point that he knew he should have put away easily.

Murray saved a break point late in the fourth set with a display of cross-shooting tenacity closed by a down-the-line winner and took the set with an ace on the T at ad-in, avenging Kokkinakis’s ace to win the second. A dash to the service box to retrieve a short ball saved Murray’s service early in the fifth, but Kokkinakis upped his game and they went point for point and game for game until Murray broke to go up 6-5, then held serve for the match, five and three-quarter hours after it began, not long before dawn.

There have been many long matches on the Grand Slam circuit, and there have been many dramatic, inspiring comebacks. Rafa Nadal won this very tournament last year after dropping the first two sets to Daniil Medvedev; Dominick Thiem did the same at the U.S. Open in ’21, coming back against Alexander Zverev. I could look up the whole history, but my Bud Collins History of Tennis is not at hand. Tennis is a game of dramatic shifts in momentum; as in baseball, it ain’t over till it’s over.

Observe, however, that these recent matches were Slam finals. In the finals of a two-week endurance test at one of the four most prestigious tournaments, the last two men standing are at peak will-to-win. They are so focused that two sets down is scarcely noticed except that it gets the adrenaline flowing even faster than seems anatomically possible.

Here it was only the second round. Now with Andy Murray, beyond the brilliance of his game, there is a rare ability to put everything into every match he plays. At 35 and with two hip surgeries he could be excused for thinking he made his point by reaching the second round. And it would be no dishonor against the 26-year-old Aussie from Adelaide, with one of the strongest serves in the game and a lightning forehand to keep you moving from alley to alley without pity. Murray does not want your pity. He wants you to suffer more than he does.

Exhilarating as the match was, it cannot but give one pause — as it notably did to our Double E, vernacular for Executive Editor, here at TAS. The fighting spirit is admirable and is one of the lessons imparted by sports, but the question lingers: what if surgery amounts to unfair advantage?

Rafa Nadal lost in straight sets to Californian Mackenzie McDonald in the same second round, visibly suffering and slowed in his movements, though battling all the way through. (There is only one case on record — to our recollection — when the injury-prone Nadal forfeited before the end of a match.) He was diagnosed with a hip flexor injury that will sideline him for six to eight weeks.

In the procedure called ulnar collateral ligament reconstruction, UCL or Tommy John surgery, torn elbow ligaments are repaired with the use of ligaments taken from other parts of the body, rather than metallic materials, which are used in hip resurfacing.

The matter commands reflection, but there are no reports from Melbourne that it came up at the press briefings. Andy Murray, who is articulate on social and health issues, espoused the kind of vaccine mandates at tournaments that kept Novak Djokovic from competing last year. The world no. 1 admitted to a hamstring injury following his second-round win over France’s Enzo Couacaud,

At the athletic level, Kokkinakis missed crucial, easy winners that might have been decisive in the third set, one at 5-3, 30-15 if memory serves, and then he made a mess of the tiebreak. At that point his spirit must have fissured (I will not say cracked, I was not there) and Murray took charge over the next two sets. And yet: what if his partly mechanical hip “carried” him more durably than the younger man’s own legs? Nobody asked.

It is possible to lose a tennis match; but putting it this way misses the more important point, which is that the other fellow won it. Poor play is caused by rich play. Someone causes you to lose, and this match provided a thrilling demonstration of this axiom. Murray’s determination and courage are not in question; but the boost he got from medical engineering someday may be viewed as a performance enhancer in need of regulation.

Murray has a tough third round next, against the resilient and patient Spanish baseliner Roberto Bautista-Agut, and if he gets past him he will meet an American in the fourth. The young Americans have been impressive, but it will take more than skill and hunger to take down the stubborn and superb Scot, Andy Murray.

AO notes: Among American players, Frances Tiafoe, lost to Karen Kachanov, but Sebastian Korda beat Daniil Medvedev and Jenson Brooksby beat Casper Ruud; among the women, Coco Gauff and Jessica Pegula seem most likely to have a shot at challenging Iga Świątek, who is cruising through the first week.