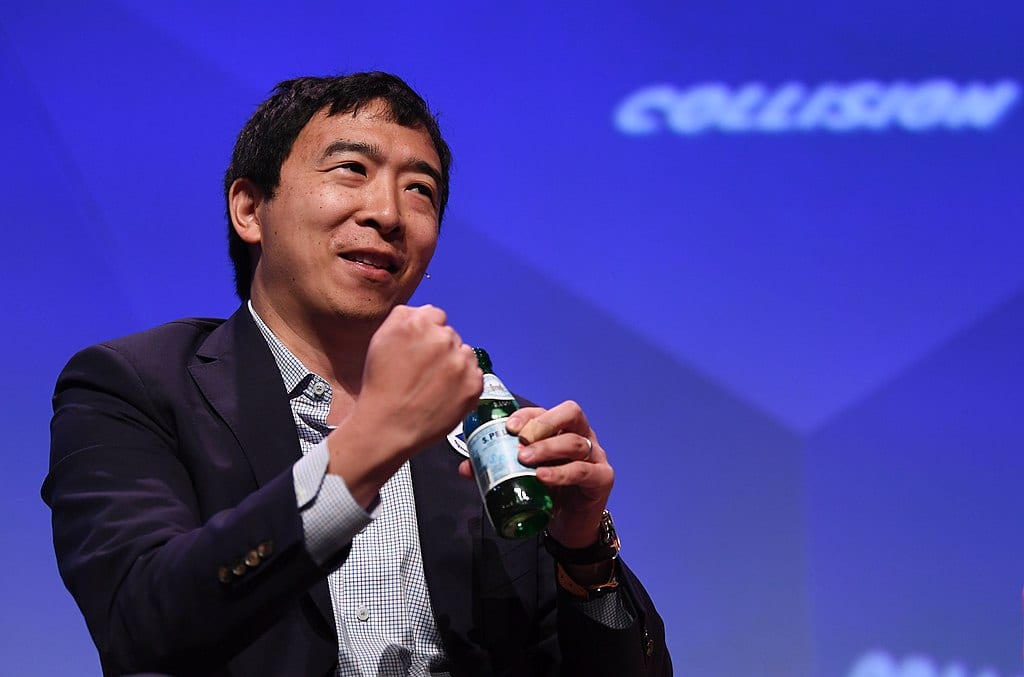 The road to hell, as we know, is paved with good intentions.

And perhaps no one has better intentions, or a faster car, than Democratic presidential candidate Andrew Yang.

The Asian entrepreneur’s sense of humor and cheery disposition are a breath of fresh air compared to an otherwise doom-and-gloom Democratic field. But it’s this likability that makes Yang particularly dangerous — for the more agreeable he is, the more naive voters are likely to buy into his version of Universal Basic Income.

UBI, as it’s popularly known, is essentially a guaranteed check from the government that citizens are free to use any way they see fit. Yang’s website describes his version thusly:

The idea of a UBI is gaining traction in the national conversation due to fears that technologies such as artificial intelligence and automation will drastically reduce the number of jobs available to Americans in the coming years.

In other words, it’s a policy rooted in fear. Not a new fear, mind you, but one that has always haunted progress, and yet time and time again has been proved unfounded. In fact, the term Luddite, which has come to define broadly those opposed to technology, is rooted in a movement from 1800s England that opposed the use of machinery in the textile industry. A more American version exists in the legend of John Henry, the “steel-driving man” who dropped dead attempting to prove that he could outdig a machine.

And yet today, in the thick of the Information Age bombarded by technology unthinkable just years ago, American unemployment hovers near historic lows.

But facts are of little consequence to those being offered something for nothing, and Yang’s appeal is growing among Democrats. He’s gone from a long shot just months ago to fourth place in a recent Emerson poll, even leading Kamala Harris in her home state of California.

This success is in no small part due to Yang separating himself from his socialist competitors by touting his economic vision as capitalism, even alluding to the corporate model by branding his version of UBI the “Freedom Dividend” (because nothing says freedom quite like reliance on a monthly check from the government).

It’s a clever linguistic sleight of hand, but Yang’s plan, financed by a value-added tax and increased taxes on the rich (among other things), is just another entitlement stepping stone on our slow march toward socialism.

And like all entitlements, it’s terrible policy. Even the most rudimentary examination of Yang’s UBI reveals numerous shortcomings that make it a miserable failure in the long run.

For starters, the program will be run by the very same government that has allowed our current entitlement structure to balloon beyond control.

Entitlement spending grew from less than 0.5 percent of GDP in 1900 to roughly 19 percent by 2010. In fact, Medicare, Medicaid, and other safety net programs consumed roughly 35 percent of the federal budget in 2017, and along with Social Security promise to bankrupt the country if allowed to continue unabated.

The Freedom Dividend will only hasten this demise, and the Yang faithful who insist otherwise are no different than the die-hard leftists who claim “the other guys didn’t do it right” when discounting socialism’s past failures.

But, we are told, UBI will actually save money elsewhere by reducing the bureaucracy that haunts other federal entitlement programs. Not so, as Yang’s Freedom Dividend doesn’t get rid of entitlements altogether. Rather, according to Yang’s website, “current welfare and social program beneficiaries would be given a choice between their current benefits or $1,000 cash unconditionally — most would prefer cash with no restriction.”

Of course they would! The one merit of the current system is that it at least attempts to ensure government assistance goes to families instead of getting squandered on vices such as alcohol and drugs. Under Yang’s plan such oversight would be optional, ensuring that America’s most vulnerable will suffer the most.

Besides, $1,000 per month in today’s dollars is very little money. In an age where $100 barely buys a decent dinner in most big cities, it’s mystifying why some think 10 times that amount will rescue America from its inevitable robot overlords.

But such logic hasn’t stopped other countries from trying their own UBI experiments. Spoiler alert: they didn’t end well.

One of UBI’s central tenets is that it will increase employment because recipients needn’t worry about losing benefits once employed. The results of an experiment in Finland proved this wasn’t the case. A similar experiment in Canada was canceled last year due to its being “quite expensive.”

It’s a good thing too, because should any form of UBI succeed an absurd future is sure to follow.

The masses, dependent on their payments, will vote solely on promises to increase them. Entitlements, like taxes, are rarely, if ever, repealed, and once the government starts writing checks to every Tom, Dick, and Harry you can bet the populace will not part with them peacefully.

Soon our coffers will be bare and our existence solely dependent on the goodwill of the state, and for what? A measly check that doesn’t even begin to pay a house note most places?

Proponents of UBI frequently bite back by citing that conservative pundit royalty, such as Milton Friedman and Charles Murray, have voiced support for the policy, and that even Richard Nixon came dangerously close to advocating for such a system.

Nixon and Friedman were human and were deprived of decades of data that show just how poorly entitlements perform in eliminating poverty. Murray is simply misguided, although he is adamant that UBI replace all other forms of assistance, something that, again, Yang’s plan fails to do.

It’s easy to see why people like Yang. He’s an enigmatic, interesting figure who largely foregoes the hateful politics of his Democratic colleagues.

But that only makes him, and his ideas, exponentially more dangerous.