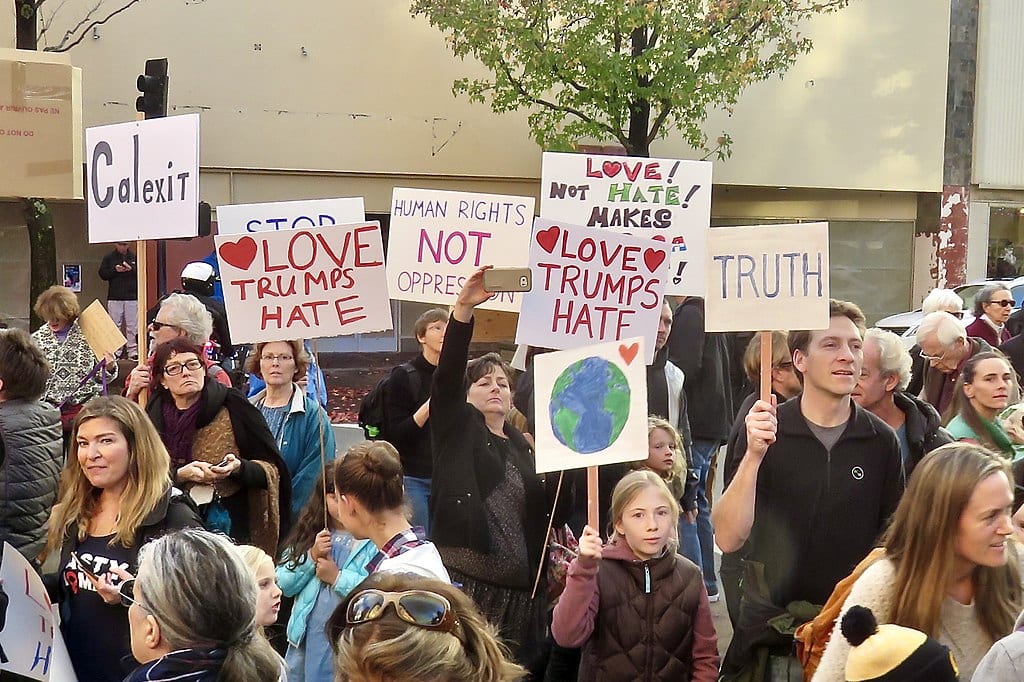 I returned just now from a memorial service, at a packed Presbyterian church, for an 86-year-old orthodontist who was loved. Loved? That’s not quite the measure of it. Friends and family spoke of a man who smiled perpetually and, better yet, sincerely; who always saw the good in others; who relished making things better rather than worse; who — I know what you’re going to say — sounds made-up. But I knew him rather well, and he wasn’t made up. He was different; un-modern. That’s what struck me.

We 21st century Americans seem to hate each other. Hate, despise, loathe. Grrrrrr, snarl, ptooey. Especially we hate each other when the talk turns to — if ever these days it turns away from — politics. The progressive MSNBC talk show host Joy Reid recently told the New York Times, “People don’t just want to disagree with the people they disagree with. They want to destroy them.” Which is one way of dealing with opponents: wipe ’em out — a strategy at odds with the outlook of my late friend the orthodontist, who, for some unimaginable reason, liked people of all sorts.

It is in no way odd, against this blood-red backdrop, to read of a lawsuit starting to surge through the federal court system against 15 defendants and “alt right” groups accused of stirring up last summer’s riot in Charlottesville, Virginia, over, nominally, the presence of a Robert E. Lee statue on public land. One woman died in an automobile accident due to the riot, and 30 others were injured. The lovely college town where Thomas Jefferson planted the University of Virginia was turned upside down.

The defendants assert that all they ever intended was exercise of their constitutional right to free speech. The suddenly famous white supremacist Richard Spencer, a leader of the affray, declares that “harsh and bold words, as well as scuffles, are simply a reality of political protest” — the cost of “a free assembly and maintaining a vibrant political culture.”

Umm-hmm, yes; throw a rock and call it speech, the equivalent of eating a turnip and calling it foie-gras. Our wacko culture insists, as it has for some time, on its supposed right to reinvent reality — give it new shape and colors; change its name; play just-pretend games, as if life were a first-grade sandbox. One problem with this alarming design for living is the hatred it can incite.

Mr. Spencer and his friends represent the spirit of the 1960s, when free speech, in the mouths of left-wing yahoos, came to mean Stop the War and make the fascists (i.e., everybody else) beg for mercy. “Kill your parents!” Jerry Rubin enjoined. Somehow in this atmosphere free speech came to mean the right to burn American flags or disrupt funerals with cries of “God hates fags.”

The point likely appeals to Mr. Spencer and his cohorts. We’ve after all been keeping their plates warm for 50 years. Sooner or later, the so-called right was bound to join the self-styled left in inciting hatred and violence. It came to pass in Charlottesville.

We’ve long since as Americans lost any intuition regarding what it means to disagree without throwing rocks or calling names. The founders had something else in mind when they wrote free speech into the Constitution as a guarantee of… speech! Imagine: words, clauses, paragraphs setting forth ideas, notions, arguments. Things for people to think about; to engage with, as a substitute for engaging others on the field of battle.

How did I get into all this? Ah, yes; the jam-packed memorial service for a man honored for encouraging, rather than giving the bird to, others: in marked contradistinction with the modern style of hate-your-neighbor-if-he-sees-things-in-his-own-way. It says something important and hopeful, possibly, that the service for such a man was indeed jam-packed. Maybe there is yet demand for a social ethic more serviceable than the present one in pursuit of peace and freedom. But it’s going to take work; and one of the archetypes of the quest has left us to figure it out for ourselves.

William Murchison is writing a book on moral recovery.