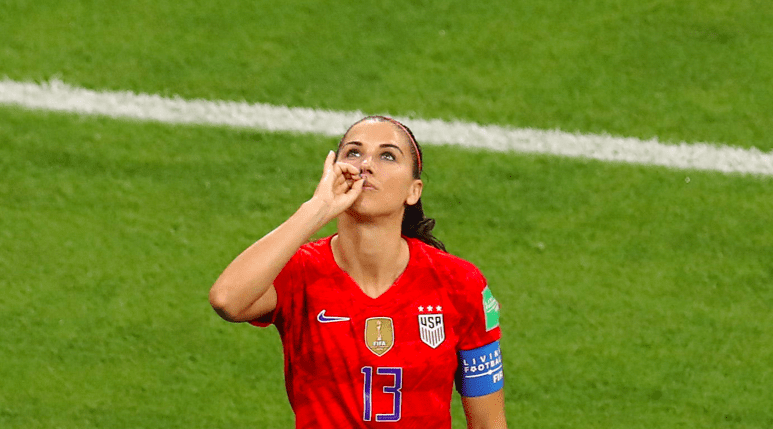 Congratulations! You’re in another World Cup Final. What an achievement for you and Team USA. If, as I fully expect, you win on Sunday, making it four World Cups in total, there will be no question: America rules. You’ll leave us in no doubt that you are the greatest women’s soccer team the international sport has ever known. Very well done.

Not like those Thai women. You showed them about American might, didn’t you? The Thais were lucky to get zero, and you celebrated the thirteenth goal like it was the first. Good on ya.

And you’re quite a budding Hollywood actor too, aren’t you? That pointed little gesture after you scored a beautiful, athletic headed goal against the English in the semifinal was comedic gold. Perfectly timed, and with an expression of practised innocence, you raised that imaginary teacup to your lips and even remembered to stick out your little finger. Getting the detail right is all-important, when, as we say in England, you’re “taking the piss” out of someone you’ve just beaten, rubbing salt into a gaping wound. That’s the privilege of being a winner, I know you’ll agree.

You’re right, of course, Alex. I’m being a touch ironic here. We English like to think we’re good at that, even when we suck at soccer. See, I don’t know if you care about this, but how much more impressive would it have been if you’d come up with a different goal celebration — one that expressed your pride and joy rather than one that appeared to goad and humiliate another nation? It’s just a thought.

Oh, don’t you worry, we English have long since given up the pretence that the “special relationship” is anything more than a diplomatic soundbite, trotted out at Buckingham Palace banquets during Presidential visits. But we were under the impression that America and England are still close friends who respect each other and work in partnership where possible, and who even like to see each other do well on the sporting stage (yes, I love Ian Darke too).

Your gloating faux-innocent celebration makes us wonder about all that. You do that to your enemies, Alex, not your friends. Diego Maradona was a cheat, but even he knew how to celebrate with a degree of respect for his opponents. At least on the pitch. And that really is saying something.

I know, I know, I should get a sense of humor. I should, as one of your teammates dismissively puts it, stop going, “Wah, wah, wah.” There’s really important stuff going on in the world, and I’m getting all uptight about a mere goal celebration. Get a life! Well, okay, okay. Maybe you’re right. But are you sure that you’d be able generously to laugh along if the boot was on the other foot and, God forbid, you actually lost at something?

It must be great being young, striking, talented, and victorious. I never was. But nobody — not even you — can always be a winner. Not forever. There will come a time when you get beaten at something. That “something” might be important to you. It might hurt you badly. Now, how would you feel if a someone who scored the winning goal against you in a World Cup semifinal then ate an imaginary burger and fries, wiping away the ketchup and belching?

Don’t get all shocked by the analogy, Alex. If you give it, you have to take it.

I can assure you, though, that it won’t be an English team that does that to you. That’s not just because I can’t see us beating you any time soon (I’m not that crazy), but, more importantly, because those who represent England on the international stage have a philosophy engrained into them that might appear a bit weird to you: They are there to do their country proud not just by playing well but also by behaving well. And on the rare occasion that they don’t — and I wouldn’t pretend we’re perfect, by any means — we English are the first to tell them. That’s why we’ve won far more FIFA “fair play awards” than World Cups. Yeah, I did tell you it was weird.

Believe me, we English sports fans are used to losing on the big stage, especially in semifinals, so we’re quite practised at putting on a brave face to disappointment. (And, by the way, we’re all really proud of how our English players reacted to being beaten by you, behaving with dignity and treating you with respect. They earned the affection of our whole nation).

But just occasionally — very occasionally — we surprise ourselves by winning a World Cup at soccer or rugby. And on those all-too-rare occasions, I’m proud to say that our players have celebrated as well as they played. If you’re interested, Google “Geoff Hurst hat-trick” or “Jonny Wilkinson drop goal” and you’ll see what I mean.

I admit that it sounds horribly old-fashioned in our brave new world. But isn’t it still the case that it’s not in defeat that your character is really tested, but in victory?

Robert Taylor is a journalist and communications trainer who has written for a range of publications, including the International New York Times and the UK’s Daily Telegraph. Find him on Twitter @TaylorColumnist.