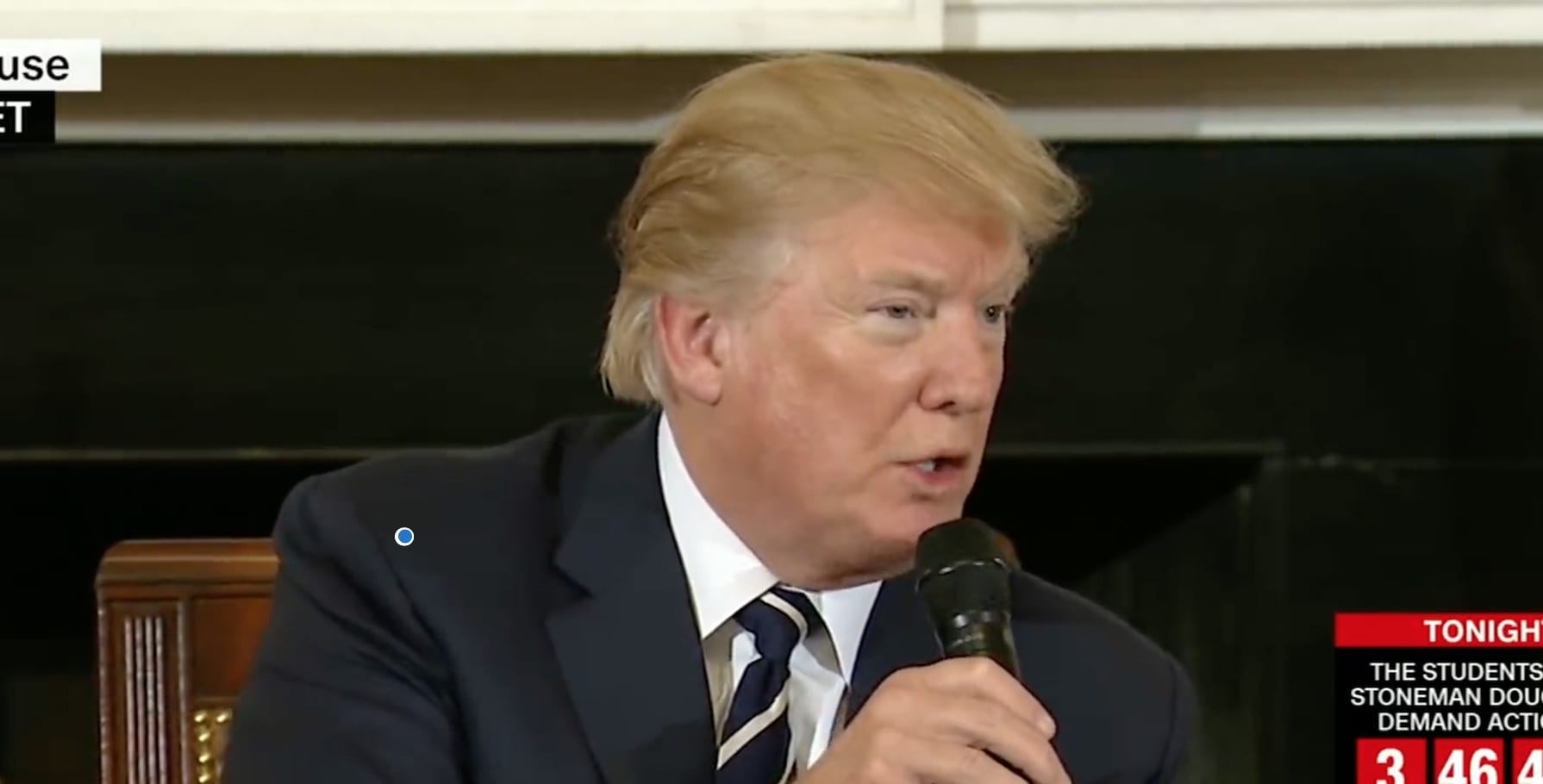 He’s insane, they tell ya! He’s crazy bonkers even to suggest such a mad, loony, wacky idea. He’s as flaky as a corn flakes factory and as potty as a Pottery Barn. He’s so completely bughouse that he should be fitted with a straightjacket and locked in a rubber room after being sedated with a tub of the stuff they use to subdue rogue rhinos. Has he, as Shakespeare wrote in Macbeth, eaten “the insane root that takes the reason prisoner?” He is, if you are any expert on everything spouting off on CNN or MSNBC or PBS or etc., etc. The madman in question is President Donald Trump, and the reason he’s insane is that he suggested some armed teachers in America’s schools might prevent massacres.

If you fly commercial, there’s a chance that the guy in the seat your child is kicking is a Sky Marshal. He’s there with a gun discreetly tucked under his suit coat to protect you from terrorists. If you go to a classy jewelry store where zircons are as the lowly peanut, there’s apt to be a guy in a uniform with a gun to be sure you don’t leave with your pockets full of what isn’t yours. If you drive through the vastness of the Great Plains, where the arrow-straight roads are so empty that a jackrabbit can sleep all day on the white line without being disturbed and a state trooper will, as comic Rich Hall once remarked, pull you over because he’s lonely, that officer will have a gun on his hip just in case something goes sideways. Wherever there is something to be guarded, even stretches of remote asphalt, there are people with guns. Everywhere but schools.

Why is this so? The opponents claim bringing guns into the classroom is dangerous. A teacher might go off the deep end. I suppose it might be possible that a teacher with a pistol could open fire after telling Billy for the millionth time to leave Jane’s pigtail alone. I remember a third-grade teacher with hair permed too tight whose eyes blazed from behind cat’s eye glasses like the unbanked fires of deepest Hell. She did snap once or twice but her weapon of choice was a ruler. I don’t think that even if she’d been geared up like Rambo, she would have started shooting. Teachers are supervised, and they have a roomful of students who will tell mom and dad if they show signs of mental illness.

The opponents add the possibility that police responding to a shooting might mistake the armed teacher for the school shooter. This could happen if an officer upon seeing a man or woman twice the age of the students confuses that person with an armed kid decked out in black blazing away at the students, the teachers and the officer. The opponents also say that if teachers shot back at school killers some innocent child might get injured in the crossfire. They argue that a possibility is to be feared more than a certainty. The school shooter will kill. The teacher might. As with every other choice in life, it’s wise to go with the odds.

Teachers aren’t trained to battle school shooters, opponents say. We have four branches of the military, fifty varieties of state troopers, hundreds of police departments, thousands of armed bureaucrats in everything from the FBI to the Department of Agriculture, and also the National Guard. They have trained millions of Americans in how to use firearms. There are also many civilians who have expertise. Some have even gone through gun safety programs sponsored by the National Rifle Association. America’s teachers include members drawn from these ranks. There are also retired members of these agencies who would be willing to become school security guards instead of standing by the door of a Walmart saying “welcome, welcome, welcome” like the friendliest parrot in town. The skills needed to protect our kids are well developed in our populace and if a teacher doesn’t have the skills, he or she can be taught them. Teachers, as a class, are amenable to education.

The weakest argument against armed teachers or guards is that the presence of a gun will create a bad atmosphere in the classroom. A gun might scare a child but so do bears, thunderstorms, and fuzzy-lipped aunts who want to kiss them. Adults explain that bears aren’t likely to drop by the child’s home, that thunderstorms are mainly a lot of noise but you shouldn’t stand near a metal flagpole during one, and that Aunt Mae’s feelings will be hurt if you shy away from her while comparing her to Chewbacca. The teacher’s gun is also easy to explain. It’s here to protect you. Even more easily, the teacher can simply keep the gun in a locked drawer and not display it to his pupils. This can avoid frightening students while making school shooters wonder whether Mr. Smith in Driver’s Ed or Miss Jones in French might be able to stop a rampage.

What about the teachers who don’t want to kill? Pacifism is a respectable personal choice in some situations, but it entails difficult moral questions when your inaction can injure others. You don’t want to kill, but the school shooter does. You may be willing to die rather than kill, but your students probably aren’t. If you oppose anyone being armed, then you are imposing your pacifism on others. Just who are you, to make that life and death decision for them?

For some opponents, their opposition is founded in a distaste for guns. They don’t own one and have never fired one because guns are evil and they define themselves as good people. However, nearly every human device, since some caveman figured out that a rock could be used to smash something softer than the rock, can be turned to evil. That rock could crack a skull but it can also open a stubborn nut. So it is with guns. They are dangerous. They do kill. But they also can protect.

Every school shooting has been concluded using guns. The police show up, surround the school and go in guns at the ready. They don’t use tasers or billy clubs or kung fu or that caveman’s rock. They use the tool best suited for the job — a gun. Wouldn’t it be good if someone with similar training could employ that tool before the death count soared? A teacher with a gun might be able to do that. That’s not such a crazy idea. What’s crazy is forcing students to be sitting ducks.