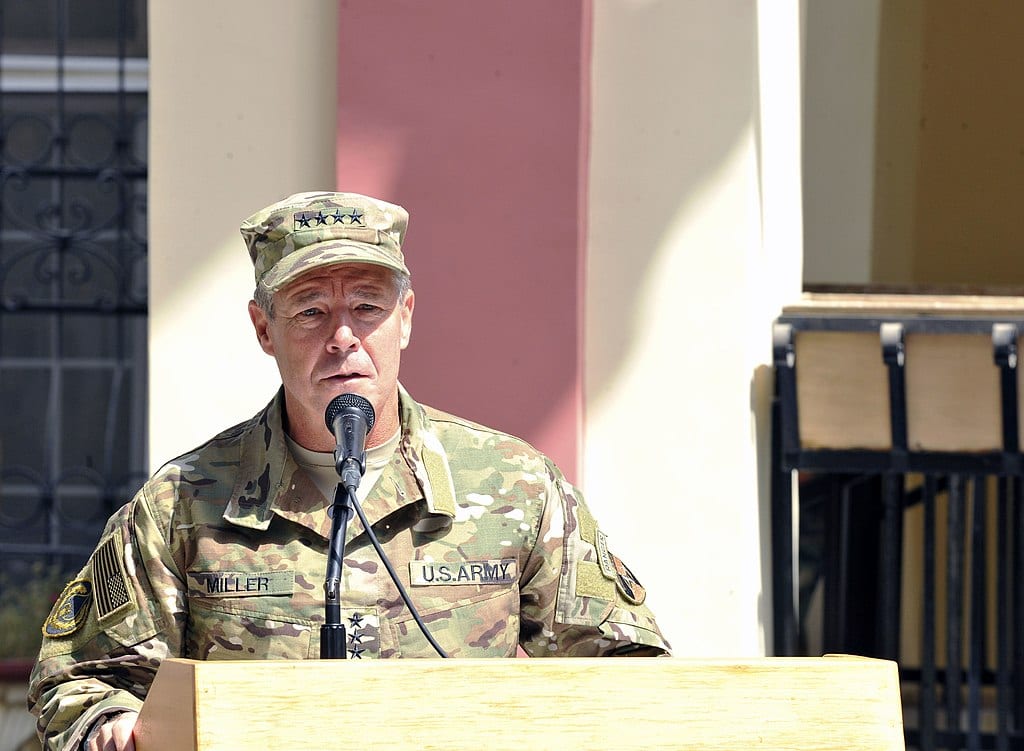 On 18 October, a Taliban attacker penetrated a provincial governor’s compound where top U.S. commanders and Afghan security leaders were conferring about security for the parliamentary elections the following weekend.

The group was, for the Taliban, a dream target. Among those gathered were U.S. Gen. Austin “Scott” Miller, overall U.S. commander in Afghanistan, Afghan Gen. Abdul Raziq, Kandahar police and intelligence chief, as well as other high-ranking Americans and Afghanis. When the group gathered for a photo op a Taliban fighter, dressed in an Afghan uniform, began shooting at them.

In the attack, Gen. Raziq — a highly-regarded enemy of the Taliban — was killed. Miller was unharmed but others, including one U.S. brigadier general, were wounded.

It’s not unusual for the Taliban to want to kill U.S. commanders, but the 18 October attack was probably the first in seventeen years of war in which our top general was in immediate danger.

The damage the attacker inflicted by killing Gen. Raziq and nearly killing Gen. Miller is a very serious blow to the overall psychology, not just the morale, of the Afghani forces and ours.

It is a massive understatement to say that the election, held last weekend, didn’t go off without a hitch. The Taliban had threatened that voters would be killed if they went to the polls, declaring the election “un-Islamic.”

Though about 54,000 Afghani troops were deployed to protect voters, at least 27 civilians and 9 security troops were killed in election-related violence and more than 100 were wounded according to a Wall Street Journal report.

Voter turnout was reportedly about 50 percent, more than the turnout in many U.S. elections.

The election, set for Saturday, had to be continued through Sunday because of the many attacks. In Kandahar Province, the election was delayed a week by the attacks. These delays — and the attack that took Gen. Raziq’s life— are severe blows to the credibility of the Kabul government.

The Afghani population wants a say in its government, but doesn’t prove the idea that Afghanistan will foreseeably — if ever — become a democracy. The obstacles are too formidable for that to happen.

The primary reason for that is now on display in Pakistan.

Asia Bibi, a 53-year old Christian woman, was sentenced to die for blasphemy by a Pakistani court in 2010. According to another Wall Street Journal report, Bibi was charged by two Pakistani women of polluting a cup by drinking from it. Based on their accusation, she was found guilty of making statements such as, Jesus had “died on the cross for the sins of mankind” and asking, “What did your Prophet Muhammad ever do to save mankind?”

A Pakistani appeals court heard arguments on her case earlier this month and delayed its ruling because of threats by one of the many terrorist groups Pakistan harbors, in this case the Tehreek-e-Labbaik Pakistan.

Two things are in play in the Asia Bibi case. First is the harshness of Pakistan’s anti-blasphemy law. Second is the fact that despite the government’s supposed control of its own functions, terrorists can control the courts.

If the Taliban now ruled Afghanistan, they too would have criminalized Bibi’s statements. They, like the Tehreek-e-Labbaik, are driven by the same radical Islamic ideology that the vast majority of Afghanis, Pakistanis, and other Muslims believe in fervently. Similar Islamic ideologies dominate in nations from Iran to Saudi Arabia, across the Middle East and much of Africa.

That Islamic ideology, as I have written many times, is so deeply embedded in Muslims’ minds that it prevents Western democracy from taking hold in their nations. Moreover, it drives too many Muslims’ lives and their nations’ relationships to the non-Muslim world.

Those nations’ relationships with the West are not reparable while that ideology — and its several manifestations in Sunni and Shiite nations — continues its domination of peoples’ lives.

Though I have written it many times, it bears repeating that unless and until we war against that ideology — not just its terrorist practitioners — we cannot defeat terrorist networks and the governments that support them.

It also bears repeating that our military knows this, as — at some level — does the president. But none of them are doing anything about it.

The Pakistanis, however, are. One highly reliable source informs me that the Pakistanis are hiring retired military personnel and assigning them to lead terrorist gangs in attacking U.S. and Afghan forces. Why would they do so? Do they sense that America is about to quit the fight in Afghanistan? If so, they could be right.

Trump is impatient with the Afghanistan war. Early in his presidency, his advisors reportedly talked him out of an immediate withdrawal. That created the obligation in those advisors — and their successors — to craft a strategy that accomplishes a goal for Afghanistan that benefits American national security. It is pretty obvious that they haven’t done so.

It’s fair to ask how long we will maintain our nation-building effort in Afghanistan if, after almost two decades, the Afghan government is capable of neither protecting its generals nor running an election?

In July, the president pushed his administration to begin direct peace talks with the Taliban. Those negotiations have reportedly begun in Doha, Qatar.

They will not succeed in establishing Afghani independence even if — as some have suggested — Afghanistan is partitioned between the Taliban and the Kabul government.

If Afghanistan is partitioned between the Kabul government and the Taliban, the Taliban will retake the entire country as soon as U.S. and NATO troops leave.

These negotiations cannot succeed for at least two reasons.

First, the Islamic ideology that motivates the Taliban insists that Islamic rule — i.e., sharia law, not democracy — is inevitable, the will of god. Many Afghanis, even those who suffered under Taliban rule before 2001, believe Islamic rule preferable to Western democracy and the rights it preserves to its citizens.

Second, the Taliban benefit from Pakistan’s multi-faceted support. They are also supported by arms and supplies sent by Russia and, now that China is rendering Pakistan a tribute state, by China as well. Those nations will continue to support the Taliban regardless of how long their struggle against Western forces may last.

Trump seems to understand that our economic power is also an economic weapon. He is using that weapon wisely to strangle Iran’s economy. The economic weapons we use against Iran aren’t available to us against the Taliban because Afghanistan has no economy to speak of and the Taliban are receiving so much international support. But the economic leverage we have over Iran we lack in our contests with China and Russia.

Pakistan is another matter. Even more than Afghanistan, it is dominated by Islamic ideology, as the Asia Bibi case demonstrates. Trump has employed some economic sanctions against the Pakistanis but to little avail.

More can be done to pressure Pakistan economically. It is seeking another financial bailout by the International Monetary Fund, having received successive bailouts since the 1980s. We should oppose that bailout and kill it if possible.

Killing another IMF bailout would help pressure China as well due to China’s massive investments in Pakistan which are concentrated on building Chinese-controlled infrastructure, including military bases. Despite China’s investments, Pakistan’s economy is failing.

None of those actions will provide short-term success in Afghanistan. If we begin a war against the Islamists’ ideology, it will not succeed for years, possibly decades, or much longer. That would require an attention span beyond our successive governments’ capabilities, but we must try.

The only goal we should have in Afghanistan is to prevent it from returning to its pre-9/11 state as a base for international terrorism, and to maintain that condition for years or decades, some elements of our military — intelligence, special operations troops, and air power — will have to stay there for many decades to come.

In order to achieve that goal in Afghanistan, we will have to deal with Pakistan’s sponsorship of the Taliban and other terrorist networks. That is a discussion for another day.

Without engaging and defeating the terrorists’ ideology — devoutly followed by Pakistan and too many other Muslim nations — our troops could stay in Afghanistan forever without achieving that goal.