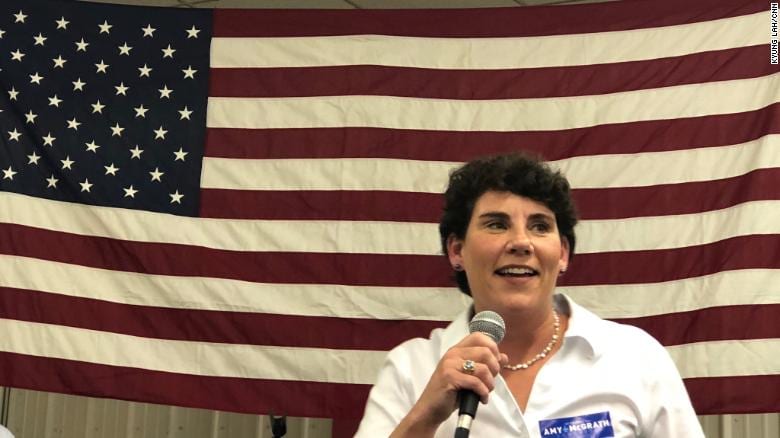 Amy McGrath announced last Tuesday that she is running to become the next U.S. Senator of Kentucky. As a Democrat, McGrath has a real challenge ahead of her in a state that hasn’t elected a senator from her party since 1992. She does have several clear advantages, though: outsized media coverage and significant fundraising (including a record $2.5 million on her first day of campaigning). This is for one simple reason: she’s running against the Republican Senate Majority Leader Mitch McConnell.

Her story is an inspiring one. As a Marine combat aviator, she flew over 80 combat missions, and she deserves the nation’s respect and gratitude for her heroic service. McGrath also ran for the House of Representatives in 2018 and lost to Andy Barr in a fairly close election. Yet Kentucky as a state is firmly Republican, with President Trump holding a positive net approval rate. A statewide election will certainly be difficult for any Democrat, let alone one with as many left-leaning positions as McGrath has. The McConnell Senate Committee was quick to point out that electing McGrath to the Senate would mark a “radical left turn for Kentucky,” and launched its “Wrong Path McGrath” website in an attempt to further publicize her views. These include pro-abortion, pro-Obamacare, anti-Trump tax cuts, and anti-wall policy stances. None of this will do her any favors with the large number of Kentucky voters that she will have to win over from the McConnell camp.

McGrath has seized onto the new American Democratic platform, in which policy and mannerisms are inextricably linked. She already had a strong foundation in her narrative of overcoming male oppression to obtain her position as a combat pilot, one that an old, white man once told her she could never have. Her 2018 run for Congress was launched with a viral campaign ad that explained the story of how, after receiving a letter from her congressman that stated women should not be allowed to serve in combat, she was accepted to the U.S. Naval Academy and went on to fulfill her dream. McGrath also made sure to include the line “I never got a letter back from my Senator Mitch McConnell.”

But she has had several mishaps that should have hurt her pedigree with the Left, including flip-flopping multiple times over her position on Justice Brett Kavanaugh’s admission to the U.S. Supreme Court (although she did eventually land on the correct Democratic position: “I would have voted no”). In apparent support of President Trump, she has also blasted McConnell for not allowing him to fully implement his policy agenda, saying that “a lot of these things are being halted by Senator McConnell.”

The media has been quick to come to her aid, however, with NBC releasing an article about McConnell’s great-great-grandfather being a slave owner mere hours before McGrath announced her candidacy. Despite McConnell’s relatively low popularity as a politician — even in his own ruby-red Kentucky he only has a 36 percent approval rating — McGrath’s chances of victory are slim. The inordinate amount of media attention and financial support would likely be better spent on Democratic senatorial candidates in various states with a more feasible chance of ousting the Republican incumbent.

But that is assuming that a win for McGrath is the primary motivation for this outpouring of support. While unseating McConnell would certainly be welcome news for the Democratic Party, this may instead be indicative of a clever, more subtle strategy: First, draw attention and support to politicians who fit the appropriate profile of today’s American Left in order to attract donor money from younger, more progressive voters. These individuals have shown themselves willing to contribute even small amounts that add up to significant sums. Examples include Beto O’Rourke raising over $70 million in his 2018 Texas senate race loss to Ted Cruz and Bernie Sanders spending over $230 million on his unsuccessful bid to be the 2016 Democratic presidential nominee.

Republicans are then forced to invest the commensurate funds necessary to confront these challengers, diverting dollars that could be used in more contested elections. Whether strategy or simply a poor investment of money, this seems to be the new standard of Democratic support for candidates who run against big-name Republicans.