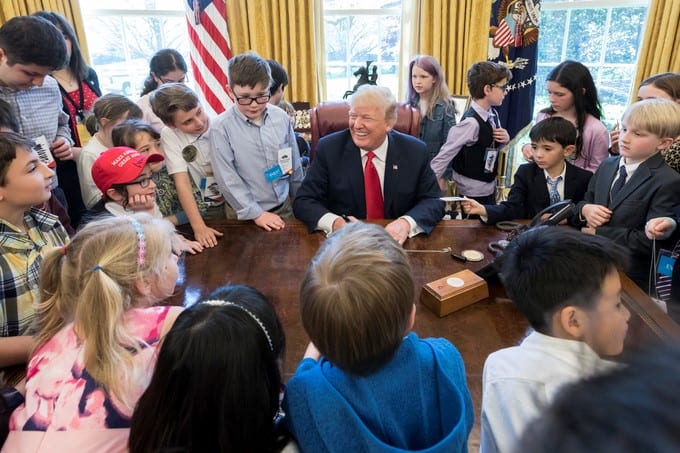 File this under Hope Springs Eternal: When Donald Trump somehow emerged victor on Nov. 8, 2016, I soon enough predicted that he would turn out to be America’s most beloved president since Ronald Reagan. I still think that. For one thing, simply as a personality there’s so much more there than in his four immediate predecessors. What’s more, with him what you see is what you get. For all his alleged sins and sinning he can never ever be accused of hypocrisy. In this day and age, that’s reason enough to canonize him.

My mind always goes back to October 2013 when Trump stole the show at our annual dinner, much no doubt to the dismay of our keynote speaker that night, Sen. Ted Cruz, whose earnest speech really did not go over well, following as it did Trump’s warm and witty remarks. But what I remember most is Trump before dinner, mingling at the general reception and joshing and schmoozing with one and all. One woman right in front of me tried to give him a hard time about something, to no avail. He quickly disarmed her, with a smile and an eye roll and maybe a few faux grimaces. I think I was supposed to try to get him to go over to the VIP reception, but he wanted no part of that. He was happy to be right where he was and the VIPs never did get to visit with him up close. In case you haven’t noticed, he’s always his own man even if that’s no longer allowed.

For his troubles he’s been savaged and dehumanized by a crazed, bigoted opposition that refuses to play by any rules once thought the norm in our politics and culture. Even before his election he was being sabotaged by his opponent, the ruling administration, U.S. intelligence, and the FBI. Same thing in the two and half months leading up to his inauguration. And ever since, by the permanent fruits of bigger government and the cockroaches scurrying along its corridors, including commissars under the control of a so-called special counsel who’s destroying America’s rule of law. And all this with kneejerk media encouragement and approval — unconstitutionality as we’ve never seen in the U.S. before, by forces that depict themselves as a “resistance” and who argue that Donald Trump’s constitutionally protected presidential actions are a sure sign of tyrannical intent. I suppose we owe an apology to Barack Obama. He knew what he was doing mandating universal mental health coverage.

The most amazing thing, though, is that in the face of such unprecedented cruel and unusual hostility, Trump has nonetheless thrived and delivered on numerous fronts, whether the economy, foreign policy, deregulation, entrepreneurship, the courts, trade and China, and the incompetence of “experts.” He has brought more energy to the executive than any president since FDR, and put it to better use than any president since — okay, we’ll fill in the blank when his second term ends. Best of all, he shows up for work every day, day after day. He never rests, and he’s apparently the first national leader immune from the effects of jet lag. This is a man in his 70s, remember. No one can keep up with him.

As I write, Joe Scarborough has just said Trump has caused more harm to the U.S. than 9/11 did. In the New York Review, which I thought will be the last liberal organ to retain its senses, Garry Wills calls for stepped-up resistance to Trump, because “If we wait until the tyrant kills six million Jews before tyrannicide is contemplated, we are actually facilitating tyranny.”

Thank God for children, the best check on adults who are out of their mind. Our cover this issue is inspired by a number of photos from the White House’s annual take your kid to work day. For all we know, one of the children depicted there belongs to the New York Times’ Anonymous op-ed writer. But what jumps out in those pics — not that the spiteful media has given them any play — is how happy and playful they all are in Mr. Trump’s company and how even more delighted he seems to be to be in theirs. As Dubya might have said, “He’s a good man.”