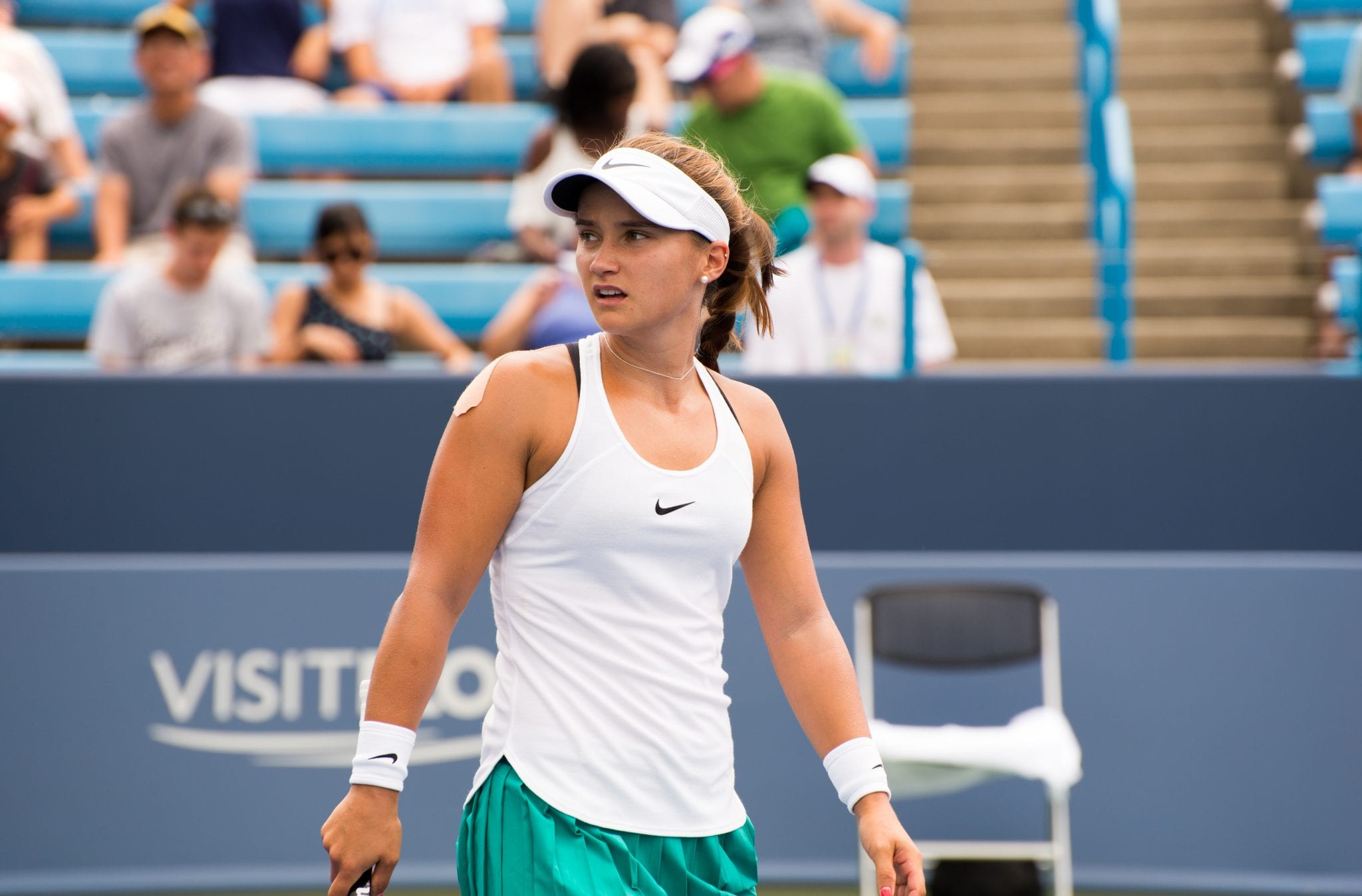 Bjorn Fratangelo beat Ivo Karlović as the Citi Open got under way at the William H. G. Fitzgerald Tennis Center on the edge of Washington’s Rock Creek Park. And to close out the opening night of the first round at Washington’s storied tournament, Lauren Davis knocked out Eugenie Bouchard while conceding only three games.

The 26-year-old Pittsburgh native’s gritty play, on a day that was thick with humid air and heavy with mid-90s temperatures, was characteristic of a strong showing for the red, white, and blue at the storied and steaming-hot tournament, which serves as an important warm-up for the U.S. Open, held at summer’s end in Queens, N.Y.

Christina McHale, who is from Teaneck, New Jersey, kept her wits about her as she battled the higher-seeded Anastasia Pavlyuchenkova, who like many Russians is an émigré (in Nice, France, not Florida like the Siberia native Maria Sharapova, who is not competing here), through three close sets in an early match in the women’s draw. In doubles, Allie Kiick and Sachia Vickery also made it through three sets to overcome their compatriots Alana Smith and Cameron Morra, and Cori Gauff teamed with fellow-teen Caty McNally to demolish the Eastern team of Zarina Diyas (Kazakhstan) and Zhu Lin (mainland China).

It is a game plan characteristic of American men’s tennis today: attack whenever you can; defend only when you must. Aim for the lines, go to the net, never stand still. After years of staying at the baseline and hitting hard and heavy balls, American men are returning to a game of speed and motion and variety. Even such big-serve big men as John Isner and Sam Querrey and the biggest of them, Reilly Opelka, are demonstrating that while you can anchor your game on service aces, you cannot win matches on them alone. This was also on evidence with Tommy Paul’s return to the winning column yesterday after a frustrating year, at the expense of his friend and compatriot Dennis Kudla.

You must be prepared for rallies, and all that goes with them: footwork, shot placement, changes of pace and spin that upset the other man’s game.

Against the 6-foot, 11-inch (and 40-year-old) Karlović, even this might not have been enough for the hard-working Fratangelo. If Karlović does not win the point on his first serve, he goes in toward the net and reaches for whatever comes back at him, and reach is something he has. Fratangelo broke him once in the first set, which was enough, but even the best players find themselves going to the limit against the big Croatian and the match then hinges on a point or two in the last tie-break. Fratangelo pulled it out with resilience and a little luck — Karlović double-faulting on a critical point — but mainly he hung in and worked, relentlessly, to put the ball in Karlović’s most vulnerable spot, his backhand in the backcourt. That is what you must do, if you ever meet him — he is altogether nice and approachable — aim for his left, and repeat.

In the day’s main disappointment for our side, the immensely talented but endurance-challenged Donald Young was outplayed in all areas, serve groundstroke volley, by Wroclaw’s great (and tall: 6 feet, 5 inches) hope, Hubert Hurkacz. This is a source of considerable interest to our fine editor, Mr. Wlady Pleszczynski, always alert to the sports news in the land of his ancestors, but he practices what he preaches, namely the old fair-and-accurate, and he advised against any expression of bias here. Anyway, born and raised in California (still attached to the continent and still in the Union), Mr. P. belongs to the let-the-best-man win school of sport philosophy and only takes a historical, or if you prefer sociological, interest in where athletes hail from.

OK, I’m sorry that Donald, who is from Chicago, lost, and I salute young Hubert, whose big service and gorgeous ground strokes, deep and true, make one think of Juan-Martín del Potro, a past champion here who, sadly, is once again on the disabled list. Notwithstanding he is from Argentina, the man of Tandil is one of the most popular players on the Tour, and deservedly so.

The match of the day, however, if you had to choose, was the doubles between the No. 1-seeded Colombian pair of Robert Farah and Juan Sebastián Cabal and a “Next-Gen” duo made up of the lively Nick Kyrgios and the golden-haired heartthrob Stephanos Tsitsipas. Kyrgios, who is Australian, is of Greek ancestry on his father’s side, and Tsitsipas, though Greek, is kind of Russian on his mother’s side. Tennis is a melting pot. He is all tennis.

The match, played on Stadium Court, raised the question of intimidation. Is it more intimidating to be the world No. 1s in doubles, as Farah and Cabral, champions at Wimbledon just a few weeks ago, can fairly claim to be; or is it more intimidating to be the Tour’s favorite young stars? The latter sure looked like they had the heebie-jeebies at the start and during much of the first set. Only Kyrgios’ serve saved them from a lowly score.

Then the Colombians, after taking the first set with a clear demonstration of mastery of the strategy and tactics required to win at doubles, seemed to get unnerved by the younger men’s verve and energy, the sheer fun they brought to the match. They were broken in the sixth game (better not quote me on this) of the second set and played uncertain tennis for a while, sending seemingly easy (for them) shots from the backcourt long or out of bounds.

Order was restored in the third set, however — a “super-tie-break” that goes to 10 points — as the more coordinated team showed with breathtaking mastery that however talented you are, in doubles you play one game together, not two singles games.

Without doubt, on pure talent you would be hard put to say who was tops. Apart from having perhaps the best serve in the contemporary game, Kyrgios is an all-around athlete who can do just about anything with his racquet, when he wants to. Tsitsipas is a baseline power player, but he is fearless in attacking the net and does so repeatedly, with big overhead smashes that put the ball in the upper bleachers of the grand stadium, known for its intelligent design (“good view from every seat” is the advert).

Against this, Cabral and Farah both have effective serves and resilient, smooth groundstrokes that can maintain rallies against the best baseline players. But they are doubles men, and what sets them apart from the rest is their absolutely uncanny ability to cover the entire court while finding holes on the other side — which, when you think about it, figures. Their play at the net is not only jaw-dropping, as is Kyrgios’ or Tsitsipas’, it is also supremely adroit. Soft hands or smash, drops shot or put-away, they know exactly what to do with each volley they take at the net.

To say it was never really in doubt who would win this match would be to miss the point. In tennis almost anything can happen, and Farah-Cabral might very well have lost. But though it would have been due, for sure, to the exuberant power and skill Kyrgios and Tsitsipas sustained through the match, it would also have been because of their own faltering. They would have felt outmatched after that second set and let their guards down in the tie-break.

Therein is the mental side of tennis. They did not think they were outmatched; they thought of how to outmatch their opponents. And they did just that, by doubling down on the coordination required of this game, ending the points in ways that left their opponents befuddled and shaking their heads as if to say, how did they put it there?

They put it there because they meant to, and, to the extent you can say this of a game that is almost as fast as squash, they planned to. Later on the same stadium, Florida’s marvelous, tiny Lauren Davis, who is a backhand-hitting whiz with the movements of a ballerina, never gave Canada’s Eugenie Bouchard a break as she closed out the day — the night, rather — with another moment of glory for American tennis.

The tournament continues, with wunderkind Cori Gauff in singles action Tuesday, as will be former champion (and sports broadcaster) Sloane Stephens, while on the men’s side Thai-Son Kwiatkowski, fresh from his victory in the qualifying rounds, will face Nick Kyrgios and former presidential candidate Jack Sock, following a long absence due to injuries, takes on Australia’s Jordan Thompson. Local favorite Frances Tiafoe also plays his first match, against a player from Central Asia.

Also on the program: the brothers Murray, as Andy joins Jamie on a quest that could take them in a few days to a meeting with the most successful doubles brothers of all time, Mike and Bob Bryan.