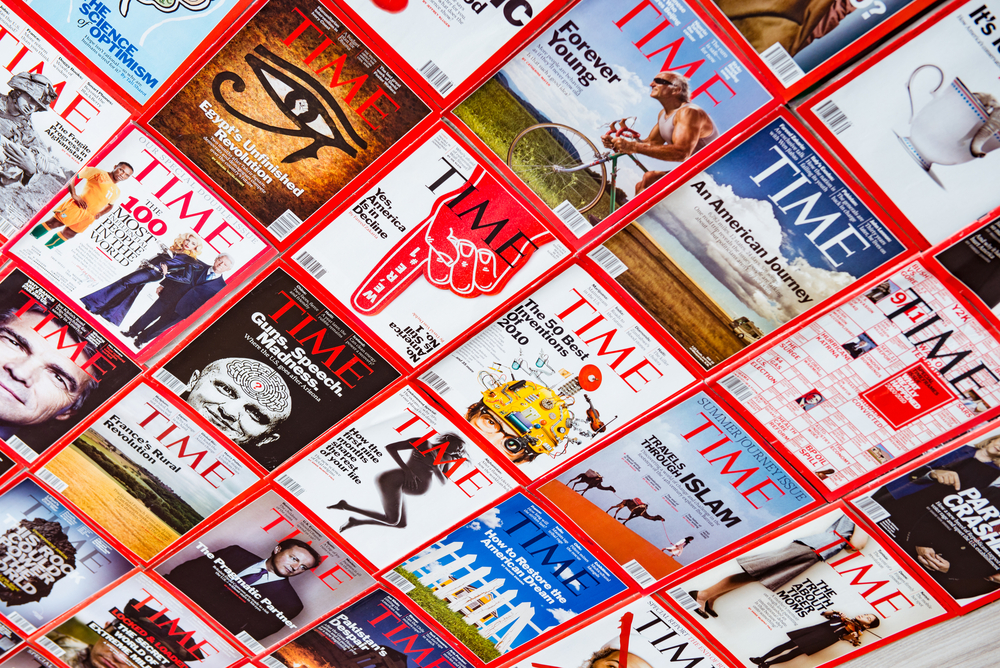 It was inevitable that in the midst of a full-bore attempt to reorder America in accordance with social-justice objectives, America’s left-leaning mainstream media would commemorate Independence Day by trying to shoot down absolutely everything that makes Americans love their country. National Public Radio, which I never listen to, reportedly canceled its “annual July Fourth reading of the Declaration of Independence,” replacing it with what Townhall’s Spencer Brown called “an America-bashing feature asking ‘on this July 4th, what does equality mean?’” Over at the New York Times you could read an op-ed by the president of the Ford Foundation praising social-justice warriors.

And TIME magazine and the Los Angeles Times both ran opinion pieces about how terrible America is. No surprise there. But what was a bit unexpected was that both pieces were by the selfsame author, Sofia Ali-Khan. I’d never heard of her before, but, as will become clear soon enough, she’s gifted at riding the latest sociocultural wave for fun and profit, and will likely go far — at the expense, I fear, of a good many things that Americans hold dear.

Let’s begin with her piece for TIME, “Finding the American Dream in Canada.” It opens with a cozy image of her family’s Muslim life in Ontario: to celebrate Eid, she tells us, she strung a window with “starry lights” that “can be seen twinkling from the street”; in April, she “hung a colorful garland of star ornaments” on the front door for Ramadan. This kind of decorating, Ali-Khan explains, is new to her: back in the U.S., she claims, she was scared to advertise her faith. You see, life in America is an absolute nightmare for Muslims — bullying in schools, discrimination in health care, profiling at airports. Canada’s not heaven either, but at least its government acknowledges that Canada is “a colonial project that must be actively undone.” Canuck schoolchildren learn the names of the tribes whose stolen land they live on and are encouraged to think about “what debt they might owe” to those tribes’ descendants. By contrast, the U.S. “minimize[s] and den[ies]” its colonial past.

Ali-Khan is yet another professional racism scold who’s out to tap into the same segment of the book market — i.e., demented lefties who can’t read enough about how racist they are — that’s made Robin DiAngelo and Ibram X. Kendi rich.

Hogwash. American kids learn plenty about Indians, slavery, racism, and so on. The main difference between the two countries in this regard is that even though critical race theory and the 1619 Project have made some serious inroads in the U.S., Americans are still at least somewhat more hesitant than Canadians to place ethnic, racial, and tribal identity at the heart of absolutely everything and to label their own progeny as victims or oppressors based on stuff that happened 200 years ago.

Ali-Khan’s July 4 piece in the L.A. Times makes exactly the same point as her TIME screed. She recalls that when she was a girl growing up in small-town Pennsylvania, her parents, former Pakistani peasants, praised the U.S.A. without surcease: thanks to its “great generosity,” these two people who’d “grown up cooking over coals and writing their lessons on slates with chalk” now lived in a gorgeous home in safe, pleasant surroundings. Her teachers and schoolbooks also extolled American life. And nothing she experienced in her own childhood, one gathers, contradicted what she was told.

But then she grew up. Working as a public-interest lawyer, she witnessed the cruelty of American segregation and poverty. Somehow she’d gotten through childhood without ever being aware of racism, but now she saw it everywhere, and came to realize that America had been founded on racism, was still drenched with racism, and was in danger of becoming even more racist. Also, she was now a mother, and she understood that if she continued to bring up her children in America they’d face “unrelenting hostility” from white people. How did she know this? Well, it was 2016, and when she expressed concern to her 6-year-old daughter’s teachers that the upcoming presidential election might go the “wrong way,” the teachers “looked uncomfortable, even a little hostile.” Good heavens, they were Trump voters — i.e., bigots, racists, haters!

To be sure, there was one teacher in the school who was Muslim, and one day Ali-Khan’s daughter started chatting with her about celebrating Ramadan. “We don’t talk about that at school,” the teacher replied. Was she exhibiting an overzealous but essentially liberal-minded devotion to the separation of church and state? Not in the view of Ali-Khan, to whom it’s obvious that the woman was communicating “that the school was not a safe place to be Muslim.” So Ali-Khan and her family moved to Canada. She misses the U.S., but deplores the fact that, unlike Canada, it has “no principle of reconciliation to amend our Constitution, no plan for reparations, no legislation that guarantees multiculturalism or decolonization.”

Who is Sofia Ali-Khan? Her contributor’s notes at both rags identify her as the author of a brand-new tome, A Good Country: My Life in Twelve Towns and the Devastating Battle for a White America — pub date July 5 — so both of these pieces are by way of publicity for her book. Some quotes from its prepub reviews: “An effective demonstration of how nearly every area of the U.S. continues to be infected by racism and inequity.” “An exploration of the racism and economic exploitation at the center of the American myth.” “Far from being confined to the pages of history books, American racism is mapped out in our roads, in our churches, and in our cities, schools, and strip malls.” In other words, Ali-Khan is yet another professional racism scold who’s out to tap into the same segment of the book market — i.e., demented lefties who can’t read enough about how racist they are — that’s made Robin DiAngelo and Ibram X. Kendi rich.

Is there really racism in America? Some, sure. But it’s all relative. In her L.A. Times essay, Ali-Khan mentions that she’s visited her parents’ Pakistani hometown many times. What she omits to mention is that their native land is one of the most racist on Earth, and the U.S. one of the least. And yes, there’s poverty in America. But American poverty is an entirely different phenomenon than poverty in most of the rest of the world. Nowhere, moreover, are blacks more prosperous than in America, which is also the only white-majority country to have elected a non-white head of state.

In her L.A. Times essay, Ali-Khan mentions Trump’s so-called “Muslim ban,” which of course wasn’t a “Muslim ban” but a thoroughly reasonable (if politically incorrect) proposal, in an era of rampant Islamic terror, to regulate travel from hotbeds of terrorism. But let’s say, for the sake of argument, that it was a Muslim ban: how, I’d like to ask this passionately pious Muslim, would even the strictest such ban compare to the treatment of Christians, Jews, Buddhists, and Hindus in any number of majority-Muslim countries, where the mot juste isn’t prejudice but persecution — and, not infrequently, murder or massacre? Needless to say, Ali-Khan doesn’t address such pesky little details in her Fourth of July essays, because she’s out to depict Muslims purely as victims — specifically, as victims of an irrational and ugly racial prejudice rooted in the profoundly flawed American character.

I’ve mentioned Ali-Khan’s contributor’s notes. One detail that they leave out, but that can be found on her website as well as the website of her publisher, Penguin Random House, is that Ali-Khan “was a founding board member and activist with the Philadelphia chapter of the Council on American Islamic Relations (CAIR).” If her publisher is willing to include this damning detail in her bio, it’s because CAIR is still viewed by America’s clueless left-wing cultural establishment as a legitimate civil-rights organization. In fact, there are mountains of evidence showing that CAIR is a terrorist front organization: it grew out of the Islamic Association for Palestine, which handles PR and recruitment for Hamas; its seed money came from the Holy Land Foundation (HLF), which the U.S. shut down for funding Hamas; several of CAIR’s founders have acknowledged that they dream of an America under sharia law and have been prosecuted for their terrorist connections.

One of CAIR’s principal activities is grotesquely exaggerating the scale of anti-Muslim activity in the U.S. while downplaying (or excusing) Muslim mayhem; this is clearly consistent with Ali-Khan’s modus operandi. That she’s plainly still on good terms with the folks at CAIR Philadelphia is demonstrated by the fact that today, July 6, along with the American Friends Service Committee and various units of Haverford College and Swarthmore College, they’re co-hosting her book launch.

If Ali-Khan’s Fourth of July articles make it clear that she seeks an end to America as we know it, her intimate association with CAIR strongly suggests that she wants to replace it not with the kind of peaceable kingdom suggested by the Christmas-card image of her holiday-lit home, but with a sharia state in which no lover of freedom would feel remotely safe or happy. Simply put, she’s an enemy of everything that’s good about the United States; her parents fled to America only to produce a daughter who wants to make America more like the hellhole they fled. And these days, alas, the kind of perniciously anti-American bilge that she produces is precisely what major publishers like Penguin Random House want to publish, what fancy colleges like Haverford and Swarthmore are eager to promote, and what the more despicable of our mainstream media — including Time and the L.A. Times — are doing their damnedest to install as a new national orthodoxy.