You can always tell a Harvard man but you can’t tell him to not grope a sleeping woman.

“I couldn’t believe it,” model Leanne Tweeden writes of an unpleasant experience with Senator Al Franken during a USO tour of the Middle East. “He groped me, without my consent, while I was asleep.”

A picture tells a thousand words. The one shared by Leeden shows Franken caught red-handed. A grinning Franken with blushing hands reaches out to grab Leeden’s chest as she sleeps in a C-17 plane.

“I don’t know what was in my head when I took that picture, and it doesn’t matter,” Franken noted in his apology. “There’s no excuse. I look at it now and I feel disgusted with myself. It isn’t funny. It’s completely inappropriate. It’s obvious how Leeann would feel violated by that picture.”

Several Democratic colleagues, eager to make hay of similar accusations lodged against Republicans, initially remained mute until Franken gave them the green light by calling for a thorough investigation of his behavior. Matthew Dowd of ABC News celebrated Franken and used the controversy to attack — who else? — Republicans: “This is the statement of a man. A man who has the courage to admit his own mistakes and want to do better. Why can’t Roy Moore be a man?”

Though such pranks commonly take place in the military — upon developing the pictures from a disposable camera that had mysteriously gone missing during a late-’90s Fort Stewart training exercise I came upon several extreme close-ups of the privates of privates, corporals, and sergeants — the tasteless humor, done for a laugh and not sexual gratification, takes place exclusively among men. A mean-spiritedness characterized Franken’s attempt at humor — something that characterizes much of his scowling comedy — according to his victim, who tells of the former Saturday Night Live player giving her a hard time after she reacted negatively to forcing a kiss on her.

Franken never served in the military. He does boast veteran status in Hollywood and Washington, two places where powerful mean use their position to bully sexual favors. Of greater relevance, Franken (Harvard ’73), graduated from a (then) single-sex Ivy League school where the diplomas grant recipients a sense of entitlement.

On Saturday, 30,000 or so people with a similar background gather in New Haven, Connecticut, to ostensibly watch football but really to partake in a mass demonstration showing that the rules do not apply. Every year, like an anthropologist, I attend the Harvard-Yale game to take in entertainment in the stands as much from the field.

Graduates of PCU flaunt ankle-length fur coats passed on from earlier Ivy Leaguers. The fans bill Scotch and down beers in public. They chant “Safety school” at the opposing grandstand to signify their privileged status. Best of all, when the fourth quarter rolls around, Yalies — at least in Harvard Stadium — disrobe without threat of arrest or even much harassment from security. They mill around, completely naked, without fear of repercussion — now or thirty years hence when they serve in the U.S. Senate. 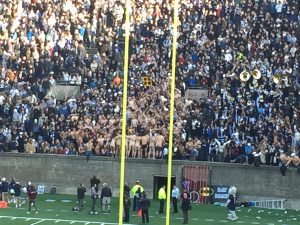 Perhaps it might serve society better to take as laid back an approach to such indiscretions as the security in the Yale Bowl and Harvard Stadium does. Rather than an excuse to call the Fun Police, the behavior merely highlights the do-as-we-say-not-as-we-do attitude of elites. Al Franken, a critic of the behavior of Republicans in 1980s shopping malls (back when they were Democrats) and their decade-old locker-room talk on studio lots, surely exemplifies this mindset.

Along with the folded paper handed out on graduation day, Harvard Men receive an immunity pass. The pass effectively says, “I’m from Harvard, so I can make racist, sexist, and homophobic jokes because of course I don’t hate blacks, women, or gays.” Presumably, most people who engaging in off-color humor do not hate their punchlines even when they cross the line from joker to jerk. But elites insist that they do — unless their kind tell the joke.

Franken used the pass when he told the Harvard Crimson in 1976: “I just don’t like homosexuals. If you ask me, they’re all homosexuals in the [Hasty] Pudding. Hey, I was glad when that [Hasty] Pudding homosexual got killed in Philadelphia.” He used it again when he joked about Andy Rooney raping Lesley Stahl.

The pass ran out when he played beast to sleeping beauty.