I’m so old that I remember when Jonah Goldberg was primarily known for writing an excellent political book. Liberal Fascism, which came out in 2009, skillfully skewered the modern Left for its illiberal, statist tendencies.

One wonders if Goldberg shouldn’t reread his famous tome. Perhaps he’s repudiated it. He seems so determined of late to make himself useful to the people he once castigated.

There’s a certain brand of weak-sauce conservative pundit, many of whom have populated the airwaves of cable news channels and other corporate media venues, which depends for its sustenance on remaining “acceptable” to those who are not conservatives. This brand has for two decades or more been recognizable by its willingness to make The Conservative Case for virtually every kind of leftist policy aggression.

And for its constant scolding of others within the Republican Party or conservative movement.

For a time, that Mean Girls repertoire was defensible, in that the Right could supposedly boast of better quality control than the Left. Political figures and culture-makers on the Right were held to a higher standard, and the Right’s self-policing, we were told, kept the conservative movement closer to the center.

But meanwhile, the scolds and “acceptable” conservatives who populated our media and cultural institutions were so busy picking up checks and seeking to please decision-makers who didn’t agree with them that they failed to fight for those institutions.

All of which have become so hostile not just to conservatives but to ordinary Americans that we’re no longer even welcome there.

It was inevitable that such figures would eventually lose currency with their core audiences when the situation turned sour enough. And in 2016, the American people turned on first the Republican status quo political class, which includes its pundit class, and then the political class at large, by making Donald Trump the president.

There’s a direct line between that event, which was wholly predictable, and the announcement over the weekend that Goldberg and Stephen Hayes, the former editor of the now-defunct Weekly Standard, have ejected from paid contributor gigs at Fox News over Tucker Carlson’s documentary about January 6.

Goldberg and Hayes are founders and proprietors of the Dispatch, a middling site offering Never Trump-style conservative political analysis which has existed basically since the demise of the Weekly Standard in late 2018. Goldberg’s main outlets to the public have been Fox News and his syndicated column based out of the Los Angeles Times. Nobody really reads the Dispatch.

And why? Because the public has moved on from Jonah Goldberg and Steve Hayes. And David French, another Dispatchik formerly occupying a high place in the conservative pundit class. (READ MORE: David French: The ‘Principled Conservative’)

We’ve moved on from corporate-funded “acceptable” conservatism, and we’ve moved on from allowing the Left’s paid liars — who showed us exactly who they are in the Kyle Rittenhouse case, and before that, the Trump-Russia debacle — to define what we’re entitled to believe.

Tucker Carlson, who of all the analysts and opinion-makers on the Right probably has the best handle on the current mood of the movement, is a great example of that. To boil Carlson’s brand down to its essence, he looks upon the American political status quo with deep dissatisfaction and is willing to skewer every element of its foundation from the perspective of someone who understands what the country is supposed to be — an open, Judeo-Christian society where markets are free, corruption is shameful, and power is given very little trust.

It shouldn’t have been much of a surprise, then, when earlier this month Carlson produced a three-part documentary titled Patriot Purge, covering the events during and following the January 6 protest at the U.S. Capitol, which is available via the Fox Nation streaming service and has not actually aired on Fox News itself. Two main themes emerge from the documentary series: first, that there was a governmental role in fomenting the January 6 protests into something which could be weaponized against those viewing the conduct of the 2020 presidential election suspiciously, and second, that the treatment of the people who entered the Capitol on that date, most of whom have never been charged with insurrection or treason but rather with various kinds of trespassing or minor property crimes, has been wholly out of proportion with their offenses.

You can see January 6 as a black mark on our national escutcheon and nonetheless concede Carlson’s basic points are valid.

The documentary should have generated discussion. But on the part of Goldberg and Hayes, the opposite occurred. They took their balls and went home.

The special — which ran on Fox’s subscription streaming service earlier this month and was promoted on Fox News — is presented in the style of an exposé, a hard-hitting piece of investigative journalism. In reality, it is a collection of incoherent conspiracy-mongering, riddled with factual inaccuracies, half-truths, deceptive imagery, and damning omissions. And its message is clear: The U.S. government is targeting patriotic Americans in the same manner — and with the same tools — that it used to target al Qaeda.

“The domestic war on terror is here. It’s coming after half of the country,” says one protagonist. “The left is hunting the right, sticking them in Guantanamo Bay for American citizens — leaving them there to rot,” says another, over video of an individual in an orange jumpsuit being waterboarded.

This is not happening. And we think it’s dangerous to pretend it is. If a person with such a platform shares such misinformation loud enough and long enough, there are Americans who will believe — and act upon — it.

One gets a clear image of a young Kevin Bacon in an ROTC uniform, nervously screeching “All is well!” as chaos unfurls around him, from this statement of resignation. The attorney general of the United States of America is now training the FBI’s eyes on angry parents at school boards while lying about it to Congress, and an idiot in a Viking helmet who trespassed at the Capitol was just sentenced to 41 months in prison by a supposedly responsible federal judge, and these two has-beens think there is nothing to question?

Let’s remember that the Dispatch, and Goldberg specifically, echoed the false claim that Capitol Police Officer Brian Sicknick was bludgeoned to death on January 6. Who is he to castigate Tucker Carlson for questioning the “acceptable” January 6 narrative?

And one also gets an image of the suits at Fox News passively shrugging their shoulders. When were Goldberg and Hayes coming up for contract renewals at Fox, anyway?

The fact is, Tucker Carlson is the only member of the corporate media willing to challenge the “acceptable” narrative of January 6, something anyone willing to objectively analyze recognizes is full of lies. And the fact that rather than defend that narrative against Carlson’s challenge in the public square, Goldberg and Hayes instead commenced a virtue-signaling retreat, is yet another example.

But it’s fine if they’re not willing to debate January 6. Most of the people who used to pay attention to Goldberg and Hayes don’t care what they’ve got to say anymore. And if they’re gone from Fox News, that means somebody more relevant might replace them.

Let’s hope that somebody is less “acceptable” and more willing to accurately assess the state of America brought on by two decades of weak-sauce conservatism’s constant retreating.

As for Carlson, well, he isn’t so upset about the weekend’s events… 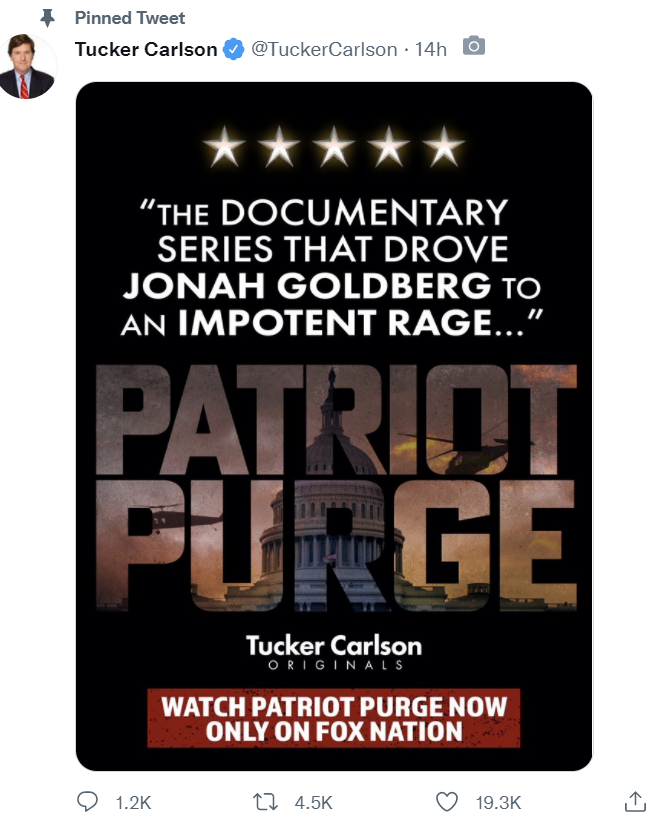