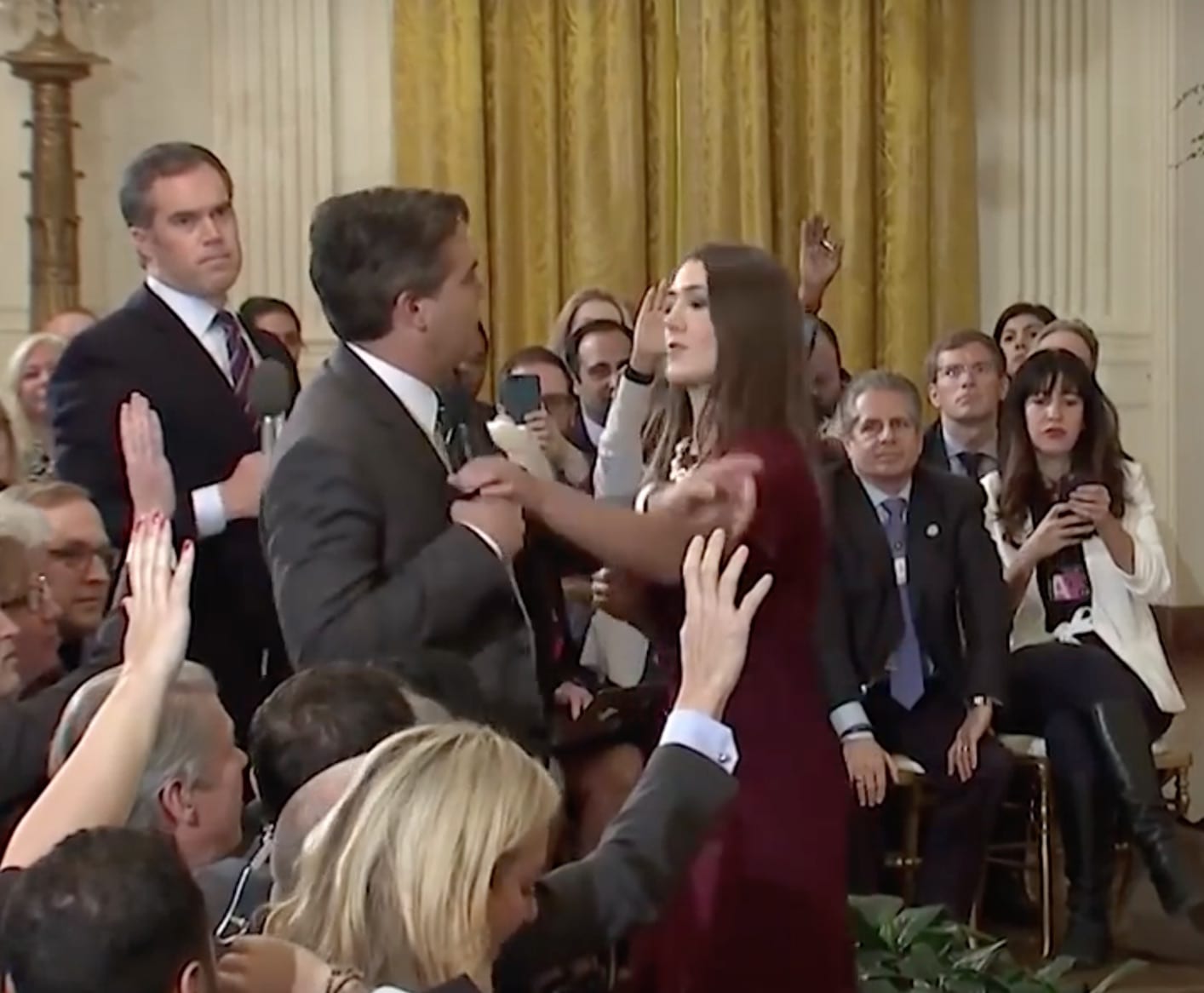 You must first watch this brief one-minute video clip. You must! It is Jim Acosta, crack CNN Trump-hater, appearing in the rare venue from which no one is seeking to throw him out. He is walking along a steel-slat barrier/wall/fence/mechitzah/barricade/rampart along our southern border. As he walks, facing his trusty cameraman, he endeavors to prove that President Trump’s call for such a wall is ridiculously wrong and exaggerated. Showing his viewers why the President apparently is making a mountain out of a molehill, Acosta explains why a border wall like that one is wasteful. In Acosta’s words:

“And here are some of the steel slats that the President’s been talking about, uh, right here.… As you can see, yes you can see through these slats to the other side of the U.S.–Mexico border. But as we’re walking along here, we’re not seeing any kind of imminent danger. There are no migrants trying to rush toward this fence.… no sign of the national emergency that the President has been talking about. As a matter of fact, it’s pretty tranquil down here.”

In his and CNN’s haste to mock the President’s demand for a $5.7 billion Congressional budget allocation to expand the wall whose construction began at the Mexico border at San Diego, Acosta unwittingly and witlessly failed in his attempt to be witty. He was right in part: There was no border crisis, no emergency, no imminent danger of caravan Illegals storming the border at that spot… because, uh, there was a wall of steel slats. Consider other planned “Acosta-on-the-Scene” segments that CNN may be airing later this week:

1. “Hi, I’m Jim Acosta here at Donald J. Trump National City Bank. Recently, the bank’s board of directors decided to allocate money to hire an armed guard to protect its facility. This news disturbed local residents who oppose the Second Amendment, half of the First Amendment, three quarters of the Fifth Amendment; and all of the Ninth Amendment except on rainy days when they need the penumbra. Here I am at the bank, and you can see the guard standing alongside me, packing an Uzi submachine gun and a Howitzer. But now follow me and notice: no one is trying to rob this bank anyway. It is a safe bank. A safe neighborhood. As a matter of fact, it’s pretty tranquil down here. No sign of any imminent danger. You can see it yourself as the camera pans the bank. The armed bank guard arrived three months ago, and coincidentally the place never has been quieter than it has been these past three months.”

2. “Hi, I’m Jim Acosta here at the home of Ivanna B. Leftalone. Thank you, Ms. Leftalone, for allowing our CNN crew to come in and film inside your home. After several recent break-ins at the Leftalone home, Ivanna’s former husband insisted five months ago on purchasing a home alarm system for her and a wildly crazy barking mad dog whom they have nicknamed ‘Mattis-Yahoo.’ News stories reported that the ex-husband and his former wife had a falling out over his insistence on providing these security enhancements for her. And I have to say, from what we at CNN are seeing as we walk along the home’s interior — uh, excuse me, ma’am, your dog just bit me; does it have rabies? — but what we are seeing is that no one is trying to break into this house. As a matter of fact, it is pretty tranquil here. I am told that there have been no break-in attempts here for, what, five months. Clearly, there is no imminent danger. Uh, ma’am, do you have some gauze pads?”

3. “Hi, I’m Jim Acosta here at Fort Donald J. Trump Prison, where this maximum-security facility installed $10 million worth of new equipment and reinforced bars and doors seven months ago to prevent prison breaks. This recent expenditure generated quite a stir in the state capitol. We are here to see whether the new bars and doors really were needed. And as you can see, no one here is trying to break out now, and no one has tried doing so, I am told, for the past seven months. No imminent danger of anything like that. As a matter of fact, it is pretty tranquil here. So we are sad to say that the money did not need to be spent.”

4. “Hi, Jim Acosta here at Donald J. Trump High School in San Francisco, the scene of a tragic shooting two years ago. Among the enhancements that the school undertook after the national tragedy, it installed security cameras, metal detectors, and an armed guard. The cost of all these enhancements was so great that California had to cut back on its plan to provide a free daily MRI, six years of free college tuition, and nine years of free medical school tuition to every illegal alien in the state. We of CNN are here on the scene to see whether those security-enhancement expenditures really were justified. As we walk along the school interior, and you can see what we can by watching this video we are shooting — uh, that is, video we are filming, not ‘shooting’ (sorry!) — we see no sign of any armed shooter, and in fact we are told that no such person has been seen here since the security enhancements were installed. Again, I am so sorry to report: a complete waste of money. And just think of all that MRI equipment now lying unused — although I will say that San Francisco’s city council, in the meantime, is allowing its homeless population to sleep in the machines and to urinate in them instead of on the sidewalks. But, again, the cost of those security enhancements have come at the expense of worthy Illegals, coercing the state’s colleges and medical schools these past two years to admit additional legal California taxpayers into their student bodies. It is painful to watch and to report, as Illegals here now routinely are denied their entitlement to a free California undergraduate and medical-school degree and instead have been forced into an underground economy of trading in the state’s black market for plastic straws and bags.”

5. “Hi, Jim Acosta here along the new Donald J. Trump Dam right here in Florida, constructed to prevent a recurrence of serious hurricane flooding disasters. There was great debate as to whether such an expensive undertaking was needed, whether a new, larger, stronger dam had to be built at the expense of bolstering the refreshment stands at Miami’s Hard Rock Stadium, where hometown Dolphins Arian Foster, Jelani Jenkins, Kenny Stills, and Michael Thomas kneel from time to time. I am here with our CNN crew, walking along the dam’s perimeter, and I have to report — and you can see this with your own eyes — that the dam seems to have been a complete waste of money. Local officials here tell me that since the dam was built, there have been no floods at this site. Again, a complete waste of money. Or, because I am clever: A dam waste of money! Get it? A dam waste of money?”

6. “Hi, I am Jim Acosta here at the Donald J. Trump Pizzeria in Little Italy, down in Manhattan’s Lower East Side. Recently, the owners hired an exterminator for the preventive purpose of assuring food safety and health by spraying for insects, rodents, and MS-13 animals. The exterminating caused quite a controversy here where local organic-food activists, under the banner of “Mindfulness Now!” protested the facility’s indoor chemical spraying, arguing that it interferes with the organic nature of allowing insects to survive as an endangered species. Here I am with my CNN crew walking along the perimeter, and I have to say — and you can see this with your own eyes — I don’t see a single ant, spider, or what they call the “Manhattan Special”: any cockroaches. So it does appear quite evident that there was no need for the exterminating.”

The man is a schmendrick.

For all the arguments that have been made for a wall along our southern border, none is more compelling than the film footage and accompanying acoustics where Acosta is not accosted accordingly, despite that to which he is accustomed. The place is quiet. Tranquil. No imminent danger. Because the Illegals are elsewhere — where there is no wall. The only Illegals to fear at such a location are those who already have entered from other inadequately protected areas and who now remain protected under the rules of Sanctuary Cities where murderers are protected but users of plastic straws and unauthorized plastic bags must fear law enforcement.