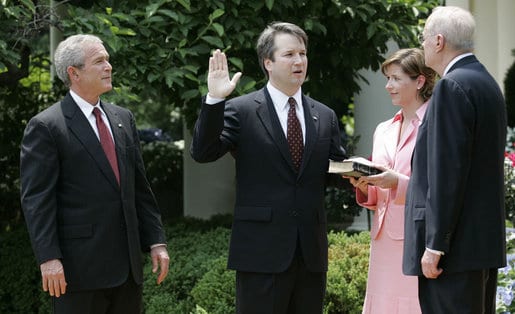 Watching the confirmation hearings for Judge Kavanaugh I was appalled but hardly surprised by the rude and churlish behavior of the Democrats. From interrupting the proceedings some 40 times in the first hour, to Senator Harris using her time to run for President, to Cory Booker’s astonishingly comparing himself to Spartacus (Kirk Douglas must have choked over his coffee when he heard that one), the Democrats demonstrated yet again their indifference to our political institutions through their scorched earth tactics.

A Supreme Court nominee is to be judged by their judicial competency and not their political affiliation. The Republicans have respected that, yet the Democrats have historically refused to do likewise. Case in point, during her confirmation hearings Judge Ginsburg told the body that she was a registered Democrat and considered herself a progressive. Her judicial credentials were impeccable and virtually every Republican voted for her 96-3 confirmation. Both liberal Kagan and Sotomayor were confirmed with substantial Republican support yet conservative Gorsuch received just three Democratic votes.

Since the Democrats trotted out Anita Hill to sabotage Clarence Thomas, they have used political leanings, not judicial qualifications in their voting. Their tactics border on hysteria. Having failed to successfully disrupt the hearings nor challenge Kavanaugh’s competency, the Democrats have returned to their old favorite… character assassination. Facing certain confirmation, the Democrats have come up with their 11th hour Hail Mary, the 2018 version of Anita Hill… Christine Blasey Ford with a 36-year-old claim of an incident of Kavanaugh’s misbehavior as a teenager. Ms. Blasey Ford seems like a nice enough woman and is a Democrat who has contributed modestly to Democratic issues and candidates. Good for her. However, having made these allegations she, at this writing, refuses to tell her story to the Senate hearings. Why not? It is reported that she doesn’t remember where this incident took place, how she got there, or how she got home. The other boy whom she says witnessed the alleged assault says it never happened. So my question to Ms. Blasey Ford is, if you are so sure of your story, where have you been for the last 36 years?

This does not appear to be a “she said, he said” situation. At least for now it is a “she said, THEY said.” Requiring an FBI investigation before she appears at the hearings seems to be nothing more than a transparent ploy to delay the confirmation until after the fall election. If Ms. Blasey Ford has a story to tell, then show up and tell it.

If this ploy of the Democrats works, then what is next? Will the next Trump nominee be confronted with a 45-year-old accusation that while in 5th grade he said to a classmate “I’ll show you mine if you show me yours?” While there is a statute of limitations on robbery, assault, and even 2nd degree murder, there seems to be no statute of limitations on character assassination.