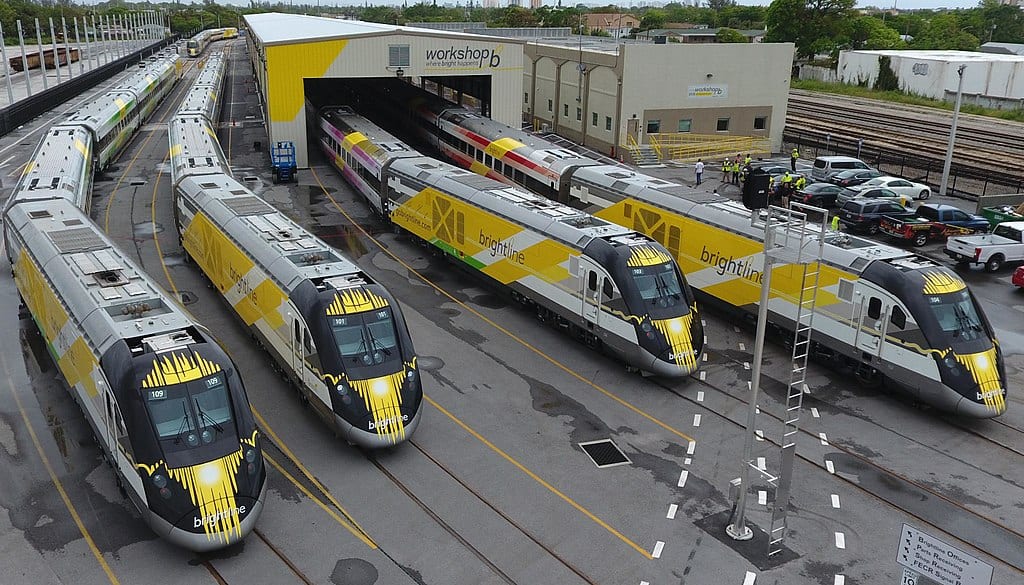 On January 13, 2018, the Brightline high speed rail line began operation in southeast Florida. Currently operating between Miami and West Palm Beach with an intermediate stop in Fort Lauderdale, the system hopes to expand to Orlando and elsewhere by 2021. Trains make 7-8 trips a day on weekdays and 6-7 trips a day on weekends and cover the 78 miles between West Palm Beach and Miami in 1 hour and 15 minutes.

Brightline is an entirely private operation. It does not rely on any government subsidy and its financing is provided through the sale of bonds. This means that in the worst case scenario for Brightline, tax payers will be off the hook for any failures. In the best case scenario, communities served by the rail line will have efficient rail transportation that could potentially spark new development and bring more prosperity to Florida’s east coast.

The current Brightline trains operate on the tracks of the Florida East Coast Railway, a freight line that is owned by Florida East Coast Industries, which is also the parent company of All Aboard Florida, which will operate and maintain the trains. An additional 60 miles of track will need to be built to connect West Palm Beach and Orlando. To make the line compliant with Federal Railroad Administration (FRA) guidelines, FECI has had to upgrade the track and street crossings while also installing a Positive Train Control (PTC) signaling system that is capable of automatically slowing trains if they come too close to one another.

Currently, trains reach a top speed of 79 miles per hour between Miami and West Palm Beach. This is consistent with the top speed allowed for most long distance passenger trains like those operated by Amtrak. Once the Orlando expansion opens, top speeds of 110 and 125 miles per hour will be authorized. This makes it the second-fastest passenger rail system in the United States after Amtrak’s Acela Express (which operates at 150 MPH between Washington and Boston). Rather than relying on electrical infrastructure, which can be costly and time consuming to install, each train set will use two 4400 horsepower 16 cylinder Siemens Charger diesel engines. This means it will be tied with the British InterCity 125 for the fastest diesel train in the world.

What truly makes Brightline unique, however, is that it is completely privatized and all components of the rail line will be under the control of FECI. This stands in sharp contrast to Amtrak, which relies on a large $2 billion subsidy from the federal government. Furthermore, Amtrak does not own the trackage it operates on outside of the Northeast Corridor between Washington and Boston. As such, it is forced to use shared tracks with freight trains owned by railways such as BNSF, CSX, Norfolk Southern, and Union Pacific. Federal law states that passenger trains should be given priority over freight trains but these mandates are rarely enforced and often ignored as freight is more profitable than passenger services. This contributes to Amtrak’s poor on time performance record and shows inefficiencies in the system.

Brightline solves these issues by owning the tracks, trains, and stations on which all of their trains run. Because of this, FECI will be able to give passenger trains priority over freight trains thus ensuring a more consistent on time performance and smoother ride for customers. Furthermore, Brightline will have more control over its schedules, giving it a better chance to expand services on already existing tracks in the future. Because all aspects of running the rail line will be consolidated under one company, it will be more efficient and easier to make decisions that benefit both passengers and service providers.

Rail experts agree that train travel is the most efficient way of traveling distances that are between 200-400 miles. Air travel is inefficient at such distances (and an invasive TSA body cavity scan is never fun) and driving them can be challenging for some. Trains can whisk people from city center to city center at high speeds, thus saving the need to travel to and from airports on the outskirts of town. If Brightline succeeds (which appears likely with initial ridership being three times higher than expected), it will change the way passenger trains are viewed in the United States and set a new standard for intercity rail.