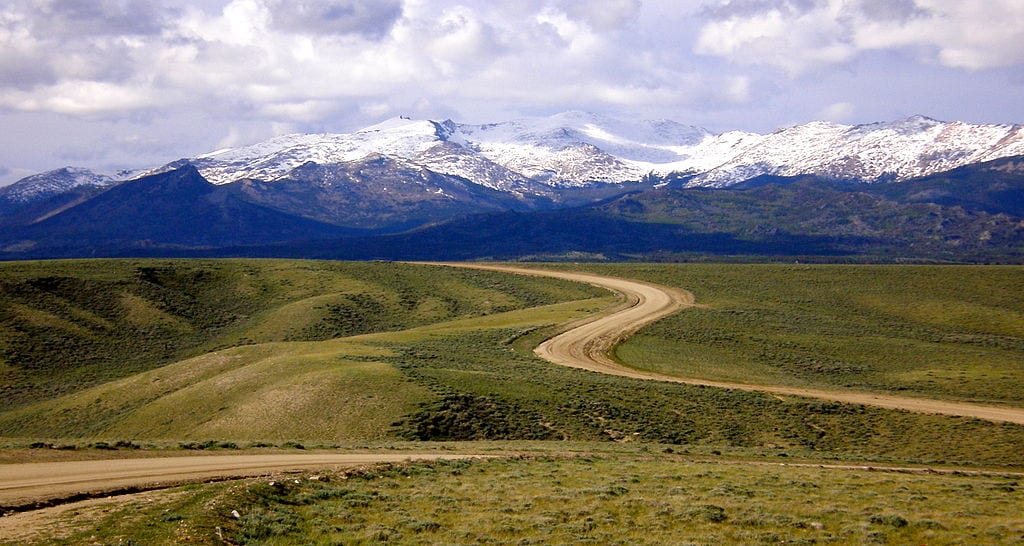 We were on the headwaters of LaBarge Creek, at some 8,000 feet of elevation, in the Bridger-Teton National Forest of Wyoming. We’d driven south from Jackson. It took a couple of hours by the clock, but it seemed we’d come much, much further in spirit.

The gravel road that ran up from the highway seemed to transport you in time as well as in distance and elevation. The air grew colder and tasted cleaner the higher we drove. And it felt, somehow, like we were leaving the present behind us and going back a century and more.

Lodgepole pine grew in dense stands in the lower stretches but thinned out as we got higher until we finally reached the stream. Aspen and willows grew along its banks and the water was clear and shallow and sparkling in the late afternoon light. With the exception of a young bull moose that lowered its head and threatened to charge our little SUV when we came around a bend and surprised it, we had the place to ourselves. When you were out of earshot of the stream, you were aware of this epic silence. You could hear it.

The fishing was fine. We caught and released several small Colorado cutthroats and then began looking around for a good place to put up the tent and spend the night.

“What do you suppose that is?” Marsha, my wife, said. She has good eyes and takes in everything.

“That. Just up the hill. There is some kind of fence around that tree. What do you suppose it’s for?”

So we walked up a gentle incline, deeper into a wide meadow to where a Douglas fir stood, looking old and solitary and lonely. There was a rough fence around the tree. The space it enclosed was not large enough to make a proper corral. But it was well maintained, so it had to serve some kind of purpose.

When we got a little closer, we could see one of those markers you find on historic sites. Hard, I thought, to imagine what kind of monumental event could have taken place in this empty country. When you looked out at the land below where the mountain fell off, there was nothing to see but more of the same: timber and meadow and no sign at all of civilization.

Curious. And a little spooky.

The marker, though, explained it all. This was the grave of a woman named Elizabeth Paul. She had died not far from here 150 years ago, shortly after giving birth to a baby girl. The people she was traveling with on this stretch of the Oregon Trail, which was called the “Lander Cutoff,” had taken the time to bury her in this lovely, lonely spot. They had prayed for her, and then they had resumed their journey west. They had already been on the trail for three months — since April, and it was then mid-summer. They had more miles to go and more mountains to cross before they would reach their destination. More hardships and more tragedies to endure. It is estimated that one in 17 of the people who started out on the Oregon Trail died along the way.

Those dead included Sarah Paul’s infant daughter. She died a week after her mother. The party, which had moved on into Idaho, stopped long enough to bury the girl, pray over her, and then push on. The site of her burial, further along the trail, is unmarked since its precise location is unknown.

Marsha and I lingered at her mother’s grave for a while. Longer than we needed just to take some pictures. There was something almost epically tranquil and reassuring about it. Reassuring in a theological way. You die, and the others move on. You have no choice. Winter will be coming soon, and if you are stranded in the high country, you will freeze and starve. But you make time enough to dig a proper grave and perform the appropriate rituals.

Someone in Elizabeth Paul’s party remembered the words of an epitaph he had copied in his diary. He read the words over the grave, then left the pages at the site, where they were found a few days later by another party passing through:

Friends and physytions could not save
This mortal lovely body from the grave
Nor can the grave confine it here
When God commands it to appear
For tho it was her lot to die
Hear among the mountains high
Yet when gabriels trump shall sound
Among the blessed she will be found
And while she rests beneath this tree
May holy angels watch and see
That naught disturbs her peaceful day
Until the dawning of the day.

Elizabeth Paul’s husband and surviving children made it all the way to Washington, where he remarried and started another family. He died in 1904.

I hadn’t thought about that day in the mountains much these last few years. Lately, though, I cannot seem to get it out of my mind.