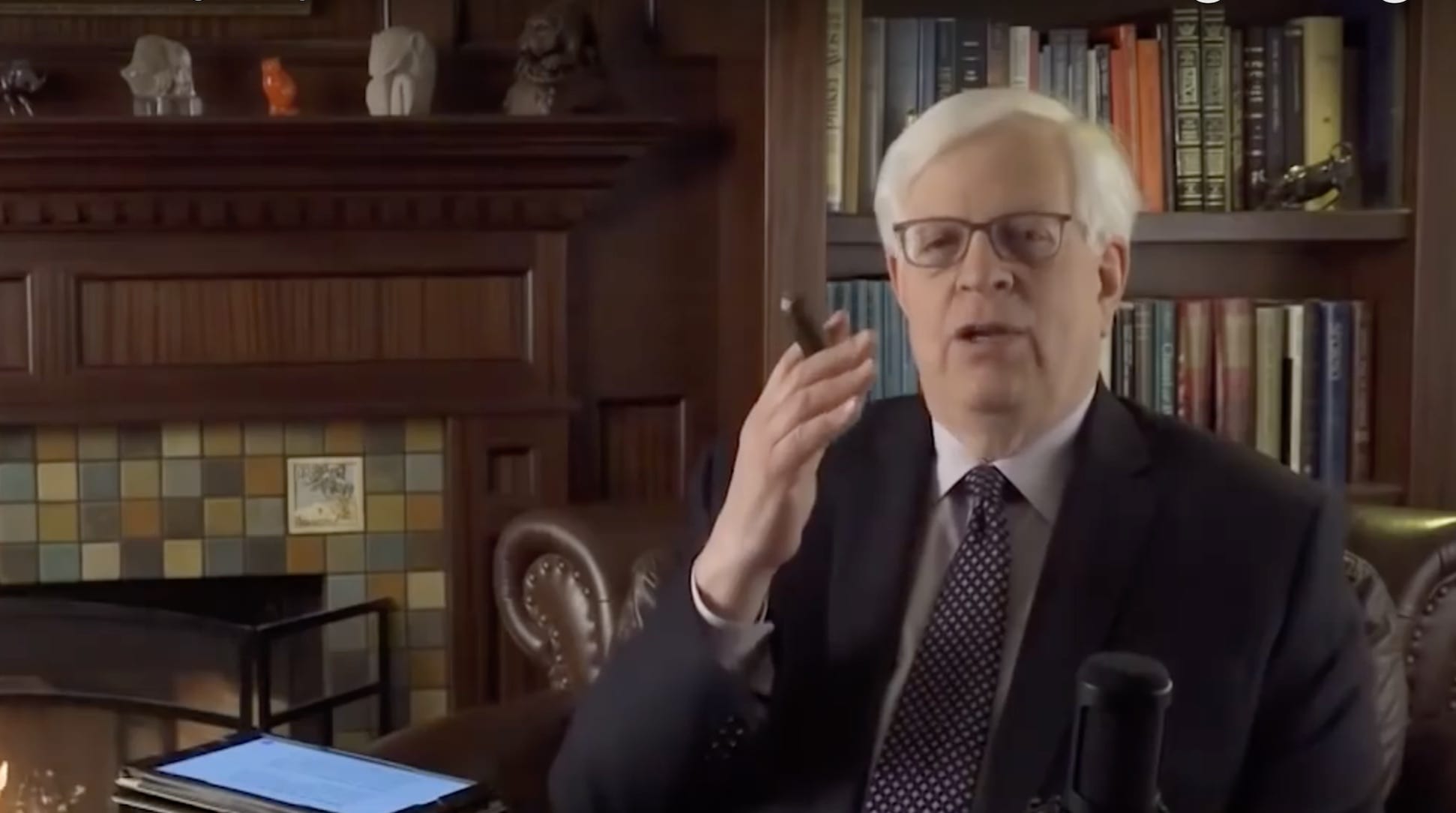 Dennis Prager is easy to listen to. Relaxed, knowledgeable and witty, articulate, engaging, not overly impressed with himself. And of course he’s an active and solid conservative, right on the major issues of the day and willing to travel just about anywhere to engage with an aggressive political and cultural left which is punching above its weight just now and threatening to turn the republic into the Disunited Soviet States.

Of course I’m speaking of the columnist, talk show host, author, Prager University founder, conductor of symphony orchestras, and touring conservative troubadour. That Dennis Prager. Many of his defenses of conservatism, religion, and traditional American values take place during appearances on college campuses, for which he deserves the forensic purple-heart with any number of oak-leaf clusters. But Thursday night’s Tampa séance took place before a friendlier audience. The site was Davidoff of Geneva, an upscale cigar lounge. I suspect the appearance was advertised only on conservative talk radio stations as no protesters showed up to disturb the peace and interfere with the congeniality of the evening.

The site was likely chosen because Prager likes fine cigars, and a first-rate stogie came with the price of admission. (I’ve always liked the smell of a good cigar, though I’ve not smoked them in decades as every woman I’ve ever wanted to spend time with hated them. I fear if I lit up today my bride would pack my things and put them on the front steps.) Most everyone fired up the complimentary cigar. This soon turned the air thick and blue, demonstrating, as Dolly Parton has before, that there can be too much of a good thing. The bad news — or at least unsettling to many guys my age — is that not all of the cigar smokers were men. But at least everyone who had a tattoo was. But I digress…

There were no surprises in the topics that Prager chose to talk about. Though this didn’t trouble the hundred or so who turned out to hear him, most of whom I learned in pre-event conversations were regular listeners to Prager’s radio show. He deconstructed the many attack points the left uses in its unflagging attempt to, as a recent public figure put it, fundamentally change America. He spoke, as he so often has, about the necessity of religious belief to any lasting morality. One can be a conservative without being religious. But it’s tricky, as what is right and wrong can only be based on what one thinks it is on any given day.

As one would expect in such an informal event — Prager answered questions and responded to audience comments during his presentation — the subject under discussion hopped from here to there in somewhat less than a straight line. Some takeaways in no particular order:

In his remarks about the importance of religion and the centrality of family, Prager bemoaned the increasingly familiar phenomena of family members, including parents and children, falling out over politics. “I’m Jewish and born in Brooklyn, so on my birth certificate it says Democrat.” Prager no longer is, but all of his relatives remain so and are well to the left of him on everything. But they still get along.

Prager is an orthodox Jew but also a friend of Christianity. At a previous event where he talked at length about the importance of religion, a woman, who identified herself as a Christian, told him after his talk that he was her favorite Jew. “No,” Prager replied, “I’m your second favorite Jew.” Good point.

Prager is a booster of religion but not of the ascetic variety. He says from a life-time of reading the Bible and the Talmud that he believes God created us to enjoy our time on Earth. “A lot of people have associated religiosity with non-enjoyment of life,” he said. But there’s no hair shirt in Prager’s closet. He says the best advertisements for the religious life are happy believers.

These happy believers are in stark contrast to leftists, an unhappy bunch almost by definition. “How can leftists be happy if they believe all of their neighbors are despicable?” Prager asked. “They don’t just think we’re (conservatives) wrong — we’re evil. A happy leftist is an oxymoron. I’ve never known a happy leftist.”

Prager said believers should not worry too much if they have occasional doubts. Every believer does, including Prager, he concedes. He reminded the group that “Israel” means “struggle with God.”

Prager worked over academe pretty hard, where, he says, fear of the leftists in charge is a powerful force, so that most students and faculty members who have any conservative beliefs or impulses keep them under wraps while on campus. His engagement with so many students over the years has led him to believe that most college students fall into one of three groups — those who believe the 100-proof leftism their professors feed them, those who suspect that what their professors are retailing is nonsense but don’t know what is true, and those who are drunk for four years and “are too plastered to remember what they’ve been told.” This last approach, he says tongue in cheek (I think), might work well if the student sobers up after he graduates, though this is hardly a good argument for the time and money spent at Whatsamatta U.

Prager is never a downbeat fellow, but he did admit to being a bit discouraged at how weak the resistance to the left’s various incursions has been. If there was a message he wanted to leave us with it was, “America is worth fighting for.” He’d like to see a little more of this. Wouldn’t we all?