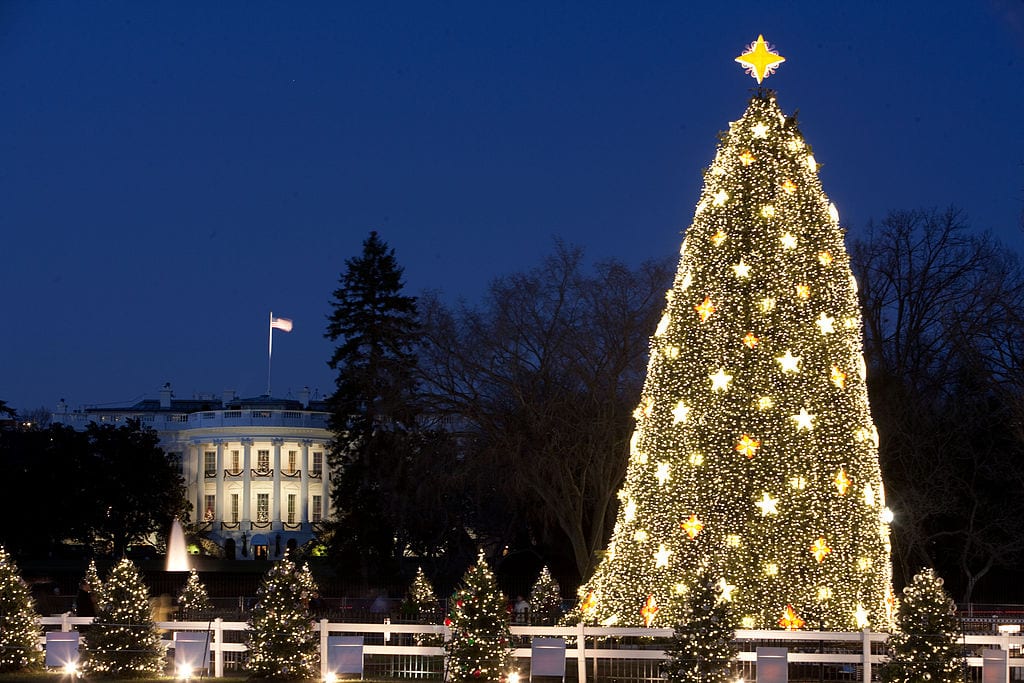 Christmas is a time of gifts, and they may be great gifts or small gifts. But it’s the thought that counts. But, the golden rule is, give, think not of getting, and you will get in the Lord’s good time.

These being the ground rules, the year ends with the liberals dishing it out and the administration dishing it back.

The administration, or what remains of it, is preparing to give ground in Syria and Afghanistan, which could be wise, but could be unwise, and the ones saying the latter are not liberals. Neither are they hawks or doves. They are of a disappearing avian species, the national security hard-noses.

There are those who say without General Jim Mattis, the administration loses one of its best minds, and the defense department its best secretary since George Marshall.

Mock them at your peril. They have kept America free. We owe them the X Article, the containment doctrine, the architecture of the ramparts of liberty.

It is perfectly true that we gave the peoples and tribes of the Middle East and South Asia more than they gave back. But the rule is to give with no thought of gratitude. Giving is its own reward.

No one ever claimed gifts are necessarily well managed. The madness of spending so much money, the even greater madness of spending American lives when clear cut victory was not the goal, verged on utter policy insanity. The sickening thought that men and women in charge of our government’s security policies persuaded themselves there were inadequate nationson those hard lands ruled by corrupt, cruel despots, that could be built into adequate ones, raises doubts about the durability of the universally admired American can-do.

At the very least we ought to admit there are things we can’t do. On this critical point, Donald Trump gives us the gift of honesty.

We can beat them but we can’t change them. Our gift was showing the Arabs (and the Pashtuns) that tyranny need not last for ever, as the profound and always-missed Fouad Ajami wrote. Too bad they spoiled it; but let’s admit we did some enabling.

That is why President Donald Trump’s Mideast-South Asian policy reconsideration is intuitively respectable. He is giving the American people a true, and sincere, short-term gift: let’s stop bleeding because of failed policies.

But it is also a gift to the bad guys, thus an invitation to more trouble. That, by all accounts, is what General (and Defense Secretary) Jim Mattis tried to tell him. He did not listen, by all accounts. He listened, by some accounts, to tyrants who wish us ill, notably Recip Erdogan and Vladimir Putin. This, one has to admit — lotta admitin’ goin’ on — is flabbergasting.

There is nothing wrong with saying our foreign policy since the end of the Reagan administration has stunk. Rich in good intentions, it has been dirt poor in execution. That is a fair argument, a respectable position.

I, personally, would wager that Gen. Mattis and many others — Gen. Stanley McChrystal, for one — would agree with this position. Only they would add: yes, stop the waste and the bleeding. But find a way to not make a gift to bad, wicked regimes run by evil men.

And there is a way — there always is. That is the true American can-do. There are allies who will share the burden. There are desperate men yearning to be free, notably the Kurds, who will fight, if only we will help them. This is not a matter of entangling alliances, but of getting a job done, and the job is to keep America secure.

There are others, who are not favorable to freedom but who are desperate to keep their wealth and privileges, who can be told to man up and fight. Saudis, Qataris, Emeratis, Egyptians, Paks: I never understood why we could not, ever since the first Gulf War, get it across to these people that we are not fooled. We know they are treacherous thieves, child rapists, woman-killers, fanatical crazed Muslims, and we also know they need us. They either do what we say — police your neighborhoods, or we let them sink into their mean games and failures, until the Persians get them, if they have not by then got one another. But then of course, our honor is on the line.

Coalition of the willing? Nice, idea, but sentimental. Coalition of the desperate would have worked better. The Emiratis provided some air power (including female fighter pilots) over Libya, and the Saudis have sent help to militia fighting the Persians and their allies in Syria. Decades ago they helped out against the Russians in Afghanistan, with Wahhabi strings attached. We could’a, should’a made them do better, and without Wahhabi commissars being part of the deal. Respect your allies, sure, and lean on your proxies.

It is not untypical of democratic government to have a good gift idea and then mismanage it. Perfectly sound in principle would be programs to give economic aid to Central American countries, creating growth in those places that will give their violence-plagued people incentives to stay home. This would complement border security, not replace it. We would have to expect much of that aid to be wasted and stolen; but there is a slightly better chance of limiting that kind of damage if we do not pretend we are building nations where what we are dealing with is turf-wars among murderous oligarchies, criminal gangs, and plain ordinary bad people.

Conservatives criticize Great Society welfare-state policies as good intentions with perverse consequences. You create welfare dependency in the name of benevolence, and you end up with urban blight, irresponsible parents, gangsters, murder-a-minute neighborhoods. Another Trump gift, despite all the foolish heckling about white supremacist racism, is that he is the first president since the Great Society to have advanced the jobs-are-better-than-handouts doctrine that leaders of disadvantaged sectors have long preferred, only to be ignored by condescending liberals and race hustlers who prefer keeping the poor on their political plantations.

Note in this regard, by the way, that Chicago, often rather hastily denounced by conservatives as a city ruined by failed liberal policies, actually is today one of the best places in the country to live. Almost all the appalling crime and social dysfunction are concentrated in a few broken down zones. This validates the conservative critique of welfare state liberalism all the more, but you should know what you are talking about.

The contagion spreads into the very functioning of capitalism, of course, and hurts, if it does not kill, the goose that lays the golden eggs. The stock market, to take that classic example, self-corrects runs of irrational exuberance. But it also responds to political chaos. And there is little doubt that the December Dive on Wall Street is due at least in part to the chaos in the Trump administration. But it is due even more to the unthinking obstruction by politicians, and some civil servants and high officials, whose jobs are to make governments work. The markets sense that if these people overthrow an elected government of the Republic, and, goaded by their left-wing, begin implementing triple-strength steroid versions of Great Society socialism, it’s curtains for the greatest economy in history.

Trump, with justification moving to reverse nearly three decades of shoddy, selfish, divisive government, went about his declared and elected task with a lack of finesse that was in many ways refreshing. But now the standoff with a Democratic House, not the shutdown but the prospects of a slow-moving coup, is causing a very cold shower on the Street, and that is not good, though maybe it will have a jolting effect and make everyone get real. (That is a wager I will not make.)

The obsession with the prez is a mean and mean-spirited gift, because it showcases the strength of our political system. The refusal of the liberals to respect democratic transitions of power, their obstruction of the government of the republic, would have tried the patience of a Solon. Utterly disproving the theses of the demagogic, nihilistic left, Donald Trump has not reacted in an authoritarian manner to their provocations and their resort to star-chamber tyranny. He has expressed frustration and anger, and why shouldn’t he? The presidency comes with a bully pulpit. No one expected Donald Trump to write and speak like Abraham Lincoln. His recent predecessors have been vacuous, often misleading. He is in-your-face, but he is honest about what he wants.

Our democracy is strong and we Americans believe in it, even if we may find grounds to doubt whether this holds for the elites that govern us. Deplorables, indeed. Guns and prayers, indeed. I have to say I suddenly — and briefly, I am sure — found myself in the cheering section of young Miss Octavio-Cortez, when she asked by what right those boondoggling incompetent rascals whose club she is about to join should not have their paychecks docked, since they brought about a government shut-down.

Compare with liberal France. A bit too much arrogant self-satisfaction there, and bang, revolution, anarchy. Demonstrators throwing cobbles and iron bars at policemen, who are there to protect them. Immediately, talk of regime-in-crisis, desperate attempts to quickly buy everybody off at once (including the cops). This is a solid republican regime? Led by a global climate change true-believer? Who is also an unreconstructed free migration liberal? A bon entendeur salut, they say in France, go figure.

The enemy is within the gates, striking just days before Christmas on the square before a great cathedral. Instead acting consequently and stating clearly that he will bring fear to the other side, the French president lambasts little Hungary for trying to protect itself from such barbarism. Okay, fair’s fair, Viktor Orban’s policy of self-defined illiberal democracy has its problems too, as the wave of recent demonstrations reveals. Liberal or illiberal, Europe has little to teach us, who remain the last, best land of hope and refuge.

A Constitutional Republic, a gift forever, if we can keep it. As with our Republic, so with Christmas, the forever gift of hope that the Lord gave to the Gentiles, through a ragged young Jewish family, His own people.