The Church of Baseball: The Making of Bull Durham: Home Runs, Bad Calls, Crazy Fights, and a Hit

I’ve spent many a happy hour in various pews of the Church of Baseball, and more than a few frustrating ones. After all, as the late great baseball commissioner Bart Giamatti put it, baseball is a game designed to break your heart. And it does.

The church has been greatly defiled of late, what with politics on the field, ear-splitting music between innings, players who are paid more in one season than an entire family makes in all of their lifetimes, ticket and beer prices from hell, nonsensical new statistics invented by computer jockeys who never even played Little League ball, and crackpot new rules handed down by a Harvard Law graduate commissioner who seems to neither understand nor love the game. Taking just one toxic example, the “ghost runner,” whereby at the start of each extra inning a runner is placed on second base in hopes he will score and conclude the game before it runs on too long. Too long for whom? The commish never says. This rule would be an insult to the cops and the firemen playing a Sunday afternoon slow-pitch softball game. 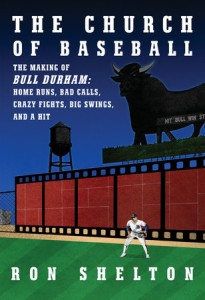 But these sins against the Grand Old Game are a subject for another day. Today I rise to celebrate 1988’s great baseball movie, Bull Durham, and to whoop up Ron Shelton’s fine new book about the joys and difficulties of bringing it to the screen. Shelton wrote and directed the classic movie, which very nearly didn’t get made. His book is a behind-the-scenes look at movie-making that will lead many readers to wonder how anything not an abuse of two hours of otherwise good time ever makes it to the silver screen.

Of those privileged to have seen it, there are few indeed who don’t agree that Bull Durham is the best baseball movie ever made. It has the feel of real minor league baseball — with exaggerations for comic effect of course — largely because Shelton played minor league ball for four seasons and therefore knew of what he wrote. His amusing chapters on his own baseball career from the bushes through AAA ball help make the book as entertaining as the movie.

The movie is virtually canonized now, declared in 2003 bySports Illustrated to be the best sports movie ever. But in 1988 studio heads were more than a bit skeptical of a movie about minor league baseball, demonstrating once again that movie makers, like book publishers, often don’t know what they’re looking for, even when it’s right in front of them. It didn’t help that as a director Shelton was then a raw rookie. Or that overseas sales would be thin in the majority of the world where baseball isn’t played.

The first major hurdle was financing. At the last available moment the last studio left to try, Orion, stepped up to the plate. But just because they put up the money didn’t mean they wouldn’t interfere at every step on matters of casting, editing, and which scenes should be included and which cut. Happily for the final cut of the movie, Shelton won most of these arguments.

The Church of Baseball is the spiritual home of the ditzy but dishy Annie Savoy, from whose viewpoint the story is told. She’s played pitch-perfectly by the ditzy but dishy Susan Sarandon. Annie is a baseball groupie who attends every game of the Class-A Durham Bulls baseball team. (Durham now has a new ball yard and a AAA team.) Her testimony opens the movie:

Annie’s theology includes sleeping with one Bulls player through the course of each season. “What I give them lasts a lifetime. What they give me lasts 140 games,” Annie says in just one of her memorable lines. This sets up an odd romantic triangle. The players are Annie; the talented but immature young pitching phenom, Ebbie Calvin “Nuke” LaLoosh, played by Tim Robbins; and Crash Davis, the solid and savvy veteran catcher who has spent all but 21 glorious days of his 15-year baseball career in the minors, played by Kevin Costner. Crash has the thankless job of mentoring and maturing “Nuke,” described as having “a million dollar arm and a five-cent head.” Nuke has a future in the bigs while Crash does not.

The girl winds up with the right guy in the end, as everyone knew she would. This unlikely love story plays out over the background of the ups and downs of a bush league baseball season, complete with long rides in a team bus that has seen its best days, crappy motels, bad food, and the kind of high jinks one would expect from young, testosterone-soaked ball players, many away from home for the first time. All of this told with a deft comic touch.

These are things that people who’ve seen the movie, a very large number by now, already know. What they don’t know, and what Shelton’s book lets readers in on, is how many battles had to be fought before Bull Durham could become the best baseball movie ever made. I can’t think of a better weekend entertainment plan than to read Shelton’s book and then watch the movie again.

Shelton is no longer a rookie director. He has a string of hits to his credit, including sports movies like Cobb, White Men Can’t Jump, and Tin Cup. No one knew it in 1988. But Ron Shelton was as promising a rookie as Nuke LaLoosh, with considerably more than a five-cent head. The Church of Baseball proves that he’s more than an able author as well.

Bull Durham surely remains Shelton’s most affecting movie. This was brought home to him when a couple introduced their two young sons to him — Nuke and Crash. Now that’s immortality.