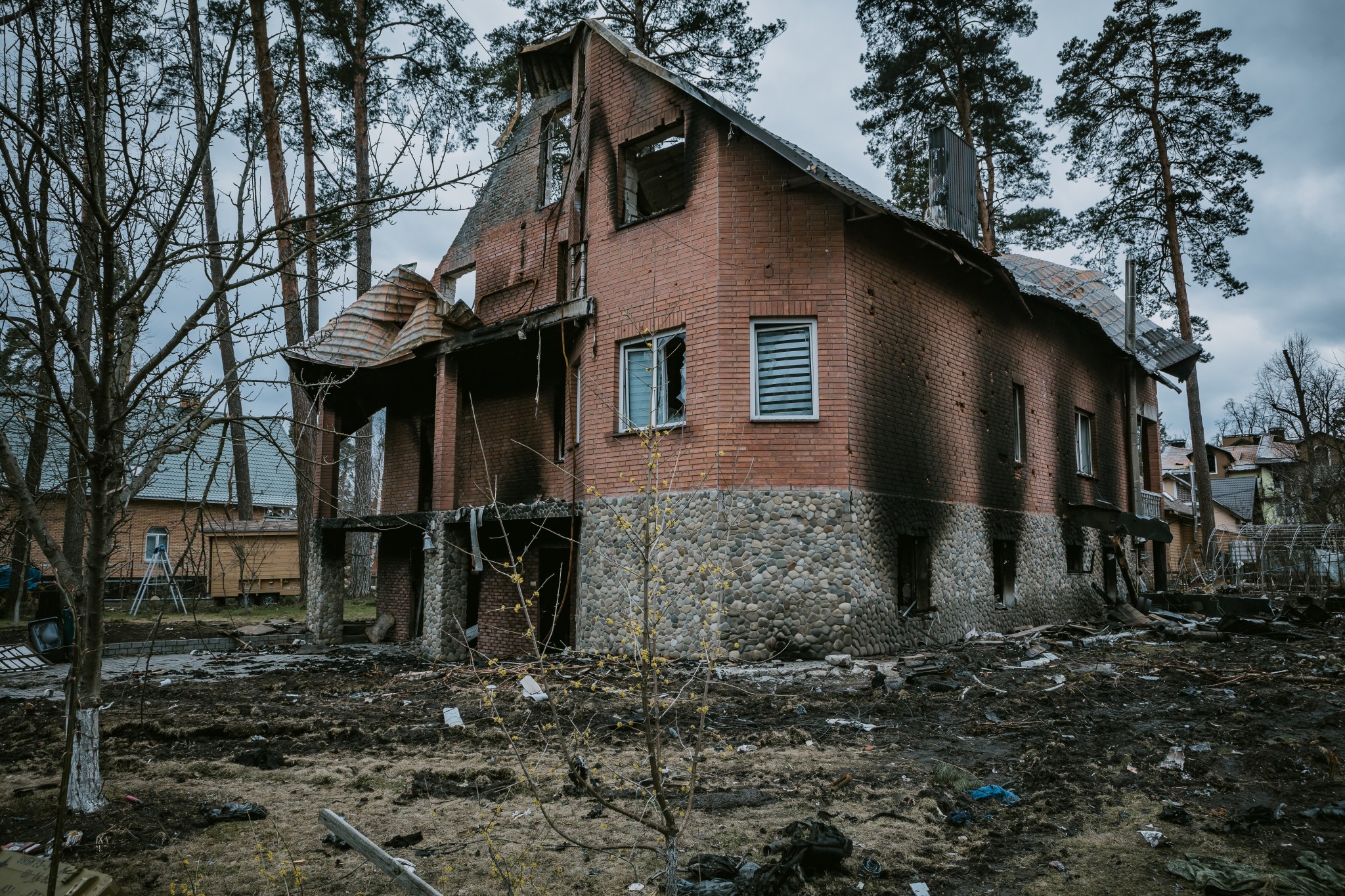 Nations, like people, have psychologies that make their behavior more predictable than they would otherwise be. Russia has since at least the late 17th century been an imperialist state willing to subjugate its neighbors by force of arms or by any other means, including the starvation of civilians.

After the Cold War, we were told that Russia was a new country, that it would live peacefully among its neighbors, and that it would only be interested in global trade and peace. Those of us who were more than skeptical of that idea were ridiculed as warmongers and worse, even when Russia conquered and annexed the Crimean Peninsula, a part of Ukraine, eight years ago.

Let’s remember that the Obama administration, with Joe Biden as vice president, did precisely nothing to help Ukraine resist Russian aggression.

It’s too much to expect that those who were so eager to proclaim a new peaceful, globalist Russia will admit that their ideas were literally blown up by Russia’s February 24 invasion of Ukraine. Russia’s invasion of Ukraine has been entirely brutal. Committing war crimes against the civilian population is apparently part of Russia’s strategy. They are perpetrated so often that it’s hard to keep track of them.

On March 7, this column illustrated — thanks to the help of Sonya Koshkina, a prominent Ukrainian journalist who is the editor-in-chief and part-owner of the Ukrainian news website Livyi Bereh — seven instances of Russian war crimes perpetrated in Ukraine since the invasion began on February 24.

Since that column was published, there has been a constant drumbeat of news of probable Russian war crimes. There was the killing of at least 50 people in a missile attack on a crowded train station at Kramatorsk a few days ago. There were many pictures published of the dozens of bodies who were tied with their hands behind their backs and then executed in Bucha, a city near Kyiv, Ukraine’s capital. There is even a report that a Russian portable crematorium was used to cover up evidence of war crimes.

There are many reports of Ukrainians trying to flee the war but being forcibly transported to Russia.

Any convictions of war crimes require proof before an international tribunal. The International Criminal Court, which reportedly is investigating the Russians’ crimes, is not going to be able to prosecute anyone because the ICC is totally political and because Russia won’t cooperate in the investigations.

Putin and his generals will never be punished for their war crimes because they are literally beyond the reach of international law. All we can do at this point is to assemble as much evidence of these crimes as we can in the hope that Putin and Russia can be properly labeled as evil at least as long as Putin’s regime is in power.

What has been lacking so far has been reliable witness statements on the Russian war crimes. The first, to my knowledge, has been the report published by Sonya Koshkina on her Ukrainian news website and written by one of her reporters, Nastya Ivanziv. It is a compelling recount of a Russian war crime by a direct witness who saw her mother murdered by Russian troops.

That report contains the statement of Tanya, a 22-year old girl who lives in Bucha. A picture of Tanya and her mother is in the article that published her statement.

As Tanya recounts, the Russians had cut off electricity and gas to her neighborhood, so her family began going to her grandmother’s house which had a wood stove so they could cook and stay relatively warm. Stores were closed after about the third day of the invasion.

Tanya’s statement is worth some long quotes. She said:

We first saw the Russian military when they drove into the courtyard of our house in a tank. Through the lawns, trees were felled. We were in the hallway and didn’t really look out. Then the locals said that, most likely, there was a wounded man among the military, because they were looking for a pharmacy. And we have a cross hanging on a pole next to it — the sign of the pharmacy. We heard glass breaking there, some screams. They grabbed something for themselves and drove off. This happened just as explosions were heard at Vokzalna street.

Near our house, there is a residential complex “Сontinent”. A week after the start of the war, the Russians were standing right in its yard. They robbed apartments, and the house itself was badly damaged. We heard shooting from there, apparently, at Gostomel. There they organized a certain headquarters for themselves. About two weeks ago, when there were peak battles, a column of eight units of all sorts of russian armored vehicles was being rebuilt in our yard.

Every time new equipment arrived, New Russians came and started robbing already robbed shops and apartments again. Once they opened the freezer and pulled out ice cream, which has been thawed for a month. They just threw it on the street. These days, we are already used to tanks, shots fired, and the fact that Russian military personnel can walk somewhere. You sit here, drink tea, look: a-ha, one tank went, back and forth, a-ha, the second one.

And then, on March 24, after searching her grandmother’s house, Russian soldiers murdered her mother.

After a search of my granny’s house, we packed food and thermoses in our backpacks, I covered myself with a white towel, my mother covered herself too, and we went home. Dad walked first, in front of me so that if someone shot, he would be a target because he was a man. My mother usually walked behind me, but for some reason she walked in front of me that day.

We heard gunfire, but somewhere far away. It happened all the time, we were used to it. Suddenly I heard a very loud shot, about fifty meters away. One of the three of us, most likely it was me, shouted, “GO DOWN!” It all happened in a few seconds. Mom had already fallen by then.

The shot was so loud that it deafened me in one ear, my ears tingled all evening. I checked my ear for blood. There was no blood. I looked up and saw my dad lying and looking at me. Mom didn’t move. He called to her, I understood that something was wrong, but I saw only her legs. I also started calling her, thinking that my mother was just hurt, but she did not respond. When I got up, I saw a bullet hole just between her eyebrows. That is, the Russians saw us through binoculars and targeted us. They shot exactly where they aimed. I shouted, “Mom, mom!” – but dad ordered to lie on the ground again and hide behind mother’s body. My dad cried out for help. He shouted in Russian that we were peaceful people, that we had no weapons. I seemed to be shouting something like “Look! you killed my mother!” But there was no reaction.

Tanya’s statement is the first direct testimony that Russians were killing civilians. There will be many more if investigators can enter Ukraine and gather the evidence necessary to convict Russians of war crimes.

The Russians, according to the UN, have mined vast areas of Ukraine, making it the most mined nation in the world. Mines don’t discriminate between civilians and the military. They kill whomever steps on them.

Russian forces are now gathering in eastern Ukraine to continue their campaign. May 9, on which Russians celebrate the end of World War II in Europe, is fast approaching. Putin may want to claim victory in Ukraine’s eastern Donbas region on that date to recover some of the credibility his forces have lost in their long campaign.

Russian forces should be expected to increase their attacks on all of Ukraine — including its civilians — before May 9 comes. Putin has put a new general in charge of the Ukraine invasion and more troops are coming to reinforce those already there.

President Joe Biden has called Putin an assortment of names, but he has done nothing to try to force a real investigation by a tribunal convened under the Geneva Conventions.

Even if such a tribunal were convened, it’s unlikely that they will be punished. The difference between the Nuremberg trials, which convicted many Nazis for war crimes, and any modern proceeding is that Russia hasn’t been defeated. It won’t cooperate with any trial. It won’t surrender the alleged criminals for prosecution.

The only thing we can do now is accumulate the statements of witnesses like the one reported by Nastya Ivanziv. The more of them that can be gathered, the longer the world can be made to remember what Russia has done and the war crimes it has perpetrated.