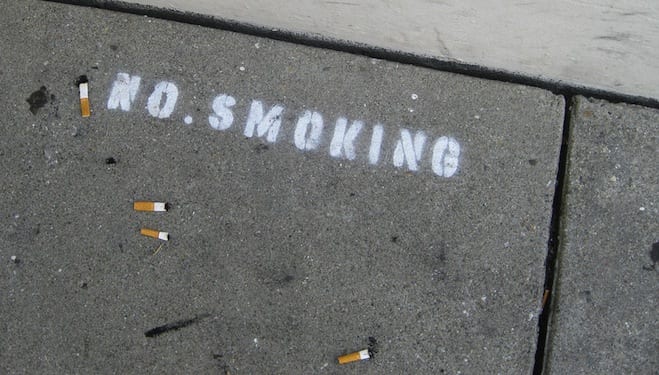 A FEW MONTHS back I was standing in a car park in the UK smoking a cigarette. Not one of those hideous underground car parks, but a nice one, in the open air. A woman in a white 2008 Fiat Panda drove two hundred yards over from her spot and pulled up next to me and wound down the window. “Your smoke is damaging my health, please put your cigarette out,” she said. I just stared at her, unable to speak. Her face was wreathed in this curious mixture of jubilation and vindictiveness and—I don’t think this is going too far—hatred. She hated me on sight. And she was utterly jubilant in being able to do so, that she had someone in her sights on whom she could exact her vituperation. Seeing me smoking satisfied some desperate craving within the woman, more desperate perhaps than the one I have which makes me smoke cigarettes. She may well have been driving around all day searching for someone to persecute. My guess is that she worked in a local government social services department, probably as a middle manager, and owned cats, but I cannot prove this. That may be just my prejudice coming through.

If she were a singularity, a lone eccentric, that might be OK and not really worthy of comment. But there’s a vast tranche of people like her over on this continent you lovingly refer to as Yerp; people desperate to loathe, to persecute. The Slovenian post-Marxist philosopher Slavoj Zizek suggests that, with fanatical anti-smokers, it’s a displacement activity, because they’re no longer allowed to hate other races, or homosexuals, or transgendered folk. Those targets have been removed, but still that deep-seated hunger needs to be sated somehow. So the smokers get it in the neck.

Either way, it’s an absolutist mindset and particularly prevalent in northern Europe. It’s something to do with the way we are conditioned to regard government. I think we swallow the guff that government is the untrammelled will of the people, regardless of how inept, vacuous, or wicked that government might be. We succumb utterly and insist that dissenters must face persecution. The smoking business is a useful indicator: Light up in Hamburg, or London, or Copenhagen and the vindictive hordes will descend upon you, their faces wreathed in fury. The same anti-smoking laws pertain in France and Spain and Italy too, but nobody takes them seriously, and still less so east of the River Oder where a refreshingly Slavic mentality holds sway. I was in a Polish hotel recently and asked the receptionist where I should go to smoke. He looked at me as if I were a madman, and requested—patently confused—that I repeat my inquiry. Eventually he shook his head and said, “Well, you can smoke right here, or in the restaurant, or in your room, or in the foyer, or in the elevator. I don’t care.” The Slavs are accustomed to governments lying to them, forcing them to adopt alien customs and being thoroughly corrupt and incompetent, I would guess. So they don’t take them too seriously. For the Slavs, governments are simply things to be a little wary of, rather than to obey to the letter of the law.

And, much though I expected otherwise, the USA seems to be similar, if for different historical reasons. A few years ago I traveled to New York and felt oppressed, in advance, by the stringency of your anti-smoking legislation. But I smoked right by the No Smoking sign outside JFK along with everyone else, and I smoked in the nice yellow taxi cab with the Mongolian driver’s blessing, and I smoked at my restaurant table outside on, what with a hugely endearing literalness, you call the sidewalk. Even today, in San Francisco—that most bien-pensant, achingly liberal and European of U.S. cities—I can find plenty of bars in which to smoke; bars which in the UK would be raided by the cops and the smokers hauled outside and the proprietors fined and put out of business. Americans see the sense in working around the laws a little, and they have a commendable resistance to notion of absolutism. This is not to say that you are entirely free from the monomaniacal and the berserk; merely that being monomaniacal and berserk is not intrinsic to the culture. And it makes me reconsider my instinctive and very liberal northern European attitude toward your stance on gun control; that the right to bear arms is, in the last resort, a safeguard against an overweening government. It’s a bottom line we, over here, simply cannot comprehend.