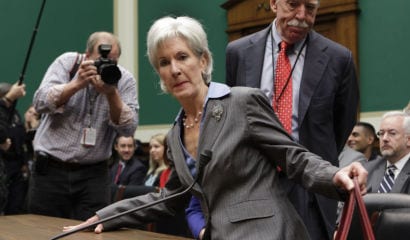 In Dante’s Inferno, the Eighth Circle of Hell is reserved for people who deliberately commit fraud. It isn’t surprising, then, that the poet populated this province of Perdition with politicians and their advisors. Interestingly, the latter were rendered especially uncomfortable. Whereas the politicians merely bathed in boiling pitch, their corrupt counselors were condemned to spend eternity in the actual flames. If the expression on her face was any guide, HHS Secretary Kathleen Sebelius felt that she had entered the Eighth Circle of Obamacare as she endured the questions of the House Energy and Commerce Committee on Wednesday.

The path to that infernal region was blazed for Sebelius on Tuesday by Marilyn Tavenner, the Administrator of the Centers for Medicare and Medicaid Services (CMS). Tavenner was tormented by GOP demons with questions about how many people had navigated the dysfunctional Healthcare.gov website and successfully enrolled in some insurance plan. She repeatedly declined to answer, but not because the data aren’t available: “We made the decision that we were not releasing the numbers until mid-November.” Naturally, Tavenner’s intransigence was received with ill-concealed irritation by several committee members.

But yesterday’s Sebelius hearing made the encounter with her CMS minion seem downright placid. One of its most contentious moments came near the end, when Colorado congressman Corey Gardner asked Madam Commissar why she hadn’t enrolled in a plan through the federal exchange. Sebelius replied that it was illegal: “I am not eligible for the exchange because I have coverage in my employer site.” This was, of course, an all too typical Sebelius lie. In fact, a visit to Healthcare.gov will make it blindingly obviousthat there are only three conditions that must be met to enroll in a plan via the federal exchange and Sebelius meets all of them.

Thus Gardner continued, “You can decide to drop your employer coverage,” and challenged her to join him in getting coverage through an exchange. Sebelius repeated her lie, “It’s illegal.” Realizing the video of this disagreement was going to go viral, the usual lefty suspects attempted to refute Rep. Gardner’s claim. The folks at ThinkProgress were quick off the mark with the assertionthat Sebelius is on Medicare, but are evidently too ignorant to know that her continued status as a federal employee means that Medicare is her secondary carrier. As she said, she gets her primary coverage through her employer. Thus, her excuse doesn’t hold water.

As entertaining as the Gardner-Sebelius confrontation was, it was by no means the most important issue discussed in the hearing. Far more significant was a security revelation brought out by a series of questions from Michigan congressman Mike Rogers. Rogers is the Chairman of the House Intelligence Committee, so his queries regarding potential security risks posed by Healthcare.gov were entirely predictable. The answers provided by Sebelius were, unfortunately, also easy to foresee. The sparks began to fly upward when he asked, “Are there any end-to-end security tests run after every new piece of code is put in the system?”

It was abundantly clear from the deer-in-the-headlights expression assumed by Sebelius that these tests haven’t been done, but also that she really doesn’t understand the significance of not carrying out such tests. So, Rogers explained, “You allowed the system to go forward with no encryption on back-up systems.…You accepted a risk on behalf of every user of this computer that put their personal financial information at risk because you did not even have the most basic end-to-end test on security of this system.” How significant is this? Very. It created a security flaw often exploited by hackers which went undetected until a few days ago.

One of the most excruciating ironies of the Sebelius hearing was her clear desire to avoid responsibility for the debacle. She began her testimony with an affected apology and a general declaration that she herself was accountable for the Healthcare.gov mess. But, on every specific issue raised by the committee, she shifted blame to her CMS administrator, the contractors who built the site, and even Verizon. The latter was blamed when the Chairman Fred Upton pointed out that the site had been down over the weekend and on the very morning of the hearing. Sebelius answered, “It is the Verizon server that failed—not Healthcare.gov.”

Likewise, Sebelius ducked responsibility for the decision not to include a “window-shopping” option on the Healthcare.gov site. As the Washington Post reported, “Technology experts have said if the feature had been included, it would have taken pressure off other parts of the site and prevented some of the problems that caused the system to fail.” When asked by Rep. Joe Pitts (R-PA) who made the decision to drop that feature, Sebelius blamed CMS administrator Marilyn Tavenner. And it goes without saying that Sebelius insinuated that the IT contractors were responsible for everything she could plausibly lay at their door.

So, yesterday’s hearing was yet another attempt to deceive the American public. This is the common thread that runs through the entire history of the ironically named “Affordable Care Act.” From the beginning, it has always been a gigantic fraud. And, if anyone deserves to languish in the Eighth Circle of Obamacare, it is the egregious Kathleen Sebelius. She is precisely the kind of corrupt counselor that Dante, whose experience with such creatures was considerable, had in mind when he wrote The Inferno. She may not deserve to go to Hell, but she certainly ought to be fired.