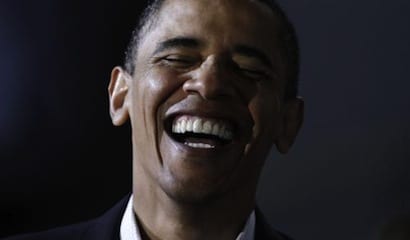 Wednesday evening the Obama administration extended the deadline for getting insurance coverage and avoiding the individual mandate penalty from February 15 to the end of the open enrollment period, March 31.

Administration officials said that they were just “clarifying” the law, but that’s hard to believe. Why didn’t they clarify it a month ago, instead of three weeks into a disastrous launch of the exchanges? Just a guess, but it might have something to do with the real possibility that people would pay a fine for failing to buy something through exchanges that they could not even access.

Anyway, as someone who opposes the individual mandate as a gross encroachment on liberty, it doesn’t seem like something I should get that worked up about. Yet also at issue is the “rule of law”—namely, does President Obama have the legal authority to do this? Clearly, he doesn’t.

The explanation is technical, so bear with me.

Under Obamacare, an individual can go without insurance for one day less than three months in any calendar year and avoid paying a fine. Once he hits three months without coverage, he must pay a fine for that time and any additional time he remains uninsured.

February 15 was supposed to be the last day to sign up for insurance on the exchange and avoid hitting the three-month limit. The reason is that health insurers require applicants to sign up for coverage by the 15th of the month for coverage that begins on the 1st of the following month. Thus, to qualify for insurance on the exchange that begins March 1, an applicant could sign up no later than February 15.

If he signs up after February 15, the soonest his coverage would begin is April 1. That violates the three-month limit for avoiding the fine. Yet by pushing the deadline back to March 31, Obama has allowed even people who don’t get coverage until May 1—i.e., no coverage for four months—to avoid the penalty under the individual mandate.

Here, specifically, is what the law says: Section 5000A(e) of Obamacare states, “EXEMPTIONS—No penalty shall be imposed…with respect to,” and then lists the conditions for an exemption. Section 5000A(e)(4)(A) states that one of those conditions is “Any month the last day of which occurred during a period in which the applicable individual was not covered by minimum essential coverage for a continuous period of less than 3 months.” (See pages128-130.)

“Less than 3 months.” It’s there in black letters. And Obama is going to ignore it.

But who is going to hold him accountable? Insurance companies? Well, they may lose some business if the mandate is not enforced as it was supposed to be, but they won’t dare risk the negative press by pushing back. Individuals? No sane individual is going to, say, go to court to have an Obamacare penalty enforced against him. The media? LOL! Indeed, Obama has already learned that he can ignore a law with impunity if it is unpopular, as was the case with the employer mandate.

One of the consequences of passing massive laws like Obamacare is they will have many parts politicians can ignore at their convenience. The sum effect Obamacare will have on the rule of law is not yet clear. But it won’t be a good one.